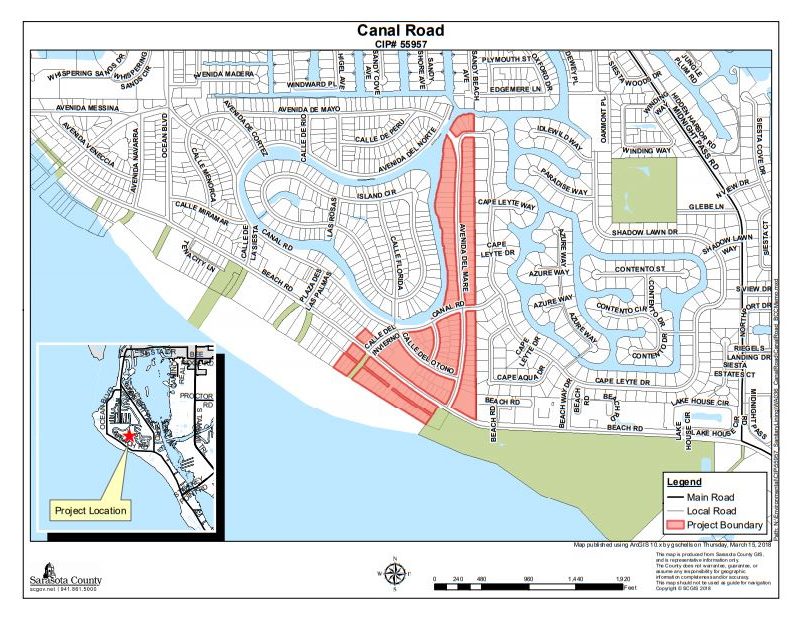 Quite a bit of sanitary sewer system rehab work is coming up on the Key this summer, thanks to two sets of votes the County Commission took in April.

One project — along Canal Road — was expected to get underway this week, the county Public Utilities Department staff told The Sarasota News Leader.

Some residents who received the mailer sent out on April 21 apparently thought Canal Road would be closed as the work proceeded — and that work is expected to take 150 days, the mailer noted. The time frame means completion “by the end of September 2018,” as the mailer put it.

In response to questions, Utilities staff reported in a May 4 email, “We do not usually close roads, but sometimes thru traffic is accommodated with flaggers depending on the set up.”

The card sent to residents notes that “brief, intermittent lane closures with flaggers on duty” will occur while the work is in progress. As usual with this type of situation, the cards urge pedestrians and motorists “to use caution while traveling through the area.”

The notice to proceed for construction was issued for Monday, May 7, the mailer added.

Memos the Public Utilities Department staff provided to the County Commission in April specified areas where “the existing vitrified sanitary sewer system” would be rehabilitated under a contract with the firm Insituform Technologies LLC. That is the same company that has handled similar work on the island in past months.

In each case, the staff memos said the residents would be notified by postcard of the construction “at least two weeks prior to the start of work.”

Upon completion of the projects, the staff memos explained, the longevity of the pipes is expected to have been extended by more than 50 years.

On April 10, the commissioners unanimously approved the following contracts as part of their votes on their Consent Agenda of routine business items:

On April 24, the commissioners approved two more projects, which are scheduled to start in the early fall and last through late fall, the memos note: