April’s 2016 Sarasota Film Festival (SFF) featured a wide range of films and personalities ranging from the iconic to home grown. It was kicked off in a blaze of glory as celebrated film star, Sophia Loren, was presented with the SFF Legend Award during her appearance at Van Wezel Performing Arts Hall. From the stage, Mark Famiglio, President of SFF, praised the beautiful Sophia as the Ultimate Renaissance Woman. 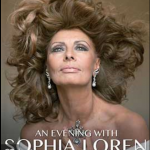 The auditorium was crowded with fans thrilled to be in the presence of this cinematic luminary. The set was simple: two chairs, one table, and one bouquet of flowers. Sophia Loren entered the stage on the arm of the host, Bill Harris, hobbling a bit from a twisted ankle suffered at the Sarasota airport. Might that possibly have been caused by the 4” spike heels she was wearing? No matter: she refused to yield to this fashionista war wound.

Wow— did that lady look glam! She was attired in bright red silk pajamas topped by a matching tunic that sent out flashes of glitter. Her gorgeous hair was lush and long, and no way did she look 82! The audience rose to its feet and cheered! “We love you!” cried a voice.

Once seated, Sophia proceeded to have a conversation with the host, giving audience members the feeling they were sitting across from her at a dinner party. She told tales of her wartime childhood, her marriage, and career. She didn’t sing, she didn’t dance, but her radiance filled the room. Occasionally, short clips of her most famous films appeared on a giant screen above her head.

In Sophia’s own words: “When I was 16, and Carlo (Ponti) was 38, he sent me a note. We were here in a garden.  It was summer. They were doing a beauty contest. He sent me a card. ‘Would you like to participate in the contest? I think you have a good chance to win.’ Even though I was so young, I was ready to work, so I found the courage. I went, I did not win, but it was a chance, a chance….”

“He had launched many actresses. ‘Could you come to the office?’ he asked.  Carlo made the screen test, but he did not like my face. ‘Let’s try another test,’ he said. I did the best I could, and it was so beautiful. He saw in me something even I did not know.”

The birth of a star! What a perfect opening for the Sarasota Film Festival!

This 10-day Festival was rich with cinematic experiences. Of local interest was a series of 8 short films shot in and around the Sarasota area. Varying in length from 1 to 24 minutes, five were narrative, two documentary, and one animated–the latter a powerful short dealing with child abuse, and produced by students from Ringling College of Art and Design. (The Invisible Truth, directed by Adrian Pumarejo & Jacob Ferguson.) 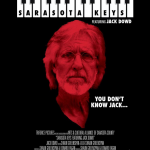 The longest documentary dealt with artist Jack Dowd, himself a Sarasota icon. In 2014, six pianos were designated to be decorated by six different artists, then placed on Sarasota streets, the idea being that bystanders were welcome to sit down and play.

Sarasota Keys Featuring Jack Dowd was shot over a 10-day period. Edward Fagan and Shaun Greenspan of TRI-FORCE PICTURES did a highly professional capturing the process of Jack artistically ornamenting his unique piano.

Now, Jack Dowd is a poised and entertaining guy, relaxed in front of camera. He sings, plays guitar, and clearly articulates what he is doing. The filmmakers chronicled the arrival at Jack’s studio of a plain wooden upright as well as its initial dismantling.  Then—piece by piece—the piano was painted in lush colors and covered with decoupage of Dowd art work. Prominent are faces from The 27 Club, Jack’s paintings of pop musicians who had died at the age of 27—Jim Morrison, Janice Joplin and the like. The piece de resistance came when a real guitar was painted, embellished and glued to the knee panel of the piano.

For the grand finale of the film, all six of the decorated pianos are seen clustered in a circle near Mattison’s on Main. A group of Sarasota’s finest sat down to play a six-piano concert, much to the delight of an assembled crowd, including Jack.

After capturing the footage in 2014, Edward Fagan and Shaun Greenspan turned their attention to other more pressing Tri-Force projects. As the 2016 Sarasota Film Festival approached, they raced ahead to finish Sarasota Keys Featuring Jack Dowd in time to enter. The result is a great little 24-minute film!

Elegantly filmed and polished, Wild Sarasota was directed by Darryl Saffer. It is filled with stunning footage of landscapes and animals shot in the picturesque habitats and ecosystems that surround Sarasota.  Not one human being is seen:  only gators, hawks, spiders, wading cranes, crows, flowers, Spanish moss, deer, tiny birds of every color, wild orchids, roseate spoonbills, caterpillars, insects, butterflies, and the like.

Wild Sarasota can be found on Youtube, and is well worth the 9 minute viewing. Darryl Saffer also has a web site: www.TheFieldJournal.net. Here his double award-winning "Florida Field Journal" films can be found.

Darryl’s work is focused on nature and natural history. His programs engage and educate the viewing public to care 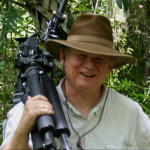 about the environment. Locally, the programs have been aired on Educational Channel 20, a facility located on the Suncoast Technical College campus in Sarasota, Florida. In a talk-back after the screening, Darryl said: “As a wildlife filmmaker, it takes forever! You’re constantly shooting and waiting for that special shot. The waiting…the patience…”

“…The mosquitoes!” chimed in another filmmaker. The audience laughed.