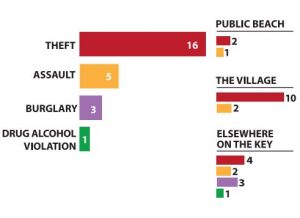 The manager of a south Siesta bar and restaurant reported there was a customer acting inappropriately with customers and staff members. The staff attempted to ignore the suspect and the man began to leave the establishment while carrying a beer. The manager and another staff member informed the suspect he was not allowed to carry an open container outside. The suspect ignored the advice. The manager eventually took the beer from the suspect, who became angry and punched him in the face with a closed fist. The manager and staff detained the suspect until the Sheriff’s Office arrived. The manager wished to press charges but did not want the suspect to go to jail. He wanted him to never return to the restaurant. A trespassing form was completed and the man was arrested with simple battery for intentionally striking the manager in the face.

Two patrons were thrown out of a Village bar during the “Turkey Trot.” According to the bouncers, both subjects were involved in a physical altercation inside the business, resulting in their removal. According to the victim, he was involved in a fight with an unknown male, which resulted in a laceration to his nose. He did not wish to pursue charges and signed a waiver of prosecution. According to the suspect, he admitted to punching the victim in the face but could not give a reason why.

A woman reported a theft had occurred a couple of day’s prior. On 11/23, she went to a Village restaurant. She walked up to the bar to order a drink and placed her cell phone on the counter. When she turned around a few minutes later, the phone was gone. The victim never saw anyone standing next to her and there were no witnesses. She tried to “ping” her phone to find it, but was unsuccessful since the phone was turned off. The iPhone 6 was valued at $500. The phone case also contained her driver’s license.

A woman visiting a village bar placed her purse under a motorcycle helmet which was located on the bar ledge, while she sat close to it. She began to interact with two females unknown to her. She stated that the females attempted to get her to dance all night in what she later believed to be an effort to distract and distance her from her purse. During the duration of her stay at the bar, she did not observe anything suspicious. When she went to leave, she realized her purse was gone. Video footage was obtained showing the suspect women moving the helmet to expose the purse. One of the women is later seen entering the main bar through the rear door, leaning against the bar, finally obtaining the purse and exiting through the rear door. A receipt was obtained, which, based on video footage and employee observations belonged to a friend of the suspect female.

A man reported an unknown suspect stole his wallet and its contents. He had left it unsecured and unattended under his beach towel at the Public Beach. His wallet contained a visa-prepaid card with a $40 balance and a Florida ID.

An unknown subject entered a man’s vehicle and removed several items. They included; a radio ($150), drill ($40), and cash ($70). The man advised he was at the incident location to conduct maintenance and usually takes the items with him but knew he would be done quickly so he left them in the vehicle. No forced entry was detected, as the truck was unlocked with the windows down and the keys in the ignition.

A woman reported that her light green ladies Schwinn bicycle with a basket on the front, valued at $200, had been stolen from in front of her home. An unknown suspect stole the bike, which was leaning on a tree in the front yard.