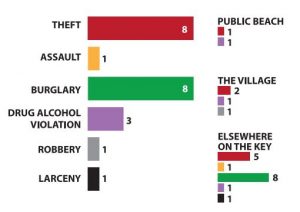 A man reported his bike stolen while he was dining at a Village restaurant. The bike was parked outside in a rack directly outside the business. He advised he had locked the wheel to the frame but not to the bars of the bike rack. The man stated he observed his bike multiple times from inside the establishment. Upon leaving, he discovered his bike, along with a credit card and driver’s license that had been on the bike, were gone. A taxi driver who frequents the area said he had been nearby and moved his vehicle in order to allow a van to pull up and park at the incident location. According to the witness, an unknown man got out of the van and began to load 5 bikes into his van. “Don’t think I’m stealing these bikes- they belong to my family,” he said to the witness. He then stated that he didn’t want his family driving them at night because they did not have reflectors. The witness ran into the suspect later and asked if he was able to fit all the bikes in his van to which the suspect replied yes and then left the area. Video footage will be obtained from nearby businesses for further inspection. The man’s bike, a Roubaix model, was valued at $3000.

Officers responded to a call in reference to a burglary that had occurred overnight. The incident was related to multiple similar cases on the same street within the same timeframe. Officers met with president of the community who stated he was made aware of a damaged front door in the complex. He then realized someone had forced entry overnight via the carport entrance door. He had not been in the unit to check for missing items and that the unit owner did not permanently reside there. He stated that there had been at least 5 other units in the complex that had been either burglarized or damaged overnight. All of the properties are currently unoccupied vacation rentals. In reference to this location, unknown suspects entered the victim’s garage and entered his Lexus. The victim found all of the car doors ajar after finding out about the other burglaries in the community. He did not notice anything missing from his vehicle or the garage.

A man was arrested for the possession of Marijuana after Deputies on mounted patrol smelled the strong odor coming out of a BMW parked in the public lot. After first walking by and smelling the odor again on a second trip past, deputies made contact with the occupants of the car. When the car door opened, the deputy smelled the odor on the man and in the vehicle. The suspect denied having any drugs in his possession. The officer found a baggie in the side door pocket where he was sitting, A search revealed two buds in his back left pocket, as well as rolling papers on his person.

The Maintenance Director for a South Siesta Condominium complex reported a theft. He stated sometime during the night, unknown suspects stole various light fixtures from the grounds. He has no suspects, although earlier in the night he had encountered trespassers on the property and advised them to leave and not to use the property as a pass through to get to the beach. The items stolen included 4 star shower light fixtures ($200) and 2 high-powered output LED lights ($120).

A man being transported to jail for an unrelated crime was charged for an additional crime after he stated he wanted to bring his backpack which was located in a friend’s vehicle. After identifying the backpack as his, the officer searched through it with consent and found a small baggie containing a pill later identified as Subutex, a schedule 3 controlled substance. Due to his level of impairment, the suspect was not asked about any possible prescriptions. A close friend at the scene advised he did not have a prescription. The pill was not found in a marked or labeled bottle. Based on the friend’s statement and evidence, the man was charged with the crime.

A man reported his Jon boat was taken from his backyard sometime between 1/4-1/6. The boat ($700) was on shore next to a canal and was flipped upside down. The man’s yard is overgrown and the boat was not visible to neighbors, who did not see anything out of the ordinary.

A man entered and requested help from night manager of a Village Bar at closing time. The man had obvious injury to his face and told the manager that several subjects had jumped him and took $400 out of his wallet. The victim fell in and out of consciousness as he described the 3-6 people he called “rednecks” to the manager. The manager recalled seeing people who fit the description in the bar earlier that night. An officer spoke with the victim who was hysterical and had trouble answering questions due to the incident and his level of intoxication. The victim, whose eye was swollen shut, was transported to the hospital. A witness stated that earlier that night, he had seen the victim being attacked and broke up the fight. When he returned to the scene after getting some help, he found the victim and the perpetrators all hugging and acting friendly and figured everything was OK.

A man reported he was contacted by mail for all residents to check their boats due to recent thefts in the area. He checked and discovered his Garmin GPS was stolen. No other items were taken. DNA swabs were taken from the 4 screws left behind and the console. The GPS was valued at $4000.