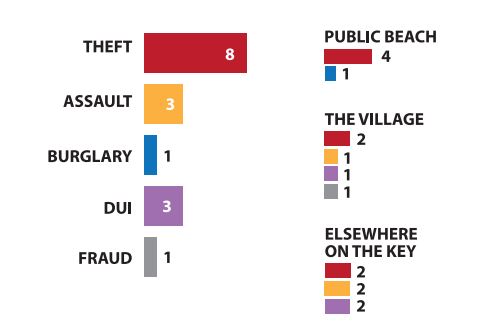 4/21/17 Burglary- Vehicle
Public Beach
A man reported an unknown person leaned inside his 2014 Ford Sedan while it was parked at the Public Beach lot and stole his wallet from the center console. The wallet contained his driver’s license, social security card and a credit card.

An officer stationary in his vehicle near the intersection of Avenida Messina and Canal Rd., noticed a car going through the four way stop without using his breaks until he was halfway through intersection. The officer fell in line behind the defendant and activated his emergency lights in reference to the traffic violation. The defendant drastically slowed his speed and continued to travel for nearly 500 feet before coming to a stop at Beach Access 2. As he approached the defendant, the officer noticed the driver’s thick-tongued speech, watery/ bloodshot eyes and the half empty travel bottle of Fireball Whiskey near his transmission. The defendant explained he had a disagreement with his significant other and had gone to a bar, although he could not recall which one. The defendant consented to a sobriety test after admitting how much he had to drink. He was placed under arrest after the field sobriety tests were completed.

An unknown subject stole a woman’s purse from the bar table where she and her husband were sitting. The purse contained her driver’s license, debit card and car ignition key. A search of the bar and dumpster proved negative. The woman’s debit card was cancelled without incident.

A man reported a vehicle burglary had occurred overnight. Someone had entered his 2015 Subaru van while it was parked at his home. He explained he had recently emptied the vehicle contents into two Lululemon bags before bringing it in for service. The bags contained; two umbrellas, some OTC medications, a Cobra Radar detector ($100), two Food and Wine cookbooks ($30) and three gift cards ($200). He advised he left the car unlocked and only noticed the bags were missing after he had been in and out of the car several times. The car was not dusted for prints due to this fact.

A man reported he was at the beach with family and friends. He was in the picnic table area surrounded by a large group of other beachgoers. Later in the day, when he returned to the table where he had left it, he realized his wallet and its contents were missing. The Gucci wallet contained; a driver’s license, social security card, a prepaid visa card and $150 in cash. The total value of all the missing items is estimated at $303. The victim searched around the table with negative results and questioned other subjects by the table. He stated no one was observed taking the wallet and there were no suspects.

A man reported the theft of his TREK Matte Black Street Bike, estimated value $450, from a bike rack. The bike had been secured in the rack by a combination type lock. The victim discovered that the cable lock, estimated value $20 had been broken and the bike was missing. There were no suspects.

A man who went for a swim in the gulf after wrapping his wallet in a towel and leaving it on the sand, returned after swimming to find his wallet gone. He could not recall what color lifeguard stand he was near when the incident occurred and he never saw anyone suspicious around his towel. The green camouflage wallet ($40) contained his driver’s license ($35), social security card ($75) and approximately $300 in cash.