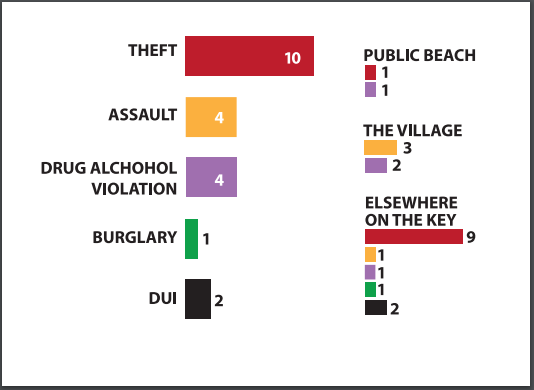 11/21/15 Petit Theft / 900 Block Seaside Drive
A woman advised that the battery from their Ranger four-wheeler is missing. The four–wheeler is usually kept out on the beach. She stated that sometime during the night, an unknown suspect took the battery. Its estimated value is $150. There was no video surveillance of the area where the four-wheeler was located.

11/25/15 Burglary- Vehicle / 1000 Block Portofino Drive
A man reported his unlocked car was burglarized during the night while it was parked at his condominium. He stated nothing was stolen but the contents of his glove box were scattered. There were no suspects.

11/25/15 Burglary – Vehicle / 1000 Block Portofino Drive
A woman reported an unknown person had burglarized her unlocked vehicle during the night. She advised she usually locks the vehicle. Two gift cards were stolen from the center console, while two other gift cards were not taken. A $20 bill was also taken.

11/28/15 Battery / 8000 Block Midnight Pass Rd
An officer was dispatched to investigate a battery. He made contact with a Sarasota County employee who is responsible for cleaning the campground. The employee stated he had shut down the bathrooms for cleaning when a woman wanting to take a shower approached him. The employee said she became agitated and yelled at him for closing the restrooms. She started taking pictures of the employee while continuing to yell at him. The man stated he took his phone out to take pictures of her when she knocked his phone out of his hand. Then, he stated, he shoved her away with an open hand to her shoulder area. According to the man, that was the end of the altercation and the parties separated. The officer made contact with the woman concerning the incident. She claimed that the employee became rude when she asked him when the bathrooms would be reopened. She said she felt intimidated by the man so she left and came back with her husband. She admitted to grabbing the employee’s cell phone while he was holding it.  She also stated that he hit her with a broom or mop, although she was not sure where on her back she was hit or how many times. She did not claim to have sustained any injuries. There were no independent witnesses to the incident. The officer determined that the woman was the primary aggressor in the physical altercation. The man stated he did not wish to press charges for battery and signed a waiver of prosecution. The man also did not want to take the time to complete a witness statement.

11/28/15 Stolen Vehicle / 5000 Block Sandy Cove Ave
Two men reported their boat was stolen during the night. They explained they had been on the boat the previous night before docking the boat and raising it on the lift. Both parties remembered hearing loud noises at around two in the morning. Shortly after hearing the noises, they looked outside and saw that the boat was gone. The men advised that the keys were not with or near the boat. They believe the boat had been towed away by another boat. It was described as Century, 18 foot,  white, center console, outboard 150hp Yamaha.

12/1/15 Stolen Vehicle / 5000 Block Midnight Pass Rd.
A woman reported her 2011 Buick 4 door was stolen from her driveway. She awoke in the night at approximately 1:50a.m. and saw her vehicle driving away with a dark colored truck. The woman has had other recent incidents involving her vehicle, including the theft of a laptop from her front seat. She stated the car had been locked and still had her keys on hand while talking with the officer. She stated she had lost her original set of keys some time ago and wasn’t sure where they wound up. Her vehicle has laser cut keys not easily replicated. The car is financed but she is current with the payments. There is no suspect and the woman does not have family members with access to the vehicle.

12/6/15 Battery / 200 Block Canal Rd
The loss prevention employee at a village market called the sheriff’s office to report a disturbance. The man reported that there were several subjects in front of the business that were highly intoxicated. Two unknown females began to vomit on the sidewalk in front of the business. The employee asked the women to leave the area since he would be the one cleaning up the vomit. A verbal altercation ensued between the females and the employee. Three men began to argue with the employee. One of them pushed him, almost causing him to fall to the ground. They exchanged a few curse words before the men left and the employee called authorities. The employee did not want to press battery charges and only wanted the subjects to stay away from the property. The video of the incident was consistent with the man’s statement. Deputies were able to locate the suspects in front of a village restaurant. All subjects were intoxicated and agitated about the situation. They were given trespass warnings and understood the consequences should they decide to return to the market.

12/8/15 Burglary- Vehicle / Public Beach
A man watching the sunset with two friends reported a theft. While his car was parked in the public lot, an unknown subject took credit cards out of a purse that was secured in the trunk. The man explained that as they were driving home from the beach, one of his friends got a call from her bank stating that her card was being used fraudulently. When they arrived home the ladies both checked their purses and found all the contents (including cash) to be present, except for the credit cards. The man was certain the car was secure after it was parked and the beach. There was no damage to the vehicle. It was unclear how the suspects were able to access the trunk.