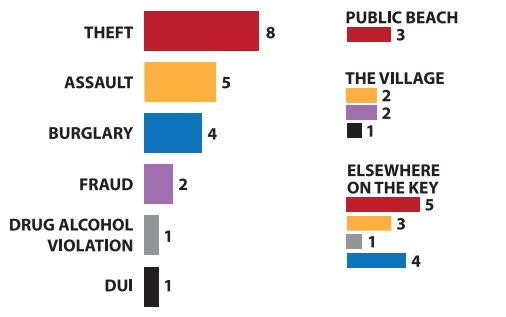 The manager of a Village bar filed a report with the Sheriff’s Department after a customer ran up a bar tab and did not pay his bill. The defendant had presented a credit card to the bartender to open a tab. After making several purchases that appeared to be questionable, the bartender processed the credit card and it was declined as “no account”. The defendant was identified by his drivers license, which was presented earlier, as per bar policy. The defendant stated he would return the next day to pay his $160 tab in cash in exchange for his license. However, he never returned with the cash.

A woman made a cryptic call to the Sheriff’s Office giving her address, stopped talking after hearing a male voice, and then hung up. When deputies arrived on the scene, the woman stated her husband had battered her by pushing her in the shoulder. She stated that the suspect was asleep on the couch before he woke up and battered the victim for no reason. According to deputies, her demeanor was quite agitated at the time and she appeared to be possibly intoxicated or having memory or mental health issues. The suspect confirmed that his wife acts very differently and that she does have considerable health issues. The suspect explained that although he tries to keep alcohol out of the house, his wife is able to call the local liquor store to have it delivered. The victim had no visible injuries and was not complaining of any injury. She would not cooperate with deputies. When asked if there was any thing else deputies could do for her, she quickly snapped back “No! Goodbye!”

A woman reported someone had gone through her unlocked car and rummaged through the glove box and center console. Items from both areas were left out on the passenger seat. The woman also discovered a backpack, which, she said, was not known to her or members of her family, behind the passenger seat. The bag was later discovered to be her husband’s gym bag, which he always keeps in his car. He couldn’t remember if he had locked his car but was able to identify the bag and its contents. While no items were missing from the initial vehicle, it appeared an unknown subject entered both vehicles, taking the backpack from one and placing it into the other. There were no other leads or suspects.

An employee and representative of an island resort reported that a suspect rented a room from 8/8/16-8/11/16, incurring a charge of $455.96. The man paid with a credit card and the transaction was completed. The complainant stated that 10 days following the transaction, he received a notice that it was being disputed due to the cardholder reporting the charge as fraudulent and not authorized. The total amount had been charged back to the business. The complainant provided a copy of the disputed claim notification.

Two bicycles and a bike pump were reported stolen from inside a garage. The items taken included a red & white Electra cruiser bike valued at $250. Also taken was a turquoise and orange Villy’s custom limited edition cruiser with an estimated value of $767.44. There appeared to be no forced entry and no video footage available.

A cabinet company and its employee renovating a vacant home were the victims of a burglary. The complainant/victim had stored his equipment out of sight in a rear closet of the home. The doors and windows were locked prior to the victim leaving for the night. Upon his return in the morning, he noticed all of his items missing. There were no signs of forced entry to the home however, one slider was found slightly ajar. The complainant had several of his own items taken including: a Porter Cable radio ($100) Porter Cable sawzall ($60), battery charger ($40) and a rechargeable battery ($70). His employer, the cabinet company, also had several items taken; Makita concrete saw ($600), Bosch jackhammer ($1500), Makita Jackhammer ($867), blades ($180). Upright heap air filter ($1150) and a shovel ($30). All of the items were stenciled with the company name and phone number, likely with orange paint.

Officers were dispatched to a home regarding a family disturbance. They met with a woman who admitted she had slapped her daughter in the face over some loud music that was being played at 4 in the morning. A scuffle had apparently broken out between the mother and daughter. The daughter had multiple lacerations on her body that were unexplainable. A witness and a sister of the victim who tried to break up the fight were unaware of the extent of the victim’s injuries and were not sure where they came from. The victim said she could not remember. Based on the evidence, statements and admission, the officer believed the mother should be charged with domestic battery and she was transported to the County Jail.

A man reported an unknown subject entered his unlocked Jeep and stole several items. The items included credit cards, $200 cash and a computer worth $600. He had already made contact with the credit card company and they advised no new activity had occurred.

Say ‘I do’ with the sand between your toes