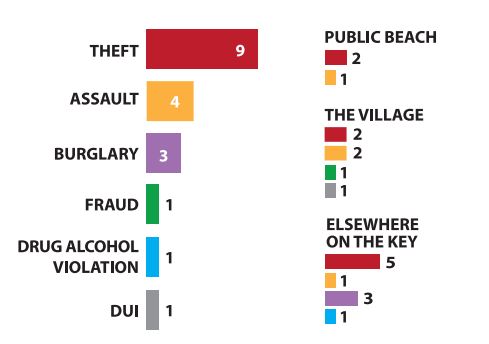 A man reported a vehicle burglary that occurred in August. His car had been parked at the public lot when someone entered his car and stole his wallet and a laptop. The man explained he had been having trouble with his key fob and power locks and assumes the door locks had not properly functioned, leaving his car unlocked at the time of theft. The wallet contained four credit cards, a birth certificate, and Connecticut gun permit. Also stolen were a wedding ring ($850) and a MacBook Pro ($2300) No criminal activity on the cards had been reported. There are no suspects.

A gun was reported stolen from a rental vehicle. The car had been parked overnight in a driveway. The Semi Automatic Smith and Wesson Model SW VE handgun ($400) was taken from the center console of the vehicle. There were 14 rounds in the magazine. The victim would be returning to Georgia the following day and said he would call back with the serial number.

A man called to report an unknown person(s) had entered an unsecure residence that is currently under construction. A Westinghouse flat screen monitor ($110), a Ryobi Sawzall ($ 80) and Ryobi Drill ($99) were taken from the master bedroom area. There were no serial numbers available for the items taken.

An officer responded to a village bar in reference to a battery. The manager stated that a male subject had been escorted out of the bar after security witnessed the subject grab the buttocks of a waitress, twice. The man fought with staff and was placed on the ground. The subject, who appeared intoxicated, had blood on his lip and could not explain what had happened. He stated several times that he knew the owner of the bar and that he may become the new owner after this incident. The waitress explained that she had told the man not to touch her buttocks after he did it the first time but that he did it again. She said that he also grabbed her wrist before security escorted him away. She wanted the incident documented but did not wish to press charges. The manager asked that the subject be trespassed from the property.

An officer was called to a disturbance between a man and a woman in a village parking lot. The victim said she and the suspect were in an argument because he wanted her to give him money and that the suspect had grabbed her neck. She wanted to file charges against the defendant for battery. She said she and the defendant are not married, do not have children together and have never lived together. She and the suspect explained that they went to get married, but never validated the marriage license and that the man had never battered her in the past. The suspect said he and the victim had been arguing because she had agreed to get a hotel together, but then she refused. The couple are homeless and have been seen hanging out together around the Key. Officers did not see any visible signs of injury and witnesses said they saw no violence, only a lot of yelling. The victim completed the domestic violence paperwork. She got on a bus and left the Key and the suspect left on foot in the opposite direction.

The manager of a village grocery reported a theft. According to the manager, a man entered the store, grabbed some cheese from a shelf and placed it in his cargo pants. He then attempted to buy a bag of chips. When it was discovered that he didn’t have enough money, he put the chips back and walked towards the exit of the store with the cheese still in his pocket. When the manager confronted him about the cheese, he took it out of his pocket, gave it back and ran out of the store. He was later identified and placed under arrest for petit theft. The suspect has multiple prior petit theft convictions.

An unknown suspect entered onto a condominium property and removed an ATV that the business uses on the beach. The manager stated that she had possession of the keys and that the suspects must have rolled it on to a truck or trailer in order to remove it.

A man returning to his home after the storm noticed a window on the east side of his residence was open. He assumed it had to do with the storm and checked his residence. He noticed two Omega watches ($800 each) were missing from his upstairs bedroom nightstand. He checked the dishwasher where he stored a jewelry box. That box which contained a gold bracelet and several other pieces of jewelry ($900) was also missing. The scene was examined and pry marks were found on the window, possibly from a screwdriver. The man said his neighbors had nothing missing from their homes and didn’t observe anything suspicious.