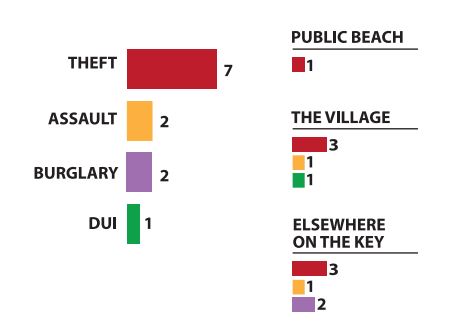 The manager of a Village nightclub approached an officer on foot patrol to report an unknown female had struck her on the side of her face. The manager had been trying to help the female get a ride home due to her level of intoxication. She stated that the woman hit her in the face with a closed fist because she couldn’t remember her name. Video footage of the incident was obtained and placed into evidence. The woman was transported to the county jail.

An employee of a village restaurant discovered the license plate stolen from his motorcycle as he left work at the end of the day. The theft occurred sometime during his 11:00 a.m. – 6:00 p.m. shift.

A homeless man was arrested for stealing a can of Mike’s Hard Mango Drink from a Village grocery store. An employee of the store noticed the man place the merchandise in his pants before walking out without paying. This was not the first time the man had stolen from the store.

A woman reported her license plate was stolen off her car while it was parked in her driveway. The theft occurred sometime between 9/29-9/30/16

A lawn statue of an egret was reported stolen. The complainant stated that while he was out of town from 9/30-10/5, someone uprooted the turf and flora surrounding the statue. The ornament had been anchored into the ground using pvc piping. The complainant noted that he arrived home shortly after garbage pick up and brought up the possibility of scrappers who usually roam the area just before pickup as being suspect.

A woman reported some designer purses stolen from her residence. The purses were taken from a storage closet located directly to the right of her front door. There were no signs of forced entry. The victim stated she had last seen the purses in January of 2016. She also advised that she was not originally going to report this incident until a friend told her she should do so before filing with her insurance company. The bags stolen included a Gucci, valued at $1500 and a Louis Vuitton, valued at $2000.

A man reported he parked his car in his driveway and must have forgotten to lock it. Sometime between 10/11-10/12, someone entered his car and took 5 golf clubs, valued at over $1000. The unknown subject also took a handicapped placard out of the glove box and a wooden cane from the backseat. The golf clubs had been stored in the trunk of the car. There were no known subjects or witnesses.