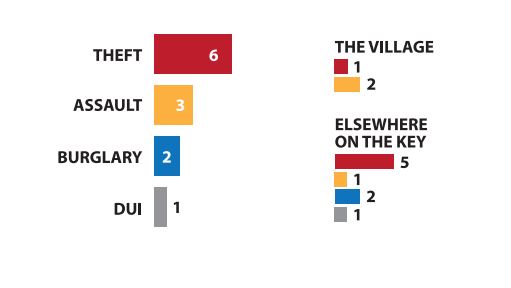 A man left his cell phone on the beach in the area of Turtle Beach. Someone else found the phone and set it by a wall at 9000 Blind Pass Rd. Another unknown person found the phone and took it. The victim electronically locked the phone and sent a text message requesting a call back from whoever had his phone.  The victim received a call back from a man who negotiated $100 to return it. The suspect returned to the area. A maintenance man who was aware of the situation managed to snatch the phone from the suspect. Meanwhile, the victim’s wife had taken a photo of the suspect from a distance. The suspect drove away in a Pontiac G8. He later sent a text message relating that he still had the phone’s memory card and would not return it. Several attempts were made to contact the suspect. They were unsuccessful.

Officers responded to a battery at a Village restaurant. The victim had a laceration to the face and explained that he had been accused of stealing a wallet and was struck in the face by an unknown male. He stated that even if the suspect was located, he did not wish to press charges and wanted to leave. Officers attempted to have him sign a waiver of prosecution but he was drunk, uncooperative and covered in blood. According to the complainant, an employee of the restaurant, she received a complaint from the suspect that someone stole his wallet. Video cameras revealed the victim was in the vicinity of the suspect’s wallet before it was taken but there was no proof that he had taken it. When the suspect approached the victim to ask about the wallet, the victim pushed him and swung at him but missed. The suspect stated when the victim did this he struck him one time to get the victim away from him. Probable cause could not be determined due to the fact that the victim did not wish to press charges and failed to cooperate. It was also noted that the victim was ordered to never return to the establishment because he has caused disturbances there in the past.

A part time resident reported a theft. She stated that sometime between October 2016-Januuary 2017 unknown person(s) took miscellaneous clothing from her apartment. She was out of town at the time and stated that the maintenance personnel and an unknown cleaning crew had access to the apartment. There was no evidence of forced entry. The clothing was valued at $4000. The victim filed the report for insurance purposes.

A woman reported she checked on her brother’s residence and found someone had thrown eggs all over the driveway and garage. The driveway is long and would not facilitate a drive by egging. It is assumed someone must have entered the fenced in yard. The driveway gate was still locked. Estimated cost to clean the garage door and driveway is $200. The woman named a suspect she assumes is possibly involved because the suspect believes that the owner of the house’s business manager is using the house to conduct liaisons with the suspect’s wife.

A man reported that an unknown person removed his bicycle from Access 12. The bike was secured to the access gate with a cable lock. The lock had been cut and the cable was left behind. The bike is a Specialized brand bike valued at $700. It is described as a men’s mountain style with bullhorn handlebars. It is neon green with black trim. The victim’s initials are on the bottom of the crankcase.

A woman advised she left her wristlet purse on a table in a Village bar and walked around taking pictures. She discovered her purse was missing when she attempted to pay her bill. The staff searched the premises for her bag with negative results. The purse was later recovered in the area of Access 3 on the beach and returned to the victim. The contents of her bag  (credit card, driver’s license and keys) were all present except for $65 cash.

A Deputy responded to a call in reference to a domestic battery. The victim explained she and her fiancé of six months were involved in a physical altercation. She said the two began arguing over her car keys. She explained that when she attempted to leave the area and locate her car, her fiancé followed her to a nearby parking lot, pushed her into a bush and grabbed her keys. She stated that she attempted to get the defendant away from her and in the process struck him several times with the keys causing puncture wounds. Based on the interview with the victim, probable cause was found to charge the defendant with domestic battery. She suffered no visible injury but had grass and dirt on her from being pushed into the dirt. The defendant suffered minor puncture wounds due to the victim’s attempt to get away. She refused to make a sworn witness statement

A residence under construction was burglarized. The home is a shell with windows and some doors installed. No door hardware (locks and handles) has been installed. A table saw and miter saw were being stored on the second story of the residence. The tools were locked together with a cable and padlock. An unknown subject cut the cable with a hacksaw. The table saw was taken but the miter saw was left behind. The home is in a gated community and has controlled access but no video cameras. The pedestrian gates are left open.