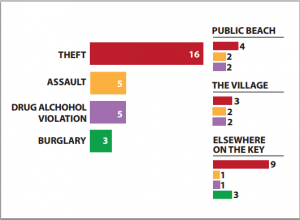 10/25/15 Petit Theft
A purple ladies bicycle, valued at $299.99, was stolen from in front of The Old Salty Dog Bar. The bike was left unlocked while the victim was inside the Bar.

5000 Block Ocean Blvd, 11/1/15 Burglary –Vehicle, Public Beach
A woman flagged down a patrol officer to complain someone had attempted to break into her vehicle. She indicated she had parked her Buick in the lot for approximately 30 minutes. Upon her return to the car she found her steering column broken off and wires exposed. The vehicle had been locked, however, the rear side passenger window had been partially down allowing access to open the door. Upon further inspection, the officer noticed the suspect had placed a large object in the ignition in an attempt to steal the car. The cost of damage to the car was approximately $200.

11/3/15 Grand Theft / Whispering Sands Drive
A woman reported that someone took two pieces of jewelry that were on a table outside her bathroom.  She stated that the only people inside her residence besides herself were two employees from a pest control company who were there for a service call approximately two weeks prior. The missing jewelry consisted of a ring, valued at $400 and a necklace, valued at $300.

11/6/15 Burglary – Vehicle, Public Beach
A man visiting the beach with his girlfriend and fried reported his rental car was burglarized. When the group returned to their car they noticed the man’s credit cards were missing from his wallet that he kept in the driver’s door panel. The center console of the car was left open and the friend’s iPad and his $700 in cash were also missing. When his girlfriend returned to the car she found her 5 credit cards were missing from her purse. All of the victims stated they had locked the vehicle when they left the car around 4:00 that afternoon: however no signs of forced entry were found and the windows were up according to the group. The investigating officer was able to obtain two sets of DNA samples from the center console and placed them into evidence. He was also able to view e-mails and text messages sent to the couple’s phones from the credit card companies declining charges and issuing a fraud alert. The messages were sent at 5:55p.m. The location of the purchase attempt was at Nordstrom’s in Tampa. The suspects attempted numerous other purchases at 5:55 with almost all the cards stolen, in separate amounts totaling between $636.65 and $834.60.

11/7/15 Battery – Injuries, 6000 Block Midnight Pass Rd
Officers responded to a report of a battery. The victim stated that he and the suspect had been in a verbal altercation in the parking lot of the Sniki Tiki, when the suspect head butted him in the face. The officer noted the victim’s eye was swollen although he stated he did not want medical attention. The officer checked the surrounding area for the suspect with negative results. The victim stated that he knows the suspects family and repeatedly explained that he did not want to pursue a battery investigation. He only wanted the incident documented so that the suspect would get help for his anger issues. No further action was taken.

11/7/15 Burglary – Residential, 4000 Block Banyan Pl.
An employee of a management company was sent to check one of his properties after receiving a complaint of squatters at the foreclosed home. When he arrived, he saw a white towel stuffed in the metal door to the small apartment on the front of the property. The towel was not there when he had last been to the vacant property a month prior. When the man entered the apartment he found the rear sliding doors open, a can that appeared to be used for smoking crack, the toilet clogged, and a multi -colored towel stuffed inside. He said it appeared someone had lifted the sliding doors off the track in order to gain entry. The resident next door said she recognized the towel as missing from her kitchen. An officer took DNA swabs from the rear door handle and toilet seat and submitted them for processing.

11/8/15 Burglary- Vehicle, Public Beach
A man reported a vehicle burglary to a patrolling officer. He advised someone entered his trunk and took his golf clubs, his wife’s purse, and a beach chair. The man explained he had parked his car at 5:00 and returned to the car at 5:30 to grab a beach chair and noticed the items missing. The vehicle was locked; however, the victim believes he might have accidentally popped the trunk while the keys were in his pocket. The approximate value of the stolen items is $1350.

11/13/15 Trafficking in Cannabis/Possession of Cannabis with Intent/ Possession of Cocaine with Intent, 100 Block Avenida Veneccia
A man was arrested at his apartment after officials apprehended a package of approximately 27 pounds of cannabis intended for delivery to the suspects address via the US postal service. The package was brought to the Sheriff’s office by a US postal inspector who had executed a federal search warrant on the package. The inspector attempted to make a controlled delivery of the package to the suspect, who claimed he could not get to the door and to leave the package at the front door. An officer with the Sheriff’s Department made contact and identified himself to the suspect who then let the men in. He was placed under arrest. The officer obtained a search warrant and found an additional 33.7 pounds of cannabis, 11.2g of cocaine, .3g of MDMA. 132.3g of butane hash oil and 1.1g of Adderall in the man’s apartment.