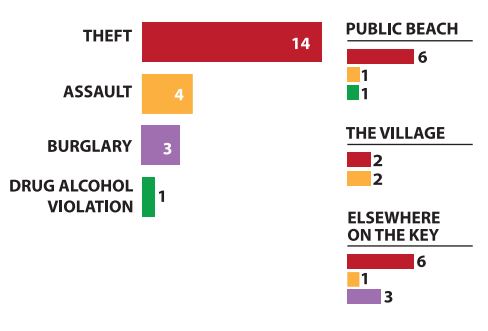 A man reported his Mercedes burglarized during the night. The car had been parked in his driveway. Three dollars cash and a Rolex watch were stolen from the center console. The watch was valued at $40,000. The car was not locked.

A man said sometime during the night, an unknown person removed various items from his unlocked car. A Dell laptop ($500), HP laptop ($200) and camera bag ($25) were among the items missing. He said he and his family had been in and out of the car loading it to return home, having all the doors opened and closed, before they noticed the missing items. For this reason the car was unable to be processed for fingerprints.

A man was arrested for battery at the Sunday night drum circle. A deputy on patrol noticed an altercation in progress. The deputy separated three men and a large group of individuals inside the drumming area, including the defendant. According to the victims, they were inside the drumming area preaching their gospel while holding signs when the large group approached them. The group started to batter the three men, while also pulling on their camera equipment. The victims were able to identify one of the individuals that attacked them. They did not receive any injuries, and the only thing harmed were the signs they were holding. According to the defendant he was upset that the men were protesting the drum circle, and providing negative energy to the group as a whole. The victims regularly attend the drum circle, protesting it’s meaning.

A woman flagged down a deputy regarding a bicycle theft. She was on vacation and had been provided a bicycle by the rental property. She rode the bike to a nearby restaurant for lunch and left it out front unsecured while she ate. When she left the restaurant, she noticed the bike was gone. There were no nearby security cameras to record the incident.

A man left his residence for the night. The next morning, his father came to do yard work and noticed a light on in the home. Knowing that his son was not at home, he contacted him. The man returned home to find a rear sliding glass door open and the front door unlocked. Both doors had visible pry marks. All kitchen cabinet doors were open and the upstairs of the residence had been rummaged through. The man said no one had permission to enter the property. Items taken included: 50” Samsung TV ($800), 2 Vera Wang comforters ($300 each), 48” Samsung TV ($600), and 2 silver lamps ($240). There were no witnesses but fingerprints were submitted.

A deputy responded to a call from the Bee Ridge Rd Fire Department. They had a patient in the driver’s seat of a car who was unable to drive. The deputy made contact with the sleepy driver who said he hadn’t slept much the night before. He observed a large pile of clothes sitting on the front seat with tags and hangers still on them. The items were not in a bag. The defendant was wearing a shirt with stickers still on it, indicating it was new. The deputy contacted the store named on the tags where the owner reported he had watched video footage of the person who took the clothing without paying. The clothing was outside the store on clearance racks when the defendant stole them. The owner of the store wished to press charges for retail theft. The clothing was valued at $691.92

A man reported he went to the concession stand at the pavilion and bought several items. As he walked back to the beach, two men approached him and handed him a cell phone. The man checked his pockets and realized the phone was his. He realized he had forgotten to zip the pocket on his pants and noticed his wallet also fell out. He retraced his steps in the sand until he found his wallet. $1000 in assorted bills were missing from inside. He checked the area but was unable to locate his money.

The men who returned his phone had no information about the wallet.

A man who left his backpack unsecured at the drum circle returned to find it stolen. The backpack contained a key, 2 towels, a NY driver’s license, credit card and $220 in cash. There was no suspect or witness information.