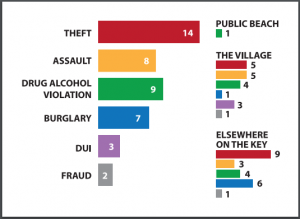 The property manager for a condominium complex reported that when he had arrived to work that morning, he noticed that his company’s utility cart (valued at $3988.42) was missing. The manager said he had last seen the cart the night before at around 8:00 p.m. He said the keys to the cart were still located in the office and that there was no way to secure the vehicle since it is an open door style. Deputies had been dispatched to this address the night before in reference to suspicious activity, which involved two white males, trying door handles on parked vehicles. When the males left the area, they were seen leaving in a red color golf cart type vehicle. A couple hours after the cart was reported as stolen, it was located by a deputy, halfway in a ditch, on Colonial Oaks Blvd. At this location, there were several white males, approximately 17 years old, wearing no shirts trying to pull the cart out of the ditch with 4 wheelers. Upon police arrival, all suspects left the area. The vehicle was unable to be fingerprinted due to the muddy water on the vehicle. There was no visible damage to the vehicle.

A man reported 4 kite-boarding items stolen from his residence. The victim said he had kept the equipment stored on the inside of his garage bay. He stated he had been having cabinets installed at his property that week and that one of the men who had been working at his house has a history of thefts and dealing in stolen property. No contact could be made with that subject. The equipment had a total value of approximately $5370.

A deputy responded to a call. The victim advised that a white male wearing black shorts, no shirt shaved head and “scruff” on his face was in their backyard and attempted to open their sliding glass doors. The victim confronted and yelled at the suspect, who ran away at that time. The victim’s husband observed the suspect and informed the deputy of his possible location. The deputy was able to locate the suspect wandering on a nearby street. The suspect, who matched the victim’s description, had no reason to be at this location and stated that he was looking at all the “beauty.” The deputy questioned the suspect about being in the victim’s backyard and trying to open the slider. The defendant stated he was overtaken by the beauty of Siesta Key and didn’t realize what he was doing.

A man reported that he was dining at a village restaurant with his family when a bathroom emergency arose causing him to enter the bathroom expeditiously. While in the bathroom, the complainant removed his firearm, a Smith and Wesson M&P 9mm from his pocket and rested it on the toilet paper dispenser while he used the facilities. Upon completing his business he returned to his vehicle to change his clothes and realized that he left his firearm in the restroom. He returned to the restroom to find the firearm was no longer on the toilet paper dispenser. The complainant remembered seeing a man enter the restroom just after him and saw this man sitting at the bar. He confronted the man and asked him if he had his firearm and the subject responded “no”. The complainant then contacted the restaurant manager as well as the sheriffs department to advise of the situation. The manager reviewed the security camera footage which showed the white male enter the bathroom immediately after the complainant. The white male, who had left the restaurant by this time, was unknown to the employees and had paid his bill with cash. The complainant was advised to contact the sheriff’s Office with the firearm serial number as soon as possible.

A county employee called the sheriff’s department to the beach pavilion when a man there screamed for help. The man, who refused an ambulance, was highly intoxicated and sitting on a bench with abrasions to his knee and elbow. The victim claimed he was walking, but could not say exactly where, when he was approached by a group of white males. He said the males surrounded him and pushed him to the ground, which resulted in the abrasions. The suspects fled the area after the man, who walks with a crutch, threatened to defend himself. The victim said one of the suspects drives a brown or tan truck and is at the beach every night and in the early mornings. The caller had not seen any other subjects in the area and the victim was unable to give any further description of the suspects.

A man reported his tan 1998 GMC custom Hummer stolen from his residence. He stated that on the night before he had parked the car outside and brought his keys into his house. The next morning when he went outside, he noticed his car was missing. The car had no windows and no roof and only one set of keys. The vehicle also had “Bummer” engraved on the back. The officer did a search of the surrounding area and was able to locate the car parked in the Turtle Beach parking lot. It did not appear that the vehicle ignition had been tampered with and there was no visible damage to the vehicle. The complainant was told to call the Sheriff’s office if anything is later found to be missing.

A man called to report someone had stolen his blue recliner chair and ottoman. He stated he had recently bought the condo and had numerous contractor workers and real estate agents inside. These people all had keys to the condo. The man stated that anyone who entered the condo should have known that the recliner was his property. The man said he would make some phone calls and also contact condo security to see if anything was recorded. He also said he would update the Sheriff’s office if he gets any information or somehow a mistake was made and he gets the recliner back.

A man reported that sometime during the month of November 2015, an unknown suspect used his name and personal information without his knowledge in order to open two National Grid Utilities accounts. The man reported the accounts were opened for service to his former address in Providence, Rhode Island. He believes the tenants who moved in after him are the suspects, but he had no information about them. The balances on the accounts were $300 and $85.

Greetings from the Gulf: Thank you Walt, from a ways away but forever close to my heart

Florida: the perils and profits of pot