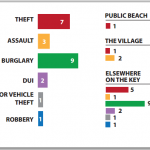 A 22 year old man reported that an unknown black male in his early to mid-20’s with a scruffy beard and wearing a gray hoodie held a silver, possibly .45 caliber handgun to his head. He stated he observed the subject flee the scene east towards Midnight Pass Rd. and heard the sound of a vehicle speeding Northbound. The victim stated that he had been walking towards the front entrance on the west side towards his car in the parking lot when the unknown male approached him from behind and put a gun to his head. The suspect told the victim to continue to walk towards his vehicle. Once at the vehicle the victim got in the driver’s seat and the suspect sat in the passenger seat. The suspect then demanded the victim give him his marijuana. When the victim stated that he had no marijuana and offered him the thirty dollars he had, the suspect knocked the money out of his hand and told him he wanted his cell phone. The victim told him the phone had messages from his dead mother on it. The suspect threw the phone on the dashboard and demanded his jewelry. At this time, the victim said no and got out of the car to yell for help and run. The suspect got out of the car and ran westbound. The complex had four cameras at the entrance to the building. Officers watched the complex’s surveillance video. At no time were they able to locate a black male or possible suspect in the video. The camera covered the direction the victim stated the suspect had fled.

1/28/14 Burglary/ Felony 6000 Block Midnight Pass Rd:
A woman reported some of her jewelry stolen from the condominium she was renting. Her unit can be accessed from the beach by easily walking in the open courtyard. It appears the point of entry was the rear sliding glass doors. The doors were off their track and appeared to have been simply pushed up to deactivate the lock. Once entry was gained the bedroom was the only area targeted. The incident is most likely related to another break in down the street during the same time frame.

1/31/14 Grand Theft Auto 6000 Block Sabal Drive:
A news reporter for ABC News contacted the sheriff’s office to report the company-owned vehicle he uses was stolen. The reporter was at the location taking exterior footage from the street of the house at the incident location. While filming, a female (later learned to be the defendant) approached the reporter and confronted him about why he was there. The reporter told her he was on a public road. The defendant grabbed the front lens of the reporter’s camera. She then took the camera’s tri-pod, opened the front door of the reporter’s vehicle and placed it inside. She then entered the vehicle and drove it down the road to Old Stickney Point Rd. She abandoned it at a nearby bank parking lot. The camera the reporter had been operating filmed the majority of the incident. The video was placed into Sheriff’s office property. The reporter originally did not wish to pursue charges against the defendant. When questioned, she stated that she felt threatened when the reporter turned around in her driveway and that she “did what she had to do.” She refused to answer any further questions. The reporter later called the officer to say that the news station had decided to pursue theft charges against the defendant.

2/6/14 Burglary/ Felony 900 Block Beach Rd:
A woman reported that she observed some pieces of gold jewelry missing from her jewelry box. The box sits on her dresser in her bedroom. One of the drawers in the box was opened and eleven pieces of jewelry were removed. The box originally contained about 100 pieces of jewelry. Only 11 items were missing and the rest remained untouched. Five of the pieces removed were one half of a set of earrings. There were no signs of forced entry to either the front door or the rear slider. The officer noticed that the rear slider was located directly next to the community pool. The victim stated that she leaves the slider open when she is at the pool but “watches it constantly”.

2/9/14 Burglary/ Felony 6000 Block Midnight Pass Rd:
A man stated that when he went out to lunch and tried to pay for it, he noticed all the money in his wallet was missing. The money from his wife’s pocketbook was also missing. The man believes someone entered his rental unit while they were at the beach. The couple is sure they locked the unit while at the beach. The deadbolt was not used, just the doorknob lock. The wallet was on the dresser in the bedroom. The purse was also in the bedroom. The officer noticed no signs of forced entry.

2/16/14 Burglary/ Felony 6000 Bock Midnight Pass Rd:
A woman reported a gold necklace stolen from an ashtray on her dresser. As she was preparing dinner she opened her kitchen window. She noticed that the screen seemed especially clean. Upon further examination, she noticed that the screen was missing and had been completely removed from the frame. She then looked for her jewelry and noticed that her necklace was missing. Her other jewelry was untouched. She knew that her neighbor had been broken into recently so she had been hiding her jewelry. She had only left the necklace out earlier because she had planned on wearing it later that day. The victim believed nothing else had been touched but the officer noticed a few other things had been disturbed. It appears the suspect had been looking in the closet for other hidden valuables. This incident is very similar to others occurring on the Key. The unit is easily accessed from the beach. The unit next door was also burglarized recently.

After the big one – Post-disaster planning ramps back up

The 37th annual Light Up Siesta Village Holiday Parade will be held Saturday, Nov. 26. Festivities start at 5 p.m., beginning at Siesta Center Plaza, 5053 Ocean Blvd.New this year is the judging and awarding of prizes for parade entries.To enter, visit siestakeychamber.chambermaster.com/eventregistration/register/1666.

Get pictures with Santa Paws at Boatyard

The Boatyard Waterfront Bar & Grill will host a “Pictures with Santa Paws” event from noon to 4 p.m. Dec. 3. Bring your fur babies for a photo with Santa and other activities. Proceeds benefit the Humane Society of Sarasota County. The restaurant is located at 1500 Stickney Point Rd. near the south bridge to […]

A handful of establishments on Siesta Key will be open on Thanksgiving and serving a holiday meal. Among them are:

Turkey Trot is Nov. 23 in the Village

The annual Turkey Trot pub crawl on the “Block that Roxx” will be held Nov. 23 in the Siesta Key Village. Seven businesses will be hosting the event: Siesta Key Oyster Bar, Daiquiri Deck, MVP, Beach Club, The Hub, Blase Cafe, and Gilligan’s. Pick up a pre-sale wristband at any location.

Five Siesta Key Village establishments are participating in a pub crawl on Dec. 10 with our furry friends in mind. All proceeds will benefit the Humane Society of Sarasota County. Check in at the Salty Dog between 11 a.m. and 1 p.m. and meet some adorable adoptable dogs!