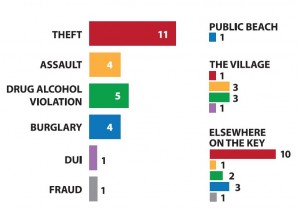 A man parked his silver 2012 Toyota Camry at the beach lot at approximately 1:30pm. When he returned later that afternoon, it was gone. There was no record of the vehicle being towed and the owner said all car payments had been made. The car had been locked and there were no keys with the vehicle.

An employee of a church reported someone had broken into the business. She had last been there at 1:30 that afternoon when she left for the day. She stated that the only other people who had been at the church that day were those attending a meeting that took place at 7pm that night. When the woman returned to the church later that night, the deadbolts to the front door were open. There were signs of forced entry with a glass windowpane broken. It appeared someone had gained access through the front door after unlocking it. The unknown subject went into four offices in the building, opened a single drawer in each office, and left. Nothing was reported missing, but the employee found it very strange that someone would break in and not take anything. There were no possible suspects and due to weather conditions, the officer was unable to canvass the area. However, fingerprints and DNA swabs were obtained for processing.

A woman reported a lawn ornament valued at $500 was stolen from her front yard. The ornament had been unsecured and was described as a black resin sheep.

A woman called her out of town neighbor to report that his home had been burglarized while he was away. The neighbor noticed the garage door was open. She approached the residence and observed the front door had been forced open. Drawers throughout the house were open and rummaged through. The items that appeared to be missing were two 40-inch Samsung televisions, one in the living room and one in the master. Another television was missing from a guest bedroom. The homeowner stated that prior to leaving town, he had numerous contractors working on his house. Prints lifted from the door handle and DNA swabs taken from drawer handles were submitted into evidence.

A supervisor of the lifeguards at the public beach said an unknown suspect forced entry into the red and the yellow lifeguard stands and committed a burglary. Both of the pad lock latches were pried from the wooden doors in order to gain entry. The suspect also removed a beach umbrella from the red stand and threw it down on the sand. Items stolen from the red stand included 2 screwdrivers and a first aid kit, total valued at approximately $58. A medical equipment item, 2 scuba jackets and a vest valued at approximately  $450 were taken from the yellow stand.

A man reported his hat was taken that evening. He stated he was having beverages at the bar with a group of six individuals he had met at the bar. He stated that the suspect saw his black ball cap with “MCQ” and “Jesuit” stitched onto it and thought it was funny. He stated that the suspect asked if he could swap hats quickly, and the suspect gave the victim his hat in exchange for the victim’s hat. The suspect then stated that he had to go to his vacation condo across the street, left with the victim’s hat and never came back. The victim did not have any other information about the suspect aside from his name. He believed the man had clearly had too many alcoholic beverages and took his hat accidentally. He did not want to press charges at this time and believes he will get his hat back the following day. He asked the officer to follow up and call him with the results.

Officers responded to a call regarding a fight at a nightclub. The victim, who was obviously intoxicated, explained that he was at the jukebox selecting music when a man came up behind him and punched him on the right side of his face. The victim stated he did not suffer any injuries, but did fall to the ground. The victim believes the subject hit him because he did not like his choice in music. During the investigation, several bar patrons informed the officer that the victim was causing a disturbance inside the bar prior to the incident.