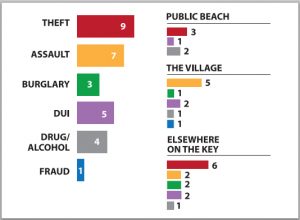 An officer responded to a disturbance at a bar in the village. At the time of his arrival, bouncers were holding a male subject on the ground. The officer was attempting to talk to the subject on the ground when a woman became loud and irate. He tried to talk to the woman to conduct the investigation but she was uncooperative, yelling and screaming. He asked the woman, who was friends with the male subject, for identification but she refused and ran away down Ocean Blvd., The woman then came back and was in the middle of the street, yelling and cursing; ” record them, record them!” She ran away again and was followed by deputies. She was intoxicated and causing a disturbance of the peace. The deputy ordered her to stop but she ran into the street in front of a car and almost caused an accident. While she was running, she called 911 and stated she was running from the police. A deputy finally caught up with the woman and placed her under arrest. The woman was transported to jail without incident. The manager of the bar wrote a witness statement.

A man called The Sheriff’s Office because his brother, the victim, was traveling back home. He said he and his brother were sitting on the beach behind the home. They spoke with two unknown females who were walking by on the beach, later identified as “Kris” and “Chris”. The man said the two females, who said they were from Tampa, stayed overnight. When they woke up the next morning, the victim’s ipad was missing. The man said they had “snap chatted’ with one of the subjects. She claimed she had found the ipad in the backseat of her car and would return it before the victim had to leave town, but she failed to return it. The man said the “find my ipad” app had been shut off, but his brother had sent Apple a message to disable the ipad. The man said if it is returned, he does not think his brother will want to pursue the matter any further.

A man reported that while he was away on vacation between 6/1 and 6/30/14, three firearms were stolen from the garage of his home. The man stated that he moved into a different house shortly after returning from vacation and thought that the firearms were in with the packed items that were to be moved and were stored in the garage. However, after moving to the new home and unpacking the final box, he realized the firearms were not there. The man stated that his mom had a habit of leaving the garage door open. He assumes that an unknown person entered the garage while the door was open and stole the firearms. The stolen items included a Smith and Wesson semi-automatic pistol and a Springfield semi automatic pistol.

Two witnesses advised that a female suspect was seen taking money out of an unattended wallet on the beach. As the suspect walked out of the water, she was identified as the person observed taking money out of the wallet. The victim was located and advised that 3, hundred-dollar bills were missing from his wallet. The witnesses stated that they had observed at least 1, hundred-dollar bill taken. The suspect was also observed eating the victims’ food valued at $10.00. During the investigation, the boyfriend of the suspect was located but not implicated in the crime. The suspect stated that she took money out of her boyfriend’s wallet but could not say how much money she had taken. She also gave conflicting statements about where she placed the money. It was not believable that she had mistakenly picked up the victim’s wallet, thinking it was her boyfriend’s. The suspect was detained and taken up to the Beach Office. Her boyfriend was left on the beach and was able to pay back the victim in $20.00 bills. The victim declined to press charges so a waiver was signed and the suspect was released.

A woman called the Sheriff’s Office to report someone had entered her vehicle and stolen her purse while it was parked at the main beach parking lot. She stated she left her purse in the vehicle’s trunk. She also stated that the vehicles door locks do not work so the vehicle is never properly locked. She stated there were fishing poles and other items in the trunk, but the only item taken was the purse. The purse contained cash, a driver’s license and other cards and papers. There are no suspects or witnesses in the crime.

A woman reported unknown person entered her vehicle and stole a purse containing a driver’s license, an ipod touch, other cards and papers and some clothing. The vehicle was parked in the main parking lot of Siesta Beach. The victim stated she could not remember if the vehicle’s doors were locked. There were no signs of forced entry. There were no witnesses or suspects.