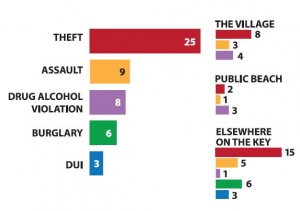 A condominium security guard contacted a man, approximately 75 years old, loading brick pavers from the rear of the condominium into his vehicle. When the guard asked the man what he was doing, the man replied, “building a patio” and drove away. The guard believes this man may be the same suspect responsible for thefts of other items and pavers during the last couple of weeks.

A man filed a report regarding a theft. His truck was unattended at beach access #12 between the hours of 4:30-5:30 p.m. During this time an unknown subject stole the “Liquid Force” kite board that was in the bed of the pickup truck. It was valued at $1000.

A village bar patron reported that on the prior evening he had laid his jacket over his chair at the bar while he headed out to the dance floor. When he returned to his chair, his jacket along with all of his belongings in the jacket pockets, were gone. The man stated that a bouncer had later found his jacket in the restroom and returned it to him. The patron’s pockets had contained $150 in currency as well as a Louis Vuitton bi fold wallet valued at $120. The security camera system at the establishment was not working at the time of the theft and there were no witnesses.

A woman reported her 2007 green Kia Sportage, was stolen from the parking lot behind a village bar. She stated that she had parked the car in the lot at approximately 11p.m. The windows were up and the doors were locked. When she returned at around 12:30 a.m., the car was gone. Inside the car was her purse, which contained $70 in cash, her driver’s license and her phone. The victim said she still had the only set of keys for the car. There were no reports of the car being towed from this location. A BOLO was issued. There is no suspect information.

A man arrived at his rental property to discover damage to his unit as well as evidence that one or more people have been living at the unit for up to three days. The man stated that no one had rented the property during this timeframe. A wood screen door was lying on the ground, broken in pieces. The sliding glass door had been tampered with and a broken screwdriver was found on the floor beside it. The complainant found one or more beds had been slept in and there were dirty cereal bowls in the sink. Garbage was strewn about the yard near the hot tub. The man had no suspects but did state his residence had also been burglarized last year during Spring Break. Estimated damage to the screen door was $250 and $125 for the sliding door.

An eighteen-year-old man was arrested after an investigation related to a traffic accident revealed narcotics hidden under the driver’s seat. An officer was interviewing a passenger in front of the defendant’s vehicle when he smelled the distinct odor of marijuana emanating from the car. After a brief investigation, the defendant admitted that there was approximately 10 grams of marijuana located under the driver’s seat. The officer was able to find a black pouch containing a digital scale, 13.2 grams of marijuana, and 2.6 grams of hash oil (also known as Dab).

The clerk of a Village convenience store reported a theft. She stated that five subjects between the ages of 17-20 entered the store. Several of the subjects attempted to distract her while one stole 15 toquito food items and 9 hot dogs from the grill, all valued at $29.31. The clerk explained that the suspect put all of the items in his pocket before leaving the store. The description of the suspects also matched the subjects who entered a Village clothing store and shoplifted items from there, as well. One of the suspects, a seventeen-year-old male was later apprehended and released to his legal guardian after signing a civil court citation and agreeing to contact the court within 10 days.

A man reported that sometime between 3/8-3/15, an unknown suspect entered his yacht and took multiple items. The 2002 54 ft Bay Liner was docked behind his home. The complainant believes the yacht was locked, but there was no sign of forced entry.  A crow bar and a rubber glove were found in the living quarters. The man’s rod and reels were taken, as well as some scuba equipment, a TV and a sheet set. The value of the missing items was more than $3700.

Other news on Siesta Key