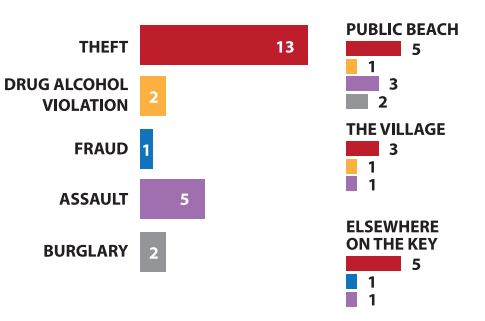 A man reported that an unknown suspect used his name, Social security number and other personal information in order to open six Sprint cellular phone accounts in his name. He stated the fraudulent activity was discovered prior to the accounts being opened; therefore, no charges were cleared through his accounts. At the time of the report, it was unknown if the attempts were made in person, by phone or over the Internet.

A woman discovered her Mother’s charm bracelet, valued at $10,000 was missing from her jewelry box. The box was kept in a drawer under the bathroom vanity. The victim knew the bracelet was there before a cleaning service came to clean prior to her leaving for vacation. Upon her return, she was not able to find the bracelet anywhere in the house. The victim had used the cleaning service before and never had any issues with the service. She provided a phone number for the business and said if she were to get the bracelet back, she would not pursue the matter any further.

A man reported his kayak stolen from the deck behind his home. The theft occurred sometime between 2/14-2/25. The yellow kayak was valued at $1000. According to the victim, there had been no unusually large amounts of rain or extremely high tides that could have washed the kayak off the deck and set it adrift. Workers working across the canal from the victim’s residence did not see anyone or anything unusual in the area.

A woman terminated from her job at a south Siesta resort left with the office telephone and keys. The suspect advised she would return the items the next morning but failed to do so. A deputy contacted the woman who explained that she was late due to a doctor’s appointment and would be dropping off the items later that day. The complainant did not wish to pursue the matter any further and signed a waiver of prosecution.

Unknown suspect(s) removed three signs from the gate to the maintenance parking area at the public beach. The signs were “No Parking”, “Do Not Enter” and “Private property Sarasota County Government”.

An eighteen-year-old man reported his close friend battered him. He advised that earlier in the day the suspect had misunderstood comments and took them as derogatory towards his family. The suspect told the victim, “The next time I see you, I’m going to kick your …” When the two met at the beach, a confrontation occurred. The suspect allegedly punched the victim several times and kicked him in the leg. After the incident, the complainant went home and went to sleep. In the morning after telling his family what happened, they insisted he go to the hospital and call the police. After being advised he had no serious injuries, he decided to sign a waiver of prosecution and drop the case.

Moments after realizing she had just left her purse on the yellow lifeguard stand at the public beach, a woman looked back towards the stand to find two males walking away from it. Upon returning, she observed her purse was no longer on the railing. The purse contained her car keys, driver’s license, bankcard, $20 cash and her LG cell phone. The woman attempted to use the location service for her phone with negative results. The area was checked for stolen items and possible suspects, also with negative results.

County’s land development and zoning regulations to be updated and combined into single, user-friendly document