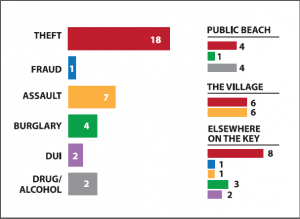 Below is a highlight covering some of the violations.

A Myakka teenager was charged with Possession of a Controlled Substance and Possession of Cannabis. An officer patrolling the Pavilion area noticed a group of 6-8 juveniles standing on the porch area of the County Lifeguard building. As he approached the group, he noticed two of the juveniles possibly attempting to quickly hide an unknown item. The group then left the area in order to avoid contact. The officer walked up behind the juvenile and observed a rolled marijuana cigarette behind the ear of the juvenile. After the officer conducted an investigation, verifying the illegal substance, he conducted a search of the teen, who admitted that he had Adderall in his possession packaged in small, plastic baggies. The teen stated that he was prescribed the medication and carried it in baggies, for convenience. The officer also found 2 small baggies of Marijuana and 2 marijuana cigarettes in his possession.

A man was found sitting in a rented car that had been reported stolen from a driveway earlier that day. When questioned, the man stated that he was given the vehicle by “a girl at the drum circle.” According to police, he had a small bottle of vodka in his pocket and had a very strong odor of alcohol coming from him. The man refused to enter the backseat of the patrol car and had to be physically pushed in. He later became combative and attempted to kick out the rear window out of the patrol car while screaming obscenities at the officer. He was charged with Grand Theft Motor Vehicle as well as Resisting An Officer w/o Violence.

A man was turning his car around in an empty parking lot when another man hit the vehicle with his hand. The victim exited his vehicle to ask the man “what are you hitting my truck for? I didn’t hit you or anything.” The man’s girlfriend then walked up and punched the victim on the face for no reason. The victim stated that the girlfriend continued toward him and that he grabbed her by the shoulders telling her that he did not want to fight anyone and to stop coming at him. The victim reported that the man came up behind him, grabbed him by the torso and pushed him into the window of the Ocean Blvd. business. The unknown male suspect and his girlfriend then fled on foot and were not able to be located.

A 14 ft. Hobie kayak was stolen between 9/6 and 9/9. The kayak was estimated to be valued at $3000. A maintenance person confronted an unknown male who had been on the property with his PT Cruiser, prior to the theft. During this time, The Sarasota County Sheriff’s Department was investigating, along with The Pinellas County Sheriff’s office, a burglary in Pinellas County in which six kayaks were stolen from a business and then offered for sale on Craig’s List in Sarasota.  Another incident was discovered in Lee County where eight kayaks were stolen and also listed for sale on Craig’s List Sarasota. This investigation eventually led to the man with the PT Cruiser who was positively identified as the man the maintenance person had confronted. He was charged with grand theft. It is believed the stolen kayak has been sold on Craig’s List.

Two young males were observed stealing cigars. The store clerk waved down an officer who attempted to find the juveniles in the direction that they were headed.  A chase ensued as one defendant tried to elude the officer. A bystander then tackled the defendant who dropped the 5 boxes of cigars. The teen struggled to flee again. When he did not comply with the officer’s command to get on the ground, the officer deployed his taser, striking the defendant. The defendant immediately fell to the ground. He was handcuffed and then jerked away again in an attempt to free himself. The officer was able to secure the suspect and place him under arrest for petit theft and resisting arrest w/o violence.

Lifeguards reported two lifeguard stands were broken into sometime after locking them up on 9/21/13. They discovered that an unknown suspect broke into the blue stand and stole an AED unit worth $4000. Also stolen, from the red stand, was an oxygen tank valued at $7500. Handprints were lifted from the scene. They were submitted for processing.

A man reported an unknown suspect stole a concrete pelican statue from the front of his home. The man had heard a noise during the night, but did not discover the statue was missing until breakfast time.