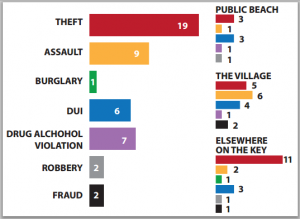 3/19/14 Battery 5000 Block Ocean Blvd
While on a routine foot patrol of Siesta Village, a sheriff observed multiple subjects leaving a nightclub in a hurry. One of the subjects advised he was in a physical altercation inside the bar and pointed to a male subject who was also involved in the physical alteration. The second subject was later identified as the defendant. The victim advised he was a t the club for a birthday gathering and was approached by the defendant in a threatening manner. The victim stated that the defendant took a pack of gum and his wallet from him. Once the items were retrieved back, the defendant punched the victim on the left side of his face with a closed fist. The defendant then ran out of the front door of the club. The defendant stated he had not punched the victim and was only speaking to a female who was in the company of the victim. He was charged with battery.

3/21/14 Grand Theft/ Felony 5200 Block Ocean Blvd
An employee of a village restaurant reported she had placed her purse under the counter when she arrived at work. When she was done with her shift, her purse was gone. The victim stated there was a disgruntled employee who was fired that day and had her purse next to the victim’s under the counter. The deputy was unable to contact the other employee.

4/2/14 Burglary 5000 Block Las Rosas
A couple reported a burglary at their residence. They explained that they had been receiving multiple calls from a Lakeland company in an effort to sell them solar panels. The man explained that he was fed up with the constant calls and asked a sales rep to respond to their residence.  On 4/2/14, a sales rep arrived at their home. The man asked the sales rep for a business card. He explained to the rep that he was not interested in his product but has a business card with a reference to call if he is further harassed. He then asked the sales rep to leave the premises. When instructed, the subject would not leave. The man called “911” in an attempt to have the subject removed from the property. While waiting for law enforcement, the homeowner walked into his garage while on the phone with dispatch. The sales rep unknowingly followed him into the garage and took the business card off his workbench. The man reported that he kept a firearm on the upper shelf of the workbench. The sales rep immediately turned and left the garage, got into his truck and left the area. Following the incident, the man left his residence and did not return for approximately 5 hours. During this time he was concerned that his firearm was in the garage and was unaware that it had been taken. When he returned home to find the gun had been taken, he searched the garage and his vehicles before calling dispatch again. Deputies were unable to lift any prints, but the victim was able to report the suspect’s tag number.

4/6/14 Theft 5200 Block Ocean Blvd
The bar manager of a village restaurant reported a man had ordered a total of $35.50 in food and drinks. The man provided a SunTrust card to them and the card was declined. The manager stated this was not the first time this has happened with this customer. The manager did not want to pursue charges of theft against the man and signed a waiver of prosecution. The manager did want the man to be given a trespass warning from the establishment for a year. The man understood that he was not allowed back on the property.

4/3/14 5000 Block Ocean Blvd Possession Of Cocaine
The manager of a village nightclub reported a disturbance. A man inside the bar had his pants below his buttocks. The manager asked the man to pull up his pants and leave the premises. The man became irate and threatened to “shoot up the place”. The manager requested the man to be trespassed from the establishment. A deputy approached the man to obtain his identity for the purpose of the trespass warning. When the man’s identity was entered into the NCIC system it was discovered that there was an active warrant out for his arrest. The man was placed under arrest, handcuffed and searched. During the search, the officer found a small plastic baggie in the front pocket of his jeans. The bag contained what appeared to the officer to be powder cocaine. The substance was tested on the scene and tested positive. The man was transported to jail without further incident.

4/3/14 5000 Block Midnight Pass Rd Battery
A woman reported she was at a village bar when she had a disagreement with her boyfriend. Her boyfriend left the area and she began walking home to the resort where she was staying. According to the officer she appeared slightly intoxicated but was able to clearly recall the incident. As the woman walked south on Ocean Blvd, a man, driving a 4 door white sedan taxi with an overhead light, stopped to offer her a ride. The man opened the passenger door and offered to take her home. The woman advised that she did not have any money but the suspect insisted that it was okay. When the car arrived at the woman’s destination and the woman attempted to get out of the taxi, the driver stated that she did not have to pay with money but would have to “repay” him. At that time the driver attempted to grab her in various inappropriate areas and tried to kiss her multiple times. She was able to pull away from the suspect and hide in a bush until she was approached by resort security. She then went to her room and called “911”. The woman advised she could identify the subject if she saw him again. There are no known suspects at this time.

4/12/14 Public Beach Grand Theft/ Felony
The Vice President of the company that supplied equipment for the Siesta Fiesta NCAA volleyball tournament at Siesta Beach reported a theft. Between 4/12-4/13/14 unknown suspects stole six tent frames and one set of volleyball court lines from the beach. A three part telescopic pole was completely destroyed.