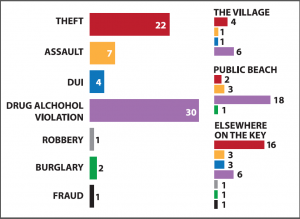 A woman called to report her bright blue Schwinn “Earth Cruiser” bicycle was taken from her garage. She stated that the garage door had been left open between 10a.m. and 1p.m. At 1:30p.m, the victim exited the garage in her vehicle and didn’t return home until 8:00 that night. She realized the bike was missing upon entering her garage and reported the crime. The woman was unaware if the bike had been taken before she left since she did not look for it at the time. She estimated the value of the bike to be approximately $300. There was another bicycle in the garage that was the same model within close proximity, but it was not taken. The victim didn’t notice anything else missing at the time of the report. There were no signs of forced entry and it is assumed that the bike was taken while the door was open.

A woman parked her bicycle, valued at $2195, in the rear of a village restaurant. When she returned a little over an hour later, it was gone. The bike was described as a dark purple Pedego electric beach cruiser. It had a black wire basket and bell attached to the handlebars. The key to activate the electric motor was left in the bike when it was parked.

Deputies received a call regarding a large gathering of underage drinking on the beach. Upon arrival, a deputy could smell the odor of marijuana and saw the defendant smoking something. When the deputy shined his flashlight on the defendant, he took off running. As the deputy was chasing him, he was seen throwing items out of his backpack. When the deputy caught up with the 18 year old, he apologized and said he had only had a couple of hits off of the marijuana and that it was not his. Deputies were unable to locate the items that had been thrown out of the backpack. When the deputies searched the defendant, he explained that he had forgotten that he had a bottle of Captain Morgan Spiced Rum in his backpack. When deputies checked his identification, the defendant admitted to having a fake identification in his wallet, as well.

A deputy was approached by a 16-year-old girl who complained that two of her friends took her car from the parking lot without her permission. She explained that she had given her friend the car keys so she could retrieve her phone from the locked vehicle. She stated she explicitly told the friend not to take her vehicle, as she was aware that she did not have driver’s license. After approximately 15 minutes, the complainant returned to where she had parked and discovered her vehicle gone. She was then unable to contact her friends by phone. While speaking with the complainant, Deputies witnessed the suspect driving the missing vehicle into the parking lot and conducted a traffic stop. The 15-year-old suspect acknowledged that she did not have a driver’s license and that she was not given authorization to take the vehicle. She explained that she drove the vehicle to the Subway in the Village in order to charge her phone. The complainant did not wish to pursue criminal charges and signed a waiver of prosecution. The suspect was issued two traffic citations. Her parents were contacted, responded to the scene and took her home.

A woman’s Mazda CX9 was stolen from the condo where she had been staying. She stated she saw her vehicle parked at approximately 3:45p.m. She left the condo at around 5 p.m. When she returned, she looked all around the parking lot and was unable to locate her vehicle.

The complainant had rented 8 bicycles from a Siesta bike rental business. The complainant’s children had been out riding the bikes when it began to rain. They put the bikes in the garage with the door left open. When the rain stopped, approximately 1 hour 30 minutes later, they discovered the bikes were missing. An unknown suspect had entered the garage and took three of the bicycles. The bikes were all reported to be Trek brand with an approximate value of $200 each. No paperwork was given at the time the bikes were rented, and as the complainant called to report the incident to the rental company, they stated they would follow up when possible. Due to the complainant renting 8 bikes from the rental company and the lack of any formal paperwork for the transaction, the exact model, color or serial number for the bikes was unknown at the time of the report.

A man reported that he had been landscaping his property and removed a metal flagpole from the ground. He placed it next to his detached garage and continued with his project. He left town for a couple of weeks and later returned. He then noticed that the pole was missing and assumed that scrappers had taken it. He stated that there are many suspicious people that use Access 1 and could see the pole from the beach. At the time of the report, there were no suspects and the exact date of the theft was unknown. The pole was valued at $350.

A lifeguard with The Sarasota County Emergency Services reported a burglary that had occurred in the middle of the night to the blue lifeguard stand. The door to enter the stand was damaged, having been either kicked from the inside or struck with an unknown object. The damage caused the wood to break in the center of the door, which caused approximately $200 in damage. Although no items had been noticed as missing, it appears that the suspect(s) entered through the side window due to the finger and hand smudges on it.

Beach Road plans to appear back before County Commission