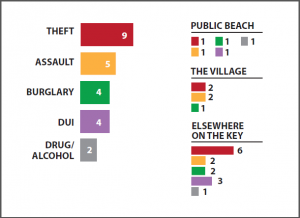 Below is a highlight covering some of the violations.

9/26  DUI  Siesta Public Beach
Officers observed a man arguing with his girlfriend in his car at the public beach. They saw the girlfriend yelling at the man who was seated in the driver’s seat of the car. As the woman opened the car door, officers noticed a large, empty bottle of vodka fall to the ground. The woman then struck the man in the head while continuing to yell at him. When officers approached the man, he was sitting in the drivers seat with the engine running, wearing only a pair of boxer shorts. He appeared dazed and officers could smell a very strong smell of alcohol on him. When asked to step out of the car to discus the potential battery that had occurred, the man stumbled out of the car, almost falling into the officer. After falling into the side of the car, the man had to lean on it in order to stand up. The man denied having “really anything” to drink. He refused to submit a breath test and became loud and obnoxious in booking, yelling that he would “go psycho” if he wasn’t released. He was arrested for DUI.

9/30  Burglary/ Felony  Siesta Beach
The owner of the Siesta Pavilion Concession reported that someone climbed to the roof of his business and stole 2 Bose speakers. They also attempted to break into the building and a coke machine.

10/2  Burglary/ Felony  Beach Road
A woman heard noises downstairs and called her father. When he arrived, he saw an unknown person walk past the French doors to the rear of the residence. When police arrived, they found no one in or around the house. However, a large Samsung TV was disconnected from the wall and found lying on a chair, 3 smaller TV.s and their remotes and wires from the upstairs bedrooms were all placed on one bed along with a decorative glass turtle. Another bed had a metal hermit crab on it and the last bed had a large wooden whale moved onto it.  Fingerprints were lifted from the scene. The woman later called police when she noticed that her Nikon camera and  telescopic lens were stolen from the property. Apparently, the thief had gained entry through a front window.

10/4  DUI  1100 Block Beach Road
A man on a motorcycle nearly crashed into a fire truck that was turning into the fire station. The engine driver heard tires braking behind him. As they turned, they saw the man staggering around his motorcycle, which was down on the road. The firemen brought the man in the station to treat him for a head injury, as well as scrapes and lacerations. When police arrived, they noticed the man’s slurred speech, bloodshot eyes and a strong scent of alcohol. He was unsteady and appeared intoxicated.  The man initially stated that he had not been drinking. At the jail, when asked if he would take a breath test, he stated, “of course I will, I’m drunk.” He then stated, “I’m gonna blow this thing off the wall, watch.”  While en route, he admitted, “You did the right thing,, I’m drunk.”

10/11  Burglary/ Felony  8600 Block Midnight Pass
A man reported that an unknown person broke into his condo and stole a window blind. Entry was gained through a bedroom window. The lower portion of the window was found below on the carpet. The missing blind is the blind for that window. The condo was vacant and void of any belongings during the time of the break in.

10/14  Theft/ Felony  7000 Block Point Of Rocks
A man returning home from a trip had to get the keys to unlock his front gate.  The keys were located in the house. He sat his bag and some groceries down at the gate, jumped over it, and ran inside the house for the keys. He was gone no longer than 5 minutes. When he returned to unlock the gate, he noticed that his groceries were still there but his bag, containing a laptop and reader, were gone.

10/17  Burglary/ Felony   5000 Block Calle Minorga
The Manager of an apartment complex reported a flat screen television stolen from a rental unit.  An unknown person appeared to have gained entry to the vacant apartment through an unlocked kitchen window.