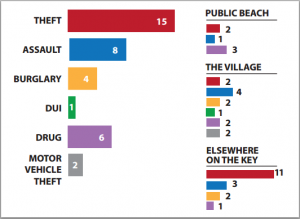 A deputy responded to a caller who reported 3 males and 1 female using drugs in a car in the rear of an apartment complex. Upon making contact with the car, the deputy could smell the strong odor of cannabis emanating from the interior of the vehicle. He also observed several open containers of alcohol in plain view. After asking the occupants to exit the vehicle, the deputy noticed a small baggy with a green substance in it in the center console. He also observed a purse on the floor containing two glass pipes and two baggies containing a white powder substance which, in a presumptive field test, tested positive for methamphetamines. The purse also contained an EBT card with the defendants name on it. The defendant stated she knew the purse was in her possession but that it was not actually her purse. She could not explain why her EBT card was in the purse.

A complainant reported that someone had taken their rented beach wheelchair from their condominium. The incident occurred sometime overnight possibly by local juveniles. The wheelchair, which had been rented from Siesta Key Bike and Kayak Rentals, was not locked or secured. There are no suspects at this time. The rental company charged the complainant for the cost of the wheelchair.

A deputy was in the beach office when he observed a man approach the victim at the entrance of the public beach parking lot. Using binoculars, the deputy observed the defendant walk up to the victim; exchange words, and then walk closer to the victim going “nose to nose”. The defendant then struck the victim in the face, which prompted the victim to strike back. The deputy came down to the scene and placed the defendant under arrest. The victim explained he was standing at the beach entrance, making a phone call when the man suddenly punched him in the face and threatened to kill him with “mob” friends after dark.

The defendant, who appeared to be very intoxicated, kept saying the victim was a predator and gave no justification for his actions. He was transported to jail and arrested for Battery on a person 65 years of age or older because the victim was 68 years old.

A woman reported that when she left her house in the morning, her jewelry box was located on top of a table in her living room, near the front of the residence. The box was visible from the rest of the room, including the lanai area. During the course of the day, her pool service came by the residence, leaving the service card on one of the sliding doors. At the end of the day when the woman returned home, she took the jewelry box into another room as she was preparing to get ready for another event. At this time she noticed several items missing from the box. The point of entry was possibly the rear slider, which was left unlocked.. There were no signs of forced entry and no other items appear to have been disturbed. This case could possibly be related to another case which occurred a short distance down the road. In that incident, two subjects were attempting to possibly burglarize a residence on Shadow Lawn Drive, by going in through the backdoor.

The Sarasota County Sheriff’s Office arrested a local chiropractor on 4/28/14 for throwing urine on a code enforcement officer. The suspect owns a Siesta Key rental property that has been the subject of an ongoing rental scam investigation.

Multiple people reported paying Craig Siegel, operator of Siesta Resorts LLC and Siesta Vacations Inc., to rent a 12-bedroom home in the 6500 block of Sabal Drive. Siegel modified the structure in 2013 but did so without the proper permits, so Sarasota County Code Enforcement ordered him to dismantle the lower level new construction. The home has just five bedrooms, but Siegel still advertises it as a 12-bedroom property.

Detectives identified 19 victims nationwide who paid Siegel more than $53,000 to rent the 12-bedroom home and asked for refunds after learning the property was not what he portrayed. They were either forced to stay at the property without adequate accommodations, or sacrificed the money they spent and had to pay to stay elsewhere.

Siegel told the victims to sue him, claiming he did not have money to return. However, detectives obtained financial records showing Siegel paid $172,500 to a Fidelity Investment Plan last year. Detectives identified additional victims who did not want to be part of the criminal investigation, fearing they would lose money already paid to Siegel.

When a code inspector with whom Siegel has had frequent dealings arrived at Siegel’s Sandy Cove Avenue home on official county business, Siegel threw a bucket of urine on the man.

Siegel is charged with Criminal Mischief and Battery on a Code Inspector in connection with the incident. In the rental scam he is charged with 19 counts of Scheme to Defraud, for which he is being held $55,000 bond.