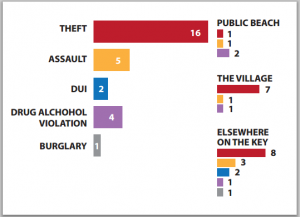 4/17/15 Theft –Vehicle
6300 Block Midnight Pass Rd.
Two men reported they had gone golfing on 4/16 and had put their clubs away in their rental vehicle. After traveling to various places in Sarasota, they realized that at some point that day, their clubs had been taken out of the car. They believed they were taken by opening the rear tailgate of the vehicle. The first victim stated his clubs were a set of Pings in a blue “Titleist” bag and had an estimated value of $1600. The second victim stated that his clubs were a set of Pings in a black “HP” bag also valued at $1600. At this time there are no suspects.

4/19/15 Theft-Vehicle
1000 Block Crescent St.
A man ‘s car was burglarized and he was unsure of exactly when his items were stolen. An unknown person entered his unlocked vehicle and took a 45 caliber Glock semi automatic handgun and his wallet from the center console. The vehicle was parked outside of his duplex. He did not discover the theft until he went to the store and looked for his wallet. There was no evidence of forced entry.

4/29/15 Battery
700 Block Siesta Key Circle
A woman reported that she was the victim of a battery. She explained that she was in the process of moving out of her rental and that the landlord had hired a man to power wash the residence. While she was moving things in and out of the residence, she was getting sprayed with residual water from the power wash. She stated that she tried to get the attention of the man on the roof, but due to the noise of the machine, he was unable to hear her. She then turned off the water supply to get his attention. The man told her to turn the water back on as the lack of water would damage his machine. The woman said she turned the water back on but turned it off again after he continued to power wash. She then refused to turn it back on. According to the woman, she was holding the faucet in the off position when the man grabbed her by the arm and shoved her. She said she received a cut to her hand, which according to the officer, was not very visible and was unable to be photographed. The man agreed with most of her version of the incident, except he said he never shoved her. He stated he was attempting to turn the water back on as she was holding the faucet off and could have touched her hand while doing so. The woman wished to prosecute and was given a Sherriff’s Office case card. The officer explained to both parties that based on his investigation and the fact that there were no witnesses of the event, he had determined that there was no probable cause for an arrest and there would be no further action on the case.

5/3/15 Theft -Residence
4000 Block Ocean Blvd.
A couple called the Sherriff’s Department to report that their home had been burglarized. The woman stated that she went to her closet jewelry drawer to pack some items for a business trip when she discovered that several jewelry items were missing. The 4 pieces were valued at a total of $46,988. The woman then went to another location in her kitchen where she had stored more of her jewelry and discovered that it was also missing. Those items were valued at $18,463. The couple stated that several subjects had been in and out of their residence to clean, etc. One particular subject stood out to her. It was a cable repairperson that had been at their house for an entire day, throughout the house, unsupervised. The woman felt that this person acted in a suspicious manner and took longer than usual. The officer noted that the couple stated that they leave all doors to the residence unlocked except for the front door. There were no signs of forced entry. Forensics was able to dust the house for prints.

5/10/15 Petit Theft
6400 Block Midnight Pass Rd.
A man reported his bicycle was stolen. He stated he left it unlocked against a wooden sign at Crescent Beach. He stated the bike was left there for approximately 45 minutes and was gone when he returned. There are no suspects or witnesses at this time.

5/10/15 Petit Theft
Public Beach
A man entered the North front desk to report his wallet had been stolen. He stated that an unknown person(s) entered his beach bag while he was at the concession stand. The stolen items included a wallet, driver’s license, glasses and some cash.

5/13/15 Theft- Vehicle
200 Beach Rd.
A man reported that an unknown subject had smashed his passenger side window and stole his wallet. The man had left his car for approximately 2 hours while he went to the beach. His wallet had been left next to the center console under a towel. When he returned to the car he found the window completely shattered. It did not appear anything else was rummaged through or taken. Inside his wallet were his driver’s license and multiple credit cards. The responding officer was able to lift some prints off the door handle. There were no known witnesses.

5/17/15 Grand Theft
1200 Block Old Stickney Pt. Rd.
A man left his tandem motorized bicycle at a marina for a couple of days and found it stolen when he returned. The victim stated the bike did not have a chain lock on it but advised the rear wheel was locked. He said the black bike was very heavy due to the battery and motor. He said he had paid $3000 for it.

Stolen bicycles recovered at a cost