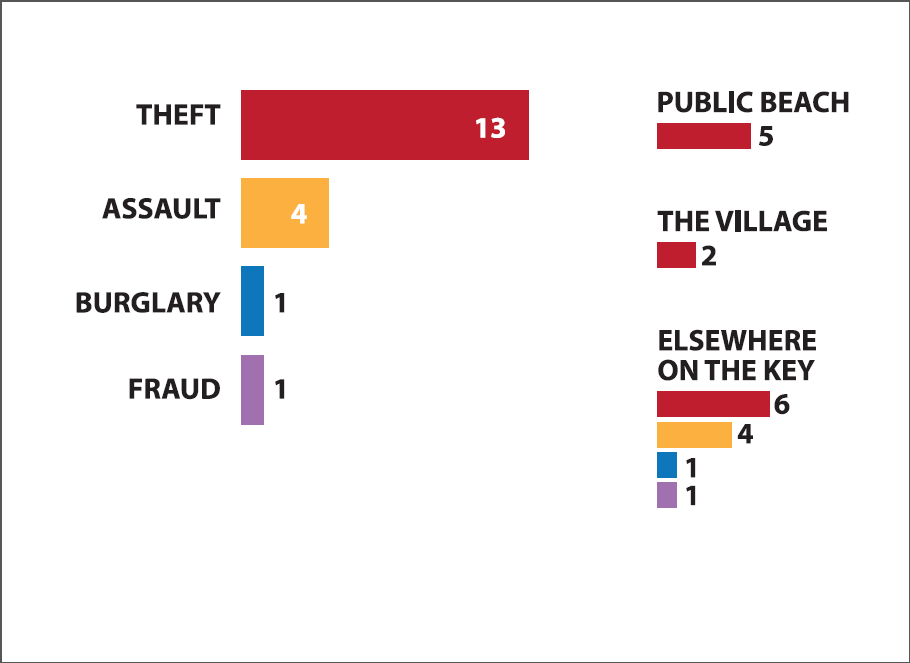 4/20/16 Burglary-Vehicle
A woman reported her car had been burglarized while it was parked at the public beach a few weeks prior. Her purse had been stolen from under the seat of her unlocked Jeep. The $100 leather purse contained $200 in cash, a $150 Wallet, student ID and prescription drugs including Prozac and birth control pills.

4/22/16 Battery- Injuries
1200 Block Old Stickney Pt. Rd.
Officers were dispatched in reference to a battery. They made contact with the suspect, who stated an unknown male had hit him in the face and he did not remember much about the incident. He believed the victim might have said something rude to him. The victim stated he was standing in front of the bar stage where a female relative was dancing when the suspect grabbed him and told him to get away from her. The victim stated that when he turned around to explain that he was related to the girl, the suspect began throwing punches at him. The victim attempted to defend himself and struck the suspect in the face with his elbow. Security footage showed the suspect as the primary aggressor, hitting the victim without any warning, and the victim defending himself. The victim did not wish to press charges and the men separated for the night after shaking hands and apologizing to each other.

4/25/16 Assault
6000 Block Midnight Pass Rd.
An employee of a landscape company pressed charges of assault against his co-worker. The men had had a falling out after the victim had lived with the defendant for a short time. According to the victim, his co-worker has continually harassed him by enticing him to fight.  The victim is on supervised release and made it clear to the defendant that he wanted no part in any physical altercation, as it was one of the terms of his release. On this day, the defendant sought out the victim and started an argument over ongoing issues. He then took a swing at the victim, who first responded with a swing back, but then left the area in order to avoid a fight. The co-worker snuck up on the victim from behind a building and took another swing grazing the victim’s mouth. The victim walked away and called 911. The defendant initially denied knowledge of an altercation but then left the area without providing a rebuttal.

4/25/16 Burglary- Vehicle
4000 Block Ocean Blvd.
A man reported his 40-caliber pistol was stolen from inside his car while it was parked in front of his condo building. The pistol, a black Heckler & Koch USP, was valued at $700. No forced entry was observed on the vehicle and the man was unsure if he had locked the doors prior to the theft. There were two cameras in the parking lot; however, the victim’s car was parked between the viewing angles.

4/25/16 Burglary Vehicle
100 Block Pass Key Rd.
Officers contacted a man to ask if he had recently been a victim of theft. He acknowledged that he had a few days before. He stated that he had not reported it, as it was just a wallet and some ID cards. He said the wallet, “Tumi” brand worth $100, was the only item of value taken. An officer explained that his wallet had been found with a man who was arrested who also carried a stolen Heckler & Koch pistol.

That pistol was stolen from the car in the Ocean Blvd. Burglary.

4/29/16 Burglary-Vehicle
Public Beach
A man parked his car in the public lot at noon. Upon returning 6 hours later, he found his wallet, containing a driver’s license and 2 credit cards, and an LG pad valued at $200, had been stolen. There were no signs of forced entry to the vehicle and no suspects.

5/1/16 Theft
Beach Rd.
A man reported that his daughter’s skateboard was stolen from Access 2 while she was in the water. A witness stated she saw approximately three male juveniles near some bushes at the access messing around with several skateboards. She said she overheard the boys talk about taking “the most expensive” looking one. She stated she saw the suspects leave the area and head towards the Village with a skateboard matching the description of the victim’s. She was able to take cell phone footage of two of the suspects but was unable to capture footage of the boy who left with the skateboard. The board was a “CaliFlorida “ brand, long board style, valued at $280.

5/7/16 DUI. Resisting w/out Violence, No valid Driver’s License,
Grand Theft Auto, Burglary of an Unoccupied Conveyance
4800 Block Ocean Blvd.
A deputy was in his patrol car stationary on a median at US41/Hansen St. when a truck sped by at a high rate of speed. He followed the truck and noticed the driver was having a hard time operating the manual transmission, as the truck was bucking wildly. The deputy activated his emergency lights and the truck sped up. As the defendant turned into the Olive Garden parking lot, he pulled into a parking space and drove over the curb, which caused the truck to roll backwards towards the police car. The defendant jumped out of the car and ran away. He was subsequently caught and put in handcuffs. As the deputy tackled the defendant, he noticed the strong and obvious odor of alcohol on the man’s breath. After investigation, the driver was arrested for DUI. A computer check revealed that the defendant had no Florida Driver’s license, having only been issued a Florida ID card. It was also determined that he had just stolen the car from a residence on Siesta. The deputy made contact with the owner of the vehicle who confirmed that he did not know the man and that he did not have permission to operate the vehicle. The vehicle was released back to the victim and the defendant was transported to jail.