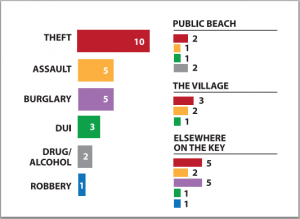 A man reported he was walking from the beach to the parking lot when he witnessed a man and a woman rough- housing. He then saw the woman scream and saw the man choking her and pushing her head against the sand and calling her derogatory names multiple times. According to the witness, the man then got up and started kicking the woman in the head before he put on his backpack and attempted to leave. When a deputy arrived the woman had fresh bruises on her body and sand covering her face. The victim stated that they were only playing around but seemed very nervous around the defendant. After talking with the victim, who told of the man waking her out of her sleep that night by choking her until she lost her breath, the defendant was read his Miranda rights and taken into custody. The defendant did not wish to talk to the deputy about the incident. He and the victim have been in a relationship for 6 years.

While on routine patrol observing traffic flow at the main entrance to the public beach, a deputy observed a man pull into the parking lot without wearing a seatbelt. He activated the emergency equipment on his ATV and conducted a traffic stop in the parking lot. As the deputy approached the vehicle he noticed all four windows were rolled down which allowed a clear line of sight into the vehicle. As the deputy began speaking to the driver (defendant), he could smell a strong odor of freshly burnt marijuana emanating from the vehicle. He asked the driver if he had any drugs inside the car and he stated, “I just smoked a roach”. He then asked the driver if he had any contraband in the car and he stated, ”Yeah, just a little bit of my joint left over”. He the handed the deputy a bag containing a small baggy of a green leafy substance and a brown rolled up cigar containing that same leafy substance. Based on his training and experience, the deputy was able to identify the substance as marijuana. The total amount of marijuana was less than 1 gram. The deputy advised the driver that he would be charged with possession of marijuana under 20 grams for actually being in possession of the drug inside his vehicle. The driver was the only occupant of the car at the time.

A woman called the Sheriff’s Office to report a possible burglary to her residence. The woman stated she returned home from The Village at about 2100 hours on 5/25 and went to bed at her residence. She woke up the next morning and discovered someone had gained access to her backyard and used her hot tub and knocked over some plants. She stated that her gate had been double latched but that it was open on this morning. In the backyard, the cover to the hot tub was removed and laying on the ground and one of her shoes was soaked near the hot tub. There were also several plants knocked over. There are stairs to the complainants bedroom in the back of the residence and it was evident that someone had been up there as well because more plants were knocked down and items were moved around from their original position. The front of the residence is only accessible from inside the residence, but all the chairs were moved to a corner of the porch. The woman’s recycling bins were also strewn about her front yard. Her neighbors did not see or hear anything during the night.

A man flagged down a deputy in reference to a petit theft. The victim stated that the suspect, a homeless woman, stole his Trek bicycle from the front of his residence. The victim’s neighbor witnessed the suspect taking the bicycle from the victim’s residence. The neighbor contacted the victim as soon as he realized what the suspect was doing. The victim was able to ride his other bicycle after the suspect and caught her at Beach Rd & Ocean Blvd. The victim took back his bike and was on the phone with dispatch when he flagged down the deputy. After getting his bike back, the victim decided to sign a waiver of prosecution and was advised he had up to a year to change his mind.

A man telephoned The Sheriff’s office to report a theft. An unknown suspect cut the locking chain and stole a dark blue 3G Newport Gents bicycle valued at $469.00, from an insecure location on Midnight Cove Rd. The bike was chained to a second bicycle, which was left behind by the suspect and is owned by Siesta Key Bike and Kayak.

A man reported that he was hosting an open house on Calle De Peru and was attempting to pick up his realtor signs. A coworker drove by and honked his horn at him. As the man entered his vehicle he heard the defendant yell to him. The man figured he had a question about the open house and exited his vehicle. The defendant then approached the man in an aggressive manner with a power drill in his hand. The defendant began to scream and yell at the man about honking a horn on his street. The defendant continued to approach him while holding the power drill and putting his hand on the man’s chest. The man then grabbed the defendant’s hand and pushed him away causing the drill to fall to the ground. The defendant left and the man called 911. When questioned by deputies, the defendant stated that he was in his house when he heard honking car horns, which disturbed his pets. He stated that nothing physical had happened he had only yelled at the man while holding a power drill. A witness of the incident agreed with the victim. The defendant was arrested for battery.

The Sarasota County Sheriff’s Office has reviewed crime data for a special directed patrol initiative on Siesta Key throughout March and April and found it resulted in a much safer Spring Break for residents and visitors.

In effect, saturating the popular beaches and village areas over the eight week period with a uniformed law enforcement presence was a crime deterrent overall. The findings included:

▪   The next most-prevalent charge was for narcotics

▪   The most serious charges were against local residents, not visitors

▪   Most charges were for incidents at the main beach itself, not in the village.

On Siesta Key, there was only one more crime reported during March and April 2014 compared to the same period in 2013. However, the number of charges increased significantly (42%) due to the agency’s proactive patrolling effort.

“More people in one place increases the potential for incidents to occur,” said Sheriff Tom Knight. “By committing additional resources to one of the top destinations for citizens and visitors alike, we clearly establish that misconduct will not be tolerated.”