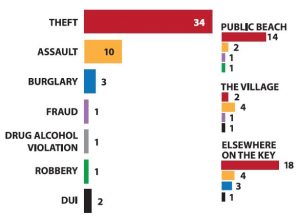 A woman was sitting at a table under the old pavilion when a white male wearing a red shirt over his face ran by and took her purse off the table. The male ran to a four door white sedan that was being driven by a heavy set Hispanic male. The woman’s purse contained her passport, debit card, driver’s license, a men’s wedding ring ($200), a woman’s wedding ring ($1000) and $400 worth of other jewelry. The woman’s passport, license and debit card were later recovered on the side of the roadway in the 5700 block of Midnight Pass. These were checked for fingerprints with negative results.

A man who had dined at a Village nightclub reported his motorcycle stolen after he left it in a parking space in front of the club. The man stated that after he had eaten, he decided to leave the bike in the parking lot while he left the bar for a couple of hours. When he returned, it was gone. The man contacted the club and the towing company responsible for the lot. Neither had towed his bike. There are no liens on the bike and it was not impounded. The bike was a Suzuki, valued at $2000.

A woman was arrested for battery after a domestic argument turned physical.  The couple had been in an arguing match over whether they would stay at the mall or go to the beach. According to the victim, during the argument the woman started pushing the victim. She then grabbed his arm and scratched him. He stated that the defendant does have a temper but he did not wish for anything to be done about it even though he had sustained bruising and scratch marks on his bicep and forearm. The defendant stated that the victim had grabbed her hair and she had tried to push him away. It was after this that they separated and called the Sheriff’s Office. The victim had no signs of injury on her person. She was placed under arrest and transported to jail without incident and was very cooperative.

A woman reported that sometime between 6/18/16 and 6/20/16, an unknown suspect entered her home and stole a digital camera off her desk. She reported no other items appeared to have been stolen. Her home was unlocked and there was no forced entry. She stated that during the same timeframe, she believes the same unknown subject(s) cut and damaged the rear bumper and rear corner panel of her 1989 Winnebago. That damage was estimated at $430.

A man who left his beach bag unattended for approximately one hour while swimming, returned to find the bag stolen. The bag contained his car keys, house keys and cellphone. There were large crowds in the area. However, no witnesses or suspect descriptions could be obtained.

An employee of a transportation company hired to move a boat reported the boat ($20,000) and the trailer ($20,000) stolen. The driver reported he had arrived and parked the boat across from the marina and double locked the 27” Grady White Sailfish in order to attend another appointment. When he returned, the boat and trailer were gone. Upon review of footage obtained from two nearby businesses, a large white truck with gold trim was seen going up and down the street that resembled a truck that had recently been stolen from a residential area just over the south bridge. The BOLO was updated to reflect the stolen boat/ trailer was possibly being towed by the stolen Ford F250 truck and could possibly have a stolen tag affixed that has not yet been reported missing.

A couple parked their car at Access 5, put their personal belongings into their beach bags and walked out to the beach. After leaving their bags unattended, they were stolen. The bags contained two sets of car keys and two cell phones. When the couple returned to their car, they discovered an unknown suspect had entered their vehicle and stolen a bottle of prescription drugs and a written prescription from the center console. The suspect left the car unlocked and left the area. There were no witnesses, however 2 sets of fingerprints were obtained from the driver’s door.

A woman reported her purse stolen from a restaurant where she was socializing with friends. The victim works at the club next door and came over after her shift ended. She noted that she left her purse on a chair in the bar area when she went to dance and to use the restroom. The purse was gone upon her return. The purse contained her iPhone6, license and insurance card. The woman noted that she keeps her cash and credit cards separate from the purse.