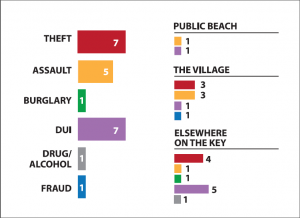 Below is a highlight covering some of the violations

10/28/13    DUI /Drug Violation      Beach Road & Ocean Blvd
A 40 year old man was charged with DUI with property damage and possession of a controlled substance without a prescription after he crashed into a Siesta Key Village sign, a large palm tree and ran over some nearby shrubbery.  The defendant stated he was coming from Turtle Beach where he drank two beers. He was unable to tell the officer what kind of beers they were. The man complained that he had hit his head but refused an ambulance. After the arrest, the officer conducted a search of the defendant and found a small baggie containing controlled substances in his front left pocket. The man denied any knowledge of them. He claimed he had been traveling with a bunch of people but did not know where they were.

11/10/13  Felony/ Burglary    6000 Block Midnight Pass Rd
A man reported someone had illegally entered his unit and stole several items. He had first noticed an envelope of cash missing from a drawer about 10 days prior to this incident. At that time, he had assumed he had misplaced the money. However now he realized there was also jewelry missing from the same dresser. He stated that his doors are always locked. No signs of forced entry were observed. Another burglary was reported in a nearby unit a few months prior.

11/10/13  Misdemeanor/ Assault Battery   Siesta Beach
An officer on foot patrol was informed of a fight near the volleyball courts. When he arrived, he noticed five male subjects with unknown identities fighting with the victim. As soon as they saw the officer, the males ran through the trees and were unable to be located. The victim had minor lacerations to his nose. He advised that he had been leaving the pavilion area when he was “jumped” by the unknown individuals. The victim, who admitted he had been drinking, refused any medical attention. He was unable to give an accurate description of the subjects. He told the officer he was done with this and just wanted to leave.

11/14/13 Misdemeanor/ Assault  100 Block Whispering Sands Drive
A wedding rehearsal party was the incident location for a reported assault. Police had responded earlier to this location regarding a noise complaint. The complainant on that case is the suspect for this incident. The bride to be called police to report that a woman carrying a flashlight (the suspect) came from her residence through the trees and walked into the middle of the party. She became upset about the loud music because of her 16 month old sleeping child at home. The suspect began screaming and threatening to “kill” everyone. She also began to throw her closed fists at the victim, who felt that she was in immediate danger. The suspect then left the area and returned home. According to police the victim appeared to be very intoxicated and admitted she had had a substantial amount of alcohol. When officers made contact with the suspect, she appeared very subdued and was surprised by the accusations against her. She admitted to going to the party with the flashlight, but said she only raised her voice and did not swing at anyone. During questioning, the suspect fainted and her husband caught her to keep her from hitting her head on the front walkway. Rescue was called and cleared the suspect of any medical issues. The suspect stated she has suffered for over 1 year from sleep deprivation due to her child’s sleeping habits. The child had just recently adapted a new schedule and the suspect was concerned that the child’s sleep would be interrupted. Noise meter readings were taken from the party. The suspect and her husband were informed that no noise ordinance violation had occurred. The suspect was vey apologetic for her actions and stressed that she was unaware of what she did. Officers returned to the party and spoke with the victim’s fiancée who stated that the victim was in no condition to discuss this any further. They advised that the victim could contact the sheriff’s office when she is able if she intended to proceed with the assault charges. There were other witnesses to the incident at the party but the victim did not wish to involve them at this time due to the occasion.

Man Calls 911 Because Neighbors Wouldn't Drink With Him
James Collins just wanted to have a drink with his neighbors, but when they declined to imbibe with him, he took matters into his own hands.
Collins, 56, called 911 on Nov. 3 and reported his neighbors' rude behavior to the cops, according to Dumb As A Blog.

Officers from the Fort Pierce, Florida police department thought they were responding to a domestic disturbance call.

Instead, Collins — who was celebrating his birthday — just told them his neighbors were being mean and would not drink with him, according to a report obtained by TCPalm.com.

An officer explained to Collins about misusing 911, but he apparently didn't get the message.

He called 30 minutes later to once again complain about his neighbors not drinking with him.

This time, when the cops arrived, they noticed he smelled of booze and had a container of "Blue Ice" in his front shirt pocket.

Collins was arrested on charges of disorderly intoxication and misuse of 911, UPI.com reported.

News Up and Down the Trail