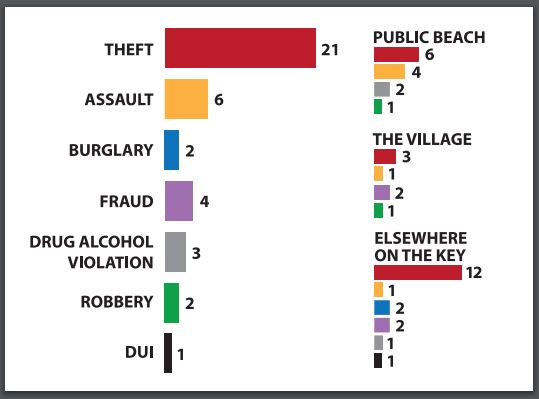 6/21/16
Theft
Public Beach
A man reported that his wallet was stolen after he left it inside his shoes while he took a swim. The wallet contained $100 and various ID cards.

A man and a woman traveling on a motorcycle approached an officer to explain that they had just been robbed. He stated that he and his female passenger were walking on the beach together when they came across a group of unknown subjects. As the couple attempted to leave the area, the subjects approached them and struck the man in the face. The man explained that as he was fighting off two of the subjects, another one grabbed the female by the throat and threw her to the ground. The man offered his wallet to the subjects and said they could have it if they would just leave him alone. The subjects took the wallet and left the area on foot. The man refused to wait for rescue to arrive to check his face for injuries. He insisted on driving himself to the hospital where he discovered he would need surgery to fix a broken jaw. Detectives responded to the hospital to take over the investigation. The wallet contained various cards and $2500 cash.

Upon reviewing her credit report, a woman discovered someone had used her social security number and other personal information to rent an apartment in Manatee County. The crime was committed over the phone or online. The woman spoke with the apartment manager who explained that the apartment was rented to a woman who co-signed with the complainant’s stolen information. The case will be further investigated.

The manager of a Village restaurant reported two older customers had left without paying their bill. The diners had eaten $44.60 worth of food before leaving. A waitress was able to get their tag number and car description. The manager advised the restaurant has no security cameras.

A woman reported someone had broken into her Aunt’s condo. She was contacted by management after two other residents reported witnessing two white male juveniles enter the condo. The women saw the suspects walk through the pool area up to the condo in question. One of them attempted to open the door while the other removed a window screen. Both suspects entered through the window and left about five minutes later with nothing in hand except for a bag of beef jerky. No fingerprints were available on the screen window.

A woman walking out of her bathroom saw an unknown male suspect coming out of her upstairs storage closet. The victim ran out of her house and headed to a neighbor’s house. The suspect had apparently gone through the downstairs pantry prior to going upstairs to take two bottles of liquor. He left the liquor behind as he slowly exited the home behind the victim and ran north on Point Of Rocks Rd. The home had been unlocked as the woman was home and saw no need to lock the door. A search of the property yielded no results. The woman’s property does not have security cameras, although her neighbors possibly had footage. No witnesses have been located or identified as of yet.

A couple attending a house party returned to their car and found a window smashed. The woman’s purse was also stolen. The purse contained two credit cards, checkbook, $20 cash and two wallets, one valued at $150, another valued at $200.

A man reported his motor scooter was stolen from the parking lot behind a Village restaurant. The man explained before calling the sheriff’s department, he had contacted the towing company in charge of the lot and they advised they did not tow the vehicle. The man stated he had no liens or holds on the vehicle. A BOLO was issued for the tan Vespa scooter worth approximately $4000. The man stated he had left the scooter in the lot overnight because he had too much to drink. There were no witnesses or suspect information.