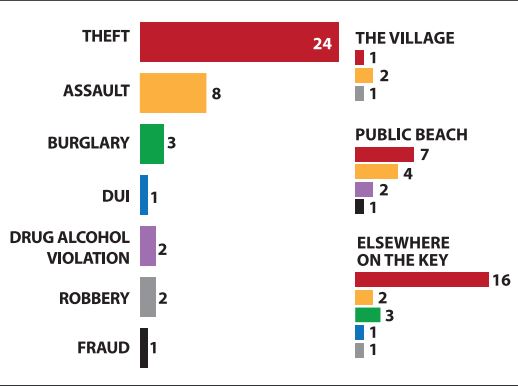 A man visiting the Key with his parents went into the Village after eating dinner with them. He visited several bars and had several alcoholic drinks throughout the night. After closing time, he met up with a group of subjects he had talked with earlier. When he mentioned that he would be going home, the group offered him a ride. The victim accepted the ride and got into their vehicle. He says from that point on, he doesn’t remember anything very clearly. Approximately 3 ½ hours later he woke up in an unknown place and walked to a WaWa gas station at 301 and Myrtle with injuries to his face, and several personal items missing. He believes he was punched in the head at some point, but was unable to provide any information on where it would have occurred, when it occurred or any suspect description. The victim was missing his wallet and its contents, $200 cash and $550 in jewelry he had been wearing. He had obvious bruising on his face. The subjects who gave him a ride were described as three white males, approximately 20-30 years old. One was wearing a hat. No other information was available.

An unknown suspect entered a man’s boat and removed $400 worth of seat covers. A zipper to the canvas top was also damaged as if the suspects were trying to remove it as well. The man did not report the incident right away and took his boat out on the water. The boat was unable to be processed for prints due to contamination of evidence by the owner and his passengers. The victim reported the theft to the dock master where his boat is kept.

A cell phone theft was captured on video at a Siesta condominium. In the video, the victim is seen leaving her iPhone 6SE on the hockey table. Two females in their twenties are seen observing the phone and the security cameras. They both stand in front of the phone and place a bag on it. They then pick up the bag and walk away with two white males. The phone is no longer visible. They all leave the clubhouse and walk to villa 27. The phone was not observed missing until after the suspects had checked out of the condo and left the premises.

A young man reported that when he returned to his chair after swimming in the water, he noticed the zippers on his backpack open and his iPhone5s missing. He did not see anyone take his phone but was able to track it on his find my iPhone app. The first search showed the phone to be off so no signal was available. When he checked the next day, the signal was on and showing somewhere in Orlando.

An unknown suspect removed two bicycles from the bike rack at a Siesta condominium. The bikes were not locked but the lock was threaded through the rear wheels. Video cameras face this area but were unavailable at the time of the report due to the office being closed for Independence Day. A message was left at the office in reference to the video. The bikes were valued at $900.

Two juveniles were robbed and beaten after attempting to purchase marijuana from someone they had met at the beach earlier in the day. According to the victims, they were approached by the suspects in front of the public beach. The suspects had asked if they would be interested in purchasing marijuana. The victims exchanged Snapchat information with one of the suspects. Later that night when they attempted to buy the marijuana from the suspects they were jumped and robbed of $150 in cash. The victims did not know the name of the suspects and were unable to retrieve any Snapchat info since it had been blocked. They were described as three to four black males all in their twenties. There did not appear to be any cameras on the property, which would have captured the event.

A deputy observed multiple people arguing near the sun deck. He approached the subjects and was informed by the victim that the suspect had struck him in the face with a closed fist. The victim said the attack was completely unprovoked. The suspect stated he hit the victim because he was “grinding” on some women who were with the suspect. The victim did not appear to be injured and did not wish to be treated. He did not wish to pursue charges and signed a waiver of prosecution. Both parties were intoxicated and left the area with other friends without further incident.

A man reported his Honda CRV and Honda Pilot were burglarized while they were parked in his driveway. Both cars had been left unlocked and were rummaged through. A wallet, various credit cards and $110 was taken from the Pilot.

Mike Granthon and The Beach Club