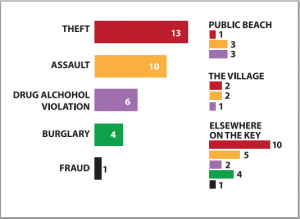 7/27/15 Theft
700 Block Beach Rd.
A man reported a stolen bicycle. He advised he was staying in a vacation rental and left his bike unlocked in a bike rack on Beach Rd before walking down to the beach. He returned to the bike rack approximately one hour later and the bike was gone. The bike was a Huffy Cranbrook model, neon green in color with white fenders and white walled tires. It was valued at $250.

7/27/15 Burglary of an Unoccupied Dwelling
6000 Block Midnight Pass Rd.
A 41-year-old Virginia man was arrested for burglarizing a condominium. The victim reported that while they were at the beach, someone had entered the condominium that he and his family were renting and stole approximately $2700 in cash, 2 credit cards and a NY driver’s license. There were no signs of forced entry and the suspect left behind a fold up canopy in a box and a pair of Panama Jack sunglasses. The apartment complex has video surveillance cameras. They provided the Sheriff’s office with footage of a man entering the apartment with the canopy and wearing sunglasses and leaving approximately on hour later without either item. Management was able to provide the name of the defendant, who was also renting a unit at the complex. The man’s wife was contacted and she confirmed that her husband was supposed to bring the canopy from the car, but when she questioned him about it, he didn’t know where it was. When shown a picture of the forgotten sunglasses she said they appeared to be her husband’s. Deputies found the suspect still in his car and placed him under arrest. During this time the defendant took a black pouch off his belt and placed it between the front seats. The pouch was immediately seized and searched. The pouch contained 10-new $100 bills, 2 credit cards and a NY license, all of which belonged to the victim.

7/31/15 Battery
6000 Block Midnight Pass
Officers made contact with a man who explained that he was intoxicated and had an argument with his girlfriend on the beach. He advised that a group of unknown subjects approached him stating that they didn’t like the way he was treating his girlfriend, one of the suspects then punched him in the face and fled the scene. This unknown subject was described as a white man in his twenties with blond hair and wearing a tank top. The subject had blood on his face and shirt and was complaining of a broken nose. The girlfriend of the subject corroborated his story. The subject was taken to Sarasota Memorial without incident.

8/1/15 Grand Theft
100 Block Avenida Veneccia
A man called to report that an unknown person had removed the rear tailgate from his 2014 Chevy truck while it was parked at his residence during the night. The unknown suspects apparently slid the tailgate out after cutting the supporting wires. The complainant advised he had heard this was becoming a popular theft as thieves are targeting the back up camera.

8/9/15 Battery
Public Beach
A 16-year-old male reported a battery that had occurred the night before. He explained that he was at the drum circle with friends and was punched in the face, blacked out and woke up in his friend’s mom’s car on the way to the hospital. He did not remember anything else about the incident. His friend, however, saw the battery and the suspect. The victim provided the witnesses contact information and hospital records that indicated the victim had sustained a concussion and a facial fracture. An officer contacted the witness who stated that the victim threw a glass bottle and it landed near the suspect. She explained that the suspect became furious and punched the victim in the face twice and punched him once in the chest. According to the witness, the suspect then picked up the victim, placed him near his friends, and left the scene. She stated that they called a parent to come get them and drive them to the hospital. The witness described the suspect as white male, bald, 25-28 years old, 5’7-5’9 tall muscular build. Neither victim nor witness knew the suspect by name.

8/10/15 Burglary
500 Block Beach Rd.
A surfboard, valued at $500, was stolen from a man’s backyard. It was unsecured and unattended at the time. The backyard can be accessed either through the beach or the front of the house. There were no witnesses or suspects.

8/10/15 Battery
8000 Block Midnight Pass Rd.
A deputy responded to a man who reported that his wife was in a physical altercation with another woman. The man explained that he and his wife, the defendant and her husband were all homeless and living in a tent at the campground. The defendant had accused the man’s wife of doing drugs and the two became involved in an argument. The victim claimed the defendant would not let her into the tent and then attacked her in the head with her hands when she came back in. The deputy noted the victim had a small scratch under her eye and a cut on her hand. Her clothes were torn and she had a small knot on her forehead. The victim refused medical treatment and wanted to press charges against the woman for battery. The defendant and her husband had left the scene prior to the deputy’s arrival. A short while later, the defendant called the sheriff’s department again to report that the defendant had returned to the tent and attacked the woman for a second time. The deputy returned to the scene and noted another knot on the victim’s forehead. When the defendant admitted to the battery, she was placed under arrest and brought to the county jail.

8/12/15 Grand Theft
300 Block Avenida Paradisio
A woman called on behalf of her brother, who is currently incarcerated, to report a theft that had occurred between 7/31/15 & 8/1/15. While her brother’s 2011 Ford pick-up was parked, reverse in, on the driveway, an unknown person stole the tailgate from the truck. It was valued at $716.55