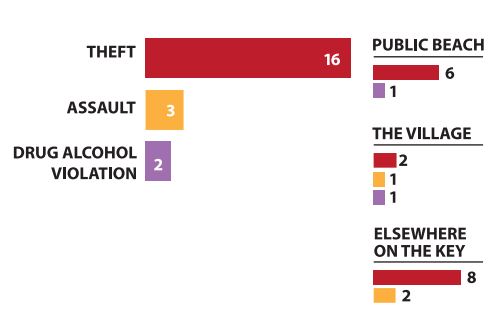 A woman reported an unknown subject stole her iPad from her condo unit. The woman and her family had been vacationing at the condo. After checking out and leaving the area, she realized she left it in the nightstand drawer. A few minutes later, she returned to the condo. The manager walked her up to the unit and found the cleaning crew there, but not the iPad. The cleaning crew denied taking it. Later that day, the victim called the condo and spoke with the manager to let her know that she had filed a report with the Sheriff’s Office. The manager told the victim that the missing iPad had “mysteriously” reappeared in her office.

The victim and his wife were on a morning beach walk near access #5 when he noticed a group of juveniles in the water with an unleashed dog. The man told the young males that they could not have a dog on the beach due to the law and for the protection of the endangered bird species. One of the juveniles removed the dog from the beach but another had already called out to someone believed to be an uncle of one of the juveniles. This suspect, who appeared to be under the influence of drugs or alcohol, approached the victim and accused him of touching one of the young men and shoved him in the upper body, yelling, “ If you come back here, I’ll kill you” or something similar, according to the victim. The suspect and the victim went their separate ways on the beach, and the victim called the Sheriff’s Department for assistance. The man was described as a very tan male in his late 30’s or early 40’s with short, buzzed hair. Deputies searched the beach for the suspect but were unsuccessful. The victim wished to press charges, if and when the suspect is located.

A woman had her wallet stolen from inside her purse while she went for a swim at the public beach. The woman had left her purse on a beach towel near the yellow lifeguard stand while she went in the water. The victim never saw anything or anyone suspicious near her towel. The leather wallet, valued at $100, contained approximately $50 in cash and her driver’s license.

A man out for a late night swim in the gulf had his wallet stolen off the beach. The victim placed his wallet containing his driver’s license, $20 cash, a credit card and a key near a lifeguard stand while he swam. Sometime between 3 and 4 a.m., it was stolen. He stated during that time he noticed a light in the area and assumed it was a lifeguard.

The owner of a Village retail store reported a theft at his business. He witnessed a man in his early twenties wearing a white shirt, black pants and a large backpack walk into the store and take a small piece of cosmetic jewelry. The small ring is valued at $2.99. The owner witnessed the subject slip on the ring while taking off the price tag. The owner asked the suspect to give the ring back and leave the store. The subject replied that he had bought the ring last week and that he should call the police if he was sure it was stolen. The subject left the store with the ring shortly after and headed south on Ocean Blvd. The incident was captured on video and will be submitted into evidence.

A man reported his Samsung Galaxy phone, valued at $500, stolen from the Public Beach Parking lot. The complainant’s vehicle was parked in the lot while he visited the beach. The windows were in the down position and the car was unlocked. Due to the fact that there was no evidence of forced entry and that nothing else was disturbed, the car was not processed for physical evidence.

A man approached deputies on foot patrol in the Village to report that someone had stolen his golf cart from in front of a Village nightclub. He did not witness the incident. The golf cart is a limousine-style Club Cart “Precedent” model with blue neon lights. A bouncer at another establishment noticed the cart heading southbound on Ocean Blvd. A BOLO was issued and deputies expanded the search quickly. The cart was eventually recovered in the 5800 Block of Midnight Pass Rd, parked and undamaged. There are no suspects.

An owner of a south Siesta Marina reported a theft at the business. Sometime between 8/12 and 8/14, someone entered their Carolina Skiff tour boat and removed 2 Yeti coolers. The complainant said the boat was tied up in the basin behind the business. The suspects apparently lowered the front ramp and dragged the coolers off because the grip tape was damaged. The coolers had been locked together around a pole in the center of the boat. They were valued at $1000 and $1800. There were no known witnesses or suspects.