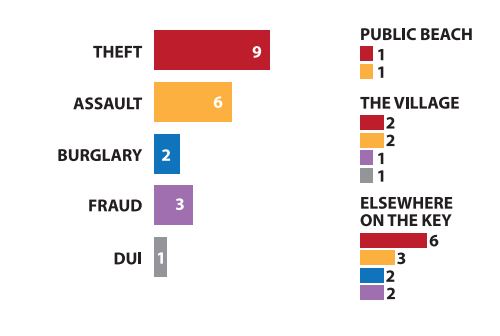 Deputies were dispatched to Access 2 in reference to a theft. The victim, a 14-year-old female, advised that her red “Bose” Bluetooth speaker ($130) was taken while she was on the beach. Her friend had a pair of sunglasses ($15) that they believed were stolen by the same suspect at the same time. The victim said a juvenile white male named Thomas had stolen the items. After describing the car in which he left the beach, he, and the driver of the car, was stopped by another deputy. The driver was adamant that he did not know the speaker was in his car and Thomas apologized and explained that he had not stolen the speaker; he had only run away with it after some other juveniles tried to search his backpack. He didn’t know anything about the sunglasses. The females were satisfied with the investigation after getting the speaker back and did not wish to press charges. Parents were contacted and waivers of prosecution were signed.

A man visiting the beach had his wallet stolen from his car while it was parked. The wallet, which had been in the glove box of the rental car, contained his license, $10 in cash and multiple credit cards. The man later found out his credit cards had been used at 5 different gas stations around Sarasota County. The victim thought he had locked the car although there were no signs of forced entry.

A theft occurred at a Village Market. A loss prevention employee observed on camera two males enter the store and walk around. The men were then seen entering the aisle where the Fever Tree Ginger Beer was located. One of the men was seen ripping open a four pack of the beer and placing a bottle into his backpack. As the suspects approached the front of the store and attempted to leave, the employee asked them if they wanted to purchase the beer. Both men ran out of the store at that time. The beer was valued at $7.89.

A Village restaurant was the victim of theft when two unknown males walked out on their bill. One was wearing a bright green hoodie and a hat with a rooster on it and the other wore a dark blue long sleeved shirt. They were believed to be driving a black mustang convertible. A neighboring business had surveillance video of the suspects. A picture was captured from it and placed into evidence. The unpaid bill was approximately $90.00.

A man reported he received notification from Experian that an unknown suspect applied online for an American Express card using his name. The suspect used some of the man’s personal information to do so, thus stealing his identity. The case was still active.

A woman reported her safe had been broken into sometime during the past summer while she was out of town. The safe, which is located in her bedroom closet, contained miscellaneous jewelry. The woman first noticed the items missing when she returned to her condo in September. Although there were no signs of forced entry, she found a key sticking out of the safe and several items missing from it. She did not report the crime at that time because she was still attempting to remember all of the items that had been in the safe. Several people had access to her condo over the summer as she was having her bathroom remodeled during that time. The missing jewelry was valued at approximately $2425.

A woman recovered an envelope containing $3000 in cash that she had originally reported as stolen. The woman had reported that she had placed the envelope in a drawer on 12/28/17. She realized the envelope was missing when she went to retrieve it on 1/2/18. The complainant and her husband stated they looked for the cash for about a day before calling law enforcement. There was no evidence of a forced entry and the front office of the condo stated that the condo had been cleaned by staff prior to 12/28 and had not accessed the apartment since then. On 1/9, the complainant called the Sheriff’s Office to say that she had found the envelope of cash in a cosmetic bag that she had apparently placed in another room.

A woman reported items stolen from her parents’ residence. The woman, whose parents now reside in a nursing home, had hired a cleaning service she had worked with in the past to clean the apartment. Since she was not available to let the crew into the apartment herself, she asked her realtor to meet them for her. Once the crew was inside, the realtor left them alone to clean. When the woman came back to give a check to the crew, they said they needed another 30 minutes to finish up. The woman advised the subjects that she had to be somewhere and that they could shut the door when they were finished and not worry about locking up since she would be back to do it. On this same day, a member of the cleaning crew had asked if she could have some of the clothing in the closet. The woman told the subject she did not want to give away the clothes. The woman returned to the apartment after the crew had left and locked the door without inspecting. The next day, she returned and noticed that the Captain Spy glass made of wood ($1000) was missing as well as the clothes from the closet ($1500). The names of the cleaning crew were reported and the case is under further investigation.

Are some property owners drawing too big a line in the sand?