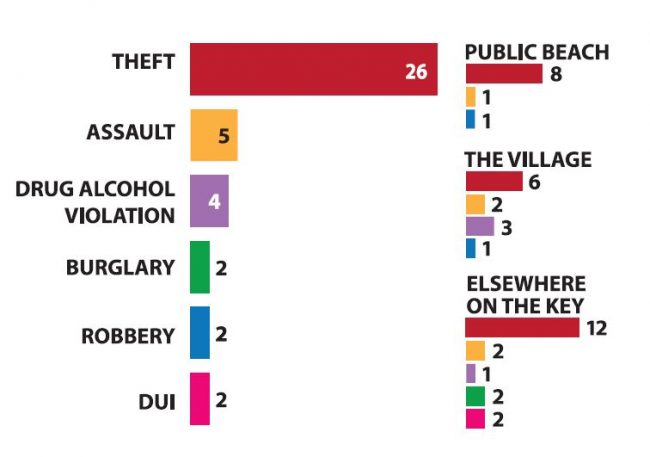 A man returned home from out of town and observed a window screen out of one of the windows on the bottom floor of his residence. There were pry marks on the window, evidence of an attempt to get inside. A white pillowcase not belonging to the complainant was on the ground next to the screen. Two other doors appeared to have been pried with an unknown metal object. Deputies dusted for prints but were unsuccessful in lifting any. Photos were taken of the doors and windows and submitted into evidence. It did not appear that entry was made into the residence and nothing appeared to have been taken.

A man reported he left his backpack on the beach at Access 2 while he went for a swim. When he returned his bag was gone. Although he did not see anyone take it, he believes it was stolen. He was unable to track his IPhone. The backpack contained; his wallet, ID, a credit card, IPhone 8, a shirt, swimsuit and a BMW key fob. The missing items were valued at approximately $1232.

Deputies responded to a call regarding the theft of a television from a Village rental. When the housekeeper entered the room she noticed the TV was gone. No signs of forced entry were observed. The manager assumes someone used the key located in the key box mounted to the wall next to the front door to gain access. All employees have access to the key box and the manager felt it might have been an “inside job”.

He will contact the Sheriff’s Office with any additional suspect information.

A woman reported that an unknown subject took her vehicle, which was parked in her driveway. She stated she had returned from a daytrip to Orlando with her son and a male friend and immediately went to bed. When she woke up around 7 a.m., she realized the car was not in her driveway. She called her friend who stated that when they had left her home in an uber before 7, the car was not in her driveway. The car was unlocked and the woman stated she still had possession of her keys. The vehicle is paid off and would not have been repossessed. There are no known suspects. The 2007 GMC Yukon was valued at $14,000.

A man who owns property near Beach Access 2 reported a theft. He explained he had placed two wooden stakes on his property that stated “No Trespassing.” He was near his property when he observed a woman pull the wooden stakes from the ground and walk away with them.  After telling the woman they were his property, the woman replied, “no, they are garbage.”  The woman left the area and could not be located. The value of the wood was approximately $10. No further action was taken.

A man hanging out in the main pavilion area of the public beach reported his wallet stolen. He had placed his items on a table for a few minutes. When he turned around, he noticed his wallet was gone. The wallet contained various gift cards, and a Florida ID. There were no witnesses.

A man reported to Crime Stoppers an attempted burglary to his vehicle. A video was submitted and the case is an open investigation at this time.

A man reported his fanny pack/ wallet stolen from the Public Beach. He explained he had left it on the beach with his chair and when he returned, it was missing. The contents of the pack were FL drivers license, 2 credit cards, AAA card and an insurance card. The total value was $80. There were no known suspects.