We have received a steady stream of inquiries from visitors asking about all the construction taking place on Siesta beach and the surrounding area.

With the return of our snowbirds and an increase in volume of visitors to Siesta Key, it’s a good time to provide another overview of the plans the County has in place to upgrade many parts of the beach, its parking areas and amenities.

There are actually two separate projects taking place. One is the Beach Road Drainage Improvement Project that is visible from Beach Road as you head to the beach from the south bridge.  The purpose of this project is to construct a stormwater treatment system to reduce the amount of contaminants that end up in the Gulf of Mexico. “It was not designed to alleviate the flooding problem that occurs on Beach Road during heavy rainfalls,” according to Alex Boudreau, project manager for Sarasota County Public Works.  The existing retention pond was filled in to make way for a larger one set further back. This is the shorter of the two projects and is expected to be completed in the early part of 2014.

The other project, consisting of four phases, is the Siesta Beach Park Improvement Project which began in November 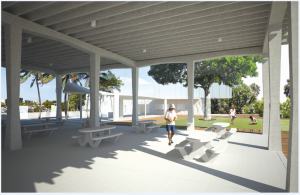 2013.  This project will increase and improve parking and pedestrian access, upgrade and expand recreational opportunities and facilities, and restore the historic pavilion built in the 1950’s.

When all is said and done, the new look will be impressive and include some nice perks.  The following maps along with illustrations of the proposed upgraded pavilion, provided by the County, describes what will be completed during each phase of construction.

This legend accompanies the following maps.

Please note that the information depicted on the maps are based on November 2013 data from scgov.net.

Click on the accompanying legend and or following maps to enlarge them for better viewing.

#19 – Playground is under construction

Parking is same as original