As this issue of Siesta Sand was being published, the engineer for the City of Sarasota was expecting the Florida Department of Environmental Protection (FDEP) to issue its formal Notice to Proceed at any time for an emergency beach renourishment project on Lido Key Beach. 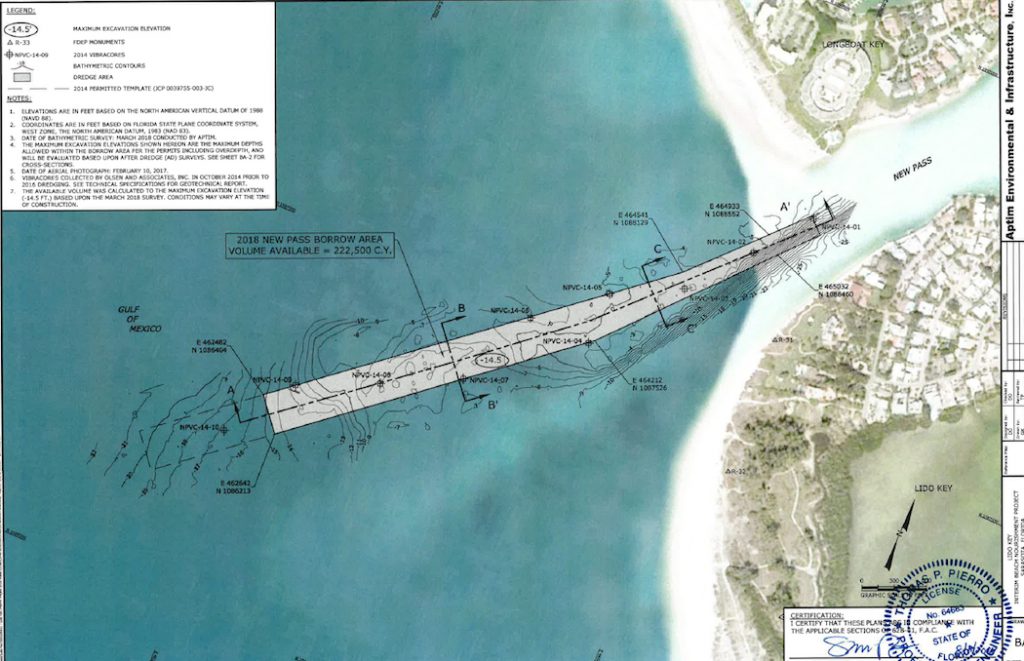 According to a technical specifications document from the city, which FDEP has posted on its website, the dredging of New Pass would begin no later than Nov. 14, and the entire project would have to be completed by Feb. 12, 2019. The document said the contractor would have 90 consecutive days to finish the work, “which includes lead time for mobilization of all resources (dredge, equipment, personnel and materials, etc.) necessary to complete the work and demobilization of said resources evidenced by the complete removal of all equipment and materials from the beach and project work sites on Lido Key.”

During an Aug. 6 segment on ABC7 in Sarasota, City Engineer Alexandrea DavisShaw said the plan is to use about 185,000 cubic yards of sediment from New Pass. The latest materials the city has submitted to FDEP say 222,500 cubic yards of sand is available in the New Pass borrow area.

According to spokesman Jason Bartolone the city already has the permit for the emergency project.

The city alternates with the Town of Longboat Key in using sand from New Pass for renourishment initiatives. The city applied to the Federal Emergency Management Agency (FEMA) to undertake this latest effort so it can repair damage inflicted on Lido by Hurricane Hermine in 2016 and Hurricane Irma in 2017, according to a July 10 letter to DavisShaw from Thomas P. Pierro, director of operations for the Boca Raton firm APTIM — the city’s consultant for the emergency project. He was providing responses to a Request for Additional Information from FDEP, which the city received on June 29.

Pierro pointed out that the renourishment would take place along the central and southern portions of Lido’s shoreline.

However, two representatives of the Siesta Key Association have questioned how FDEP can allow the project to proceed, because no inlet management plan was completed after the city’s removal of sand from New Pass in 2014.

In correspondence with FDEP staff, Robert Luckner, a member of the nonprofit organization’s Environmental Committee, has pointed out that the plan was a provision of the permit for that prior project.

Nonetheless, Gregory W. Garis, a staff member of FDEP’s Division of Water Resource Management, replied in a July 31 email to Luckner, “We have been in contact with both the City of Sarasota (City) and the Town of Longboat Key (Town) regarding the need to conduct an updated Inlet Study. Several factors have delayed the execution of a study to date, mainly storms and projects in the area,” Garis continued. “We will be scheduling a call with the Town, City and their respective coastal engineering consultants to discuss paths forward and stress the need for a study.”

Garis added, “I also wanted to provide clarification on our procedures for adopting inlet management plans as well as the difference in an inlet study and an inlet management plan. Upon completion of an approved ‘inlet management study’ by a local government and their coastal engineering consultant, the Department will develop an ‘inlet management plan’ to implement those strategies determined necessary to balance the inlet sediment budget and to mitigate erosion to adjacent beaches, pursuant to Section 161.142, Florida Statutes [his emphasis].”

Garis concluded his July 31 email by noting, “Lastly, because the permit doesn’t specifically require that a study be submitted for a Notice to Proceed, nor does it have a specific condition requiring a study, we cannot withhold a Notice to Proceed for this reason.”

Luckner responded the same day, writing, “With all due respect, that is a pretty tortured reading of the regulation which plainly reads: ‘62B-41.005 (15) requires that ‘Where such a plan is not available the applicant shall provide the information required in paragraph 62B-41.008(1)(b), F.A.C., and shall, as a condition of the permit, be required to provide a complete inlet management plan within a period of not less than two years from the date of issuance of the permit’ (emphasis added).”

Luckner continued, “This law says that it is a condition of the permit and the City and Town are required to provide a complete inlet management plan for FDEP approval. How can you say that it is not a condition?”

Bartolone, the city communications specialist, wrote in his Aug. 7 email to that the city would defer to FDEP any comment on Luckner’s points.

FDEP did not respond to requests for comments about Luckner’s emails to the department.

The July 10 letter from APTIM Director of Operations Pierro to City Engineer DavisShaw did address Luckner’s questions. It said, “There is no requirement [in the permit the city will use for the emergency project] for the permittees (the City of Sarasota or Town of Longboat Key) to prepare an Inlet Management Plan. Although discussed as part of the normal course of permit application review and coordination, the permit was issued on July 2, 2015 without any condition regarding the Permittee to provide an Inlet Management Plan.”

Pierro pointed out that “the existing New Pass Management Plan … completed in 1993 … provides the basis and justification for dredging the channel and placing the sand on Lido Key and Longboat Key. The Project remains consistent with … long established practices for dredging the federally authorized navigation channel of New Pass and nourishment of the Lido Key shoreline, and is authorized under current permits. The FDEP is the only entity that can formally adopt an Inlet Management Plan, which is beyond the City’s control and not required for the [emergency] project to move forward.”

“Furthermore,” Pierro continued, “the City has been coordinating closely with the FDEP for the upcoming Project and has received no indication the State would ‘suspend this permit’ as suggested by [Luckner’s] comment.”

Second, Pierro responded to a comment Luckner had provided FDEP regarding the potential for the city to use a different sand source, including trucked-in sand, since the inlet management plan had not been completed. (The Town of Longboat Key brought in sand from Immokalee in Lee County in 2016 for a renourishment project on part of its beach.)

“[T]he City will maximize the economy of scale with an estimated volume of 175,000 cubic yards dredged form New Pass and placed on Lido Key,” Pierro wrote. “A truck haul of equal quantity at $70 per cubic yard would exceed $12,000,000 and be cost prohibitive,” he added.

“The Project is eligible for FEMA funding and is authorized under current state and federal permits,” Pierro concluded the letter.