Siesta Key resident Michael Cosentino, who remains embroiled in litigation against Sarasota County in a road vacation case, has filed as a Democrat for the County Commission District 4 seat held by Commissioner Alan Maio of Nokomis. 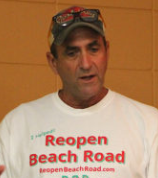 Maio won his first term on the board in November 2014.

Cosentino filed as a Democrat on June 14, Sarasota County Supervisor of Elections Office records show. He will face Wesley Beggs, a marketing and media entrepreneur, in the Aug. 28 primary.

Beggs filed for the race on Feb. 8.

In June 2016, Cosentino filed a complaint in the 12th Judicial Circuit Court, alleging that the County Commission violated the county’s Comprehensive Plan when it voted 4-1 on May 11, 2016, to vacate a 357-foot-long segment of North Beach Road. Only then-Commissioner Christine Robinson opposed the petition for the vacation, citing the same section of the Comprehensive Plan on which Cosentino based his complaint.

Maio represents Siesta Key, which is part of District 4. He was among the board majority that approved the road vacation, which was sought by three sets of North Beach Road property owners.

The case remains in the discovery phase. The county already has won dismissal of parts of the amended complaint that Cosentino filed in February 2017.

In recent months, Maio has far outpaced his opponents in fundraising, bringing in close to $90,000 in monetary contributions, plus a $10,000 loan he made to his campaign, his latest financial records show. He has raised another $474.89 through in-kind services. As of the end of May, he had spent $18,574.35.