Teens in a jeep try to scale a house 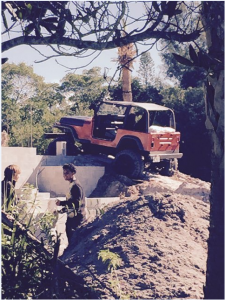 By all appearances, it seemed that the two teens shown in the picture were trying to drive right up onto the foundation of a home that was being built on the corner of Treasure Boat Way and Ocean Blvd.

Not successful, they added insult to injury when they got the jeep stuck in the thick dirt alongside the home. A concerned Siesta Key resident said he called the office of the Sherriff’s Department on the Key and left a message, but didn’t think anyone came by. He said the parents of the teens eventually showed up in a mini-van and pulled the jeep out of the dirt.

There was no damage to the concrete structure.

Even the longest-lasting relationships sometimes have rocky starts.

“They didn’t understand the full duties and responsibilities of the contract,” said Mark Smith. “But we had a meeting with the County and with Buccaneer, and we’re all on the same page now.”

The contract with Buccaneer does not just include trash collection and landscaping, it also encompasses repairs on benches, statues, fountains and even the gazebo. Coming up soon will be the planting of some new annual plants, which had been delayed because of a leak in the Village irrigation system.

Back in October, Ben Loeser, project manager with the Florida Department of Transportation (FDOT) made a proposal to the Sarasota County Commissioners on a project that would give new life to the aging Stickney Point Bridge. In general terms, it would include reconditioning the drawbridge’s electrical system and machinery, and repairing and refurbishing the concrete and seawall.

According to the public information officer for District 1 of the FDOT, the six to seven-month project is scheduled to begin on time, just after Easter. Robin Stublin says that the scope of the bridge repair project will address the following:

* Steel components on the movable spans.

*Deteriorated concrete throughout the bridges.

* Machinery that operates the movable spans.

Work will be completed during the nighttime hours of 9 p.m. to 6 a.m., and there will be lane closures, similar to when the Siesta Drive Bridge project was being worked on in 2012. The entire project is expected to be finished by the fall of 2015.

Since work began at Siesta Public Beach in 2013, it seems like there is something new and different every time you go. The project’s main objectives were to increase and improve parking and pedestrian access, upgrade and expand recreational opportunities and facilities and restore the historic pavilion, which was built in the 1950s.

Brad Gaubatz, who works in Capital Projects – for Sarasota County Public Works, said that the project is steadily moving in stages. The next phase begins in the spring.

“The parking lots that you see now will be what’s available until late February or early March, when the next phase turns over,” he said. “Jon Smith (the general contractor on the project) is actually ahead of schedule on the parking lot component.”

When the parking part of the project is completed, there will be 143 new spaces, with what Gaubatz said will be a much better layout. He says he feels encouraged by the compliments he’s been getting about the Public Beach work that has been completed so far.

“I haven’t heard many complaints, and that’s always a good thing,” he said.

Wastewater Update on the Key

Easter egg hunt gets kids, parents back on track