Citing a “decline in service,” Mark Smith, chairman of the SKVMC, announced that the group is not interested in renewing Championship Landscape Maintenance Professionals’ contract.

When Championship, a Ft. Myers-based company, won the contract in 2012, the SKVMC had been impressed with the feedback from some of its then clients like the Resort at the Longboat Key Club. However, that contract has not been renewed either.

In a flurry of emails and meetings over the past month, commissioners and SKVMC representatives discussed possibilities for landscape maintenance in the Village for the future. After Championship’s contract is up on August 21, the Maintenance Board was in agreement that a property management company may be better suited to fit the needs of the Siesta Village district.

As the bids are reviewed for a new vendor, the SKVMC will be paying particular attention to including curbside recycling to the contract. Currently, Sarasota County requires residents and businesses to recycle, but there is no curbside recycling in Siesta Village.

In today’s edition of “The Market Really is Improving,” the recent sale of a Siesta Key home at 4300 Higel Avenue brought in $10.25 million–the highest price paid for a home in Sarasota since 2011. The home is 8,600 square feet and has its own private beach, in addition to a state-of-the-art kitchen, an elevator, Brazilian wood floors and bedrooms with an ocean view.

The Women’s Council of Realtors reported that the luxury home market is not the only segment where sales are improving. A total of 1,195 homes sold in Sarasota in April, which was just 28 homes shy of a record that had been set back in the salad days of 2004.

Experts say that in a market turnaround, the lower-end homes are usually the first to recover. Michael Saunders Company, which sold the Siesta Key home, also has pending sales of homes that were listed for at least $7 million each.

In a stunningly quick turnaround for a construction project, Sarasota County began a project on North Shell Road, just off Higel Avenue that they anticipate will only take less than a month to complete.

The estimated $30,627 enterprise will include 17 parking spaces along the road, which currently has no designated parking spots, and will add six parallel parking spaces by getting rid of a pedestrian sidewalk. Surprisingly, the county expects to be completely finished with the work by July 3.

Community residents had pushed for the work to be done, because the lack of parking during season and busy summer months was becoming a problem. Beachgoers were lining the road, blocking driveways and leaving trash, and other undesirable objects, in neighboring yards. And both the county and North Shell Road residents agreed that the parking problem was becoming a safety issue.

The new project should provide some peace of mind for all parties involved. 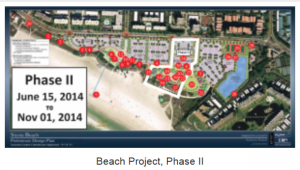 Swift Construction, the contractor working on the improvements should have Phase I wrapped prior to the 4th of July activities on Siesta beach. Sarasota County Facilities Manager Brad Gaubatz commented, “This will be a pretty amazing achievement by them, [Swift Construction] given the late start due to the Beach Road Drainage project and colossal rain last fall”. The new tennis courts is expected to be open by the July 4th holiday.

For more information regarding the Siesta Beach Park Improvements project go to: http://siestabeachinfo.com/construction-updates/

Blasé Café has a new neighbor; 314 Pizza π (pi) and Craft Beer Board Room. Actually it’s an expansion of Blasé Café where signature fresh pizza is offered with a full bar that includes 14 craft beers.

The location vacated by Heavenly Cupcakes in the Village has been

reopened as Bisou Boutique, formerly Le Grand Bisou. Bisou’s owner, Martha Smith feels the move will give her more exposure bringing her closer to the hub of activity. She intends to open an art gallery in her former location.

Owners, Tom and Kay Kouvatsos, of The Village Café have given their restaurant a fresh coat of paint both inside and out and decided to change out their wall décor at the same time. Paintings by local artist Shawn McLoughlin (SiestaShawn.com) now decorate the walls. The dozen or so paintings are Siesta Key scenes done in watercolors and oil.

Not to be out-done, a few of the other storefronts, managed by Roz Hyman have also received a paint job recently.

Down on the other end of the island in Crescent Plaza, another restaurant is set to open their doors. Munchies Subs & Ice Cream, located at 6639, unit #5, is expected to open this month. Says owner, Nick Capotorto, “We’re very happy to be opening our sixth store. This one, however, will be our first one in Florida”. 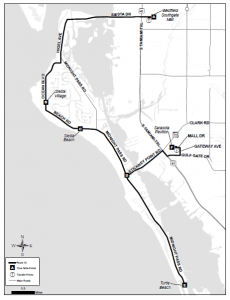 Kendra Keiderling, the department marketing coordinator, confirmed that daily passes will be available for purchase. The daily pass is $4.00, and can be purchased from the bus driver directly or you can pay $1.25 per use.

With this roll –out, SCAT is also introducing a new application for Smartphones allowing you to obtain Real-Time Information (RTI) for bus arrival times. New signage will be installed that includes the bar codes for this app. Those riders without Smartphones can check routing information on the website: www.scgov.scat.net or call 941-861-1234.

The existing Siesta Key Route (#11) will remain unchanged and will continue to run every 25-30 minutes. So how will you be able to quickly identify the new bus/trolley? The six trolleys which will be serving this new route will be sporting beach-themed “wraps.”

At the April and June SKA monthly meetings, one of the items presented than later discussed was the Post Disaster Redevelopment Planning (PDRP).

At present, it is a work in progress, and the final approval is not scheduled until sometime in October. The County stressed that a proactive approach with community input was essential, so I suggested providing residents with a re-entry pass, an inside car sticker that would be provided annually for a small fee for residents and business owners.   This is the same plan that is used down on Fort Myers Beach and other areas that have experienced recent hurricanes. These communities have taken a proactive approach for residents and business owners to re-enter the islands.

At the June SKA meeting, SKA board member Paul Wilkinson expressed real concern that the PDRP re-entry plan is reactive. The Sheriff’s Department would issue wrist bands only after a disaster happens.

I owned a home on Fort Myers Beach when Hurricane Charlie hit Florida in 2004. It was a category 4 hurricane and the plans that were in place were inadequate.

At the time, officials barred anyone from returning to the island for fear of looting. Unfortunately, this caused even more property damage due to mold. As a result, proper steps were put in place to address these problems. One solution was to allow island residents re-entry sooner to start the cleanup process. Fort Myers Beach uses the window sticker valid seasonally from June 1st through the end of November.

Members Wilkinson and I will be meeting with County officials the week of July 7th to discuss our concerns.

Siesta Key has been named the #3 on Tripadvisor’s Top 25 BEACHES IN THE UNITED STATES, #10 in their TOP 10 BREATHTAKING BEACHES IN THE WORLD, and now, #2 of their BEST UNDERRATED BEACH TOWNS.

It’s obvious that the 99% pure crystal quartz sand that makes up Siesta Public Beach plays a big part in the many honors this island has received, so why mess with a good thing?

Based on the 171 page report that the Army Corps of Engineers (ACOE) released in mid-June, it verifies the safety of sand mining, thereby supporting the dredging efforts. Coastal sampling was to comply with Federal Department of Environmental Protection requirements for obtaining a ‘Sand Borrow’ designation in those areas. They have now submitted the Lido shoreline mitigation plan to County staff in Natural Resources and Coastal Management. Staff will provide an overview and summery including regulatory and environmental impact information for Commissioners to consider before they recess for summer in August.

In 1973 Sarasota County residents, in a 9-1 county wide margin, approved 1/2 mil on property taxes for 30 years or until funding was complete toward purchase of this land to maintain it in its “natural state for open use by the public”.

Save Our Siesta Sand 2 (SOSS2)

According to the Save Our Siesta Sand 2 (SOSS2) site, the project is now larger than originally proposed, calling for more sand to be mined. The site indicates that “None of our questions have been answered. This study needs to be vetted by a 3rd party unrelated to those who are being hired by the city and the county”.

If you are concerned about Big Pass and what removing over 1.3 million cubic yards of sand might do, please go to the website www.soss2.com and submit a petition, write to your commissioners and help us convince them that this is not the best way to solve Lido’s sand problems.