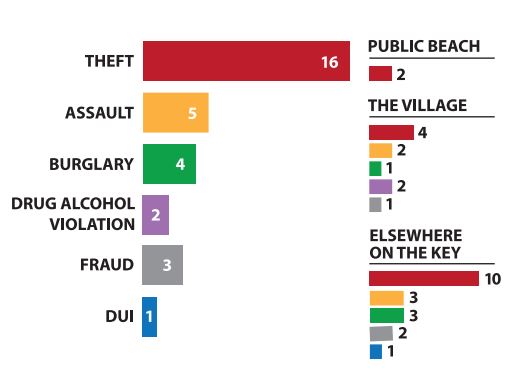 A woman reported her white 2010 Nissan Altima stolen.  She had parked the car in the market parking lot overnight and found it missing upon her return in the morning. She explained that the car was paid off and it would not have been repossessed. The car was locked and she was in possession of the keys. The sheriff’s Department had no record of that car being towed. The storeowner will be reviewing surveillance video for any further evidence.

A woman reported that associates of her juvenile son entered the mother-in-law suite of her home through an unlocked sliding door. She explained that her family had been out of town for a few days. The associates were the only people who knew that the door was always left unlocked. While the owners were gone, someone entered and took a Beats portable speaker ($550) and a custom wood long board ($600). The son had received a snapchat message showing a video of one of the suspects and several more unidentified teens having a party in the suite. Due to the disappearing nature of the snapchat format, the video could not be viewed again. Contact has not been made with either suspect. The case is still under investigation.

A very intoxicated man related that he had played golf on the day prior to this report, came home and called his girlfriend and invited her over for a visit. He fell asleep shortly thereafter. He said he woke up when the girlfriend came into his apartment and started pouring whiskey down his throat. He said they hung out for a while and then he fell asleep again. The man woke up and realized his checkbook was gone from the dining room table along with $1600 cash that had been in his back pocket. The couple had been dating for about 4 months but the victim could not advise where she lived or worked. He was able to provide her telephone number but could not explain the timeline or other details of the event.

A wallet containing $100 cash and a driver’s license was stolen from a man while he attended the drum circle. The man had placed his wallet in his bag and put it behind his beach chair. He did not notice anyone approach his location from behind.

Two wooden soldiers ($1000) were stolen from a woman’s yard. The Christmas statues were 5 feet tall, in her fenced yard and flanked her front door. Two males wearing shirts over their faces jumped over her fence, ran to the front door, grabbed the statues, and then fled over the fence. The woman will provide a copy of the surveillance video when it is available.

A painter reported that during the night, someone stole 10 five-gallon buckets of off white paint from the rear of a Siesta condo. There are no suspects and no known surveillance cameras in the area. The Scott paint was valued at $1500.

Two eighteen pack of Bud Light ($29.98) were stolen from a Village convenience store. An employee reported the subject entered the store and headed towards the cooler. He then picked up two packs of beer and ran out of the store without paying. The reporting officer was unable to view the security footage as the employee was new and had not been trained on how to use the camera system. He advised he would notify his manager who would provide a copy at a later date.

A man reported an unknown subject had stolen the license plate off the back of his trailer sometime during the last few months. The Florida plate had been affixed to a black utility trailer. It was stolen sometime between 9/1-12/9/17.