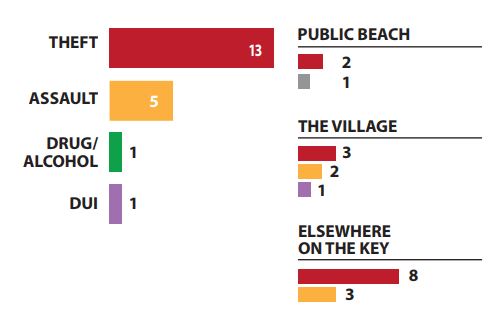 A woman reported that she believed an associate of hers had stolen her phone on 2/7/18 while she was at the Siesta public lot. She was very vague about the circumstances and had no evidence that the acquaintance had taken her phone. She said her phone (Lenovo Motorola-$200) was missing and that this acquaintance was the last person she had contact with before it went missing. The woman claimed she had delayed reporting the incident because she had just gotten back from bicycling to the Fort Meyers area. The woman stated she is “nomadic” and moves around constantly. She had no personal address, only another associate’s contact information who would take messages on her behalf. No information was found on the possible suspect aside from a 10 year old driver’s license. At the time of the report, there was not enough information to prove or disprove the woman’s claim.

On 2/22/18, a man reported his vehicle stolen from his home. He said he had brought home an unknown female he met in the Village. When he woke up, the woman and his car were gone. Five days later he called to advise that he had the woman’s car towed from his home. The responding officer reminded the complainant of his original report. The complainant stated he had been highly intoxicated and could not remember what he had reported. He stated that the woman had driven to his house before taking his vehicle and leaving hers at his house. The car she left behind was registered to her son. The woman’s mother was contacted. She explained that her daughter was a drug addict and had claimed to take her son’s car in order to get it repaired. The mother had last seen the suspect in a car matching the description of the missing car. The woman was found with the car and explained to deputies that she had traded cars with the complainant. The complainant, who had conflicting statements throughout the investigation, stated he did not remember filing a report and signed a waiver of prosecution.

A woman reported a check she had placed in her mailbox for outgoing mail had been stolen. The woman had gotten a call from Bank of America who told her that a man had written his name over the original name on the check and tried to cash it. They ran out of the bank when the bank refused to cash the check.

A man said he came out of his house and saw an unknown male driving away in a gold or tan pickup truck. He didn’t think anything of it until he noticed his green Ryobi chain saw ($550) had been stolen from his front yard near some logs he had been cutting. There is no further description of the male or vehicle.

A woman reported someone stole some of her jewelry. She and her husband had been staying at a condo for two months and were packing their car to leave. According to the victim, a blond woman pulled up next to them in a run down, beat up car and asked when they would be officially out of the unit because she had to get in to clean it. The victim’s husband told her they would be done in about half an hour and the woman agreed to come back later. The victim assumed that this is when the suspect went into the condo and took a pair of black pearl earrings ($1,000), costume earrings ($100), diamond earrings ($10,000), and a black pearl necklace ($2,000). The victim swears the jewelry was inside the condo and wasn’t just misplaced somewhere in the car.

An officer responded to a village bar in reference to a battery. He met with the suspect who admitted that he punched the victim in the face because he thought it was wrong to protest in front of the club. The suspect admitted that he was intoxicated and immediately apologized for his actions. The victim stated he did not wish to press charges and only wanted the suspect to apologize. The victim signed a waiver of prosecution and both parties separated upon request.

A man had a woman he considered a best friend stay at his house for a few days. After she left, he realized a credit card and $5 had been taken from his wallet. He checked his account to see if the card was being used and saw two transactions he did not authorize from a Citgo station; $8.55 & $8.01. When he called his friend to ask about the money she said she took the money to buy cigarettes. The man stated he did not want to press charges and only wanted the incident documented.

An employee of a village convenience store reported a man came into the store and purchased something small. Instead of leaving the store, he continued to walk around inside. She thought he appeared suspicious but she did not observe any crimes. After the man left she replayed the security video and saw that he concealed a bottle of wine and left without paying for it. The estimated value of the wine is $13. The suspect was not identified.

County ‘closest [it has] ever been’ in negotiations over getting control of Siesta roads, with state taking River Road