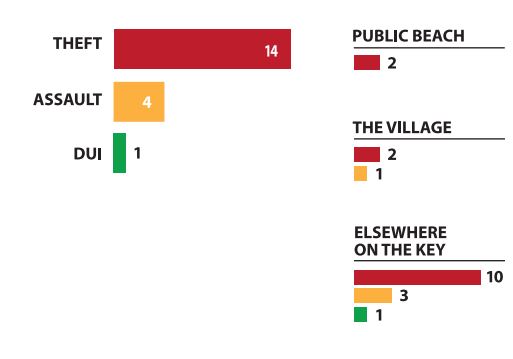 A man reported the theft of prescription drugs from his home. He had hired a company to do some work at his house. The man the company sent was working near the bathroom where the pill bottle was located. It had been in the medicine cabinet before the worker arrived. He noticed it was gone after the man left the home. The hydromorphone pills were valued at $300.

A rental car parked in a residential driveway was reported stolen. The complainant noticed the silver 2018 Ford Edge was missing from the driveway as he left early that morning. The car had been in the driveway the night before. Another car parked in the driveway owned by a relative had been broken into. At the time of the incident, the keys to the stolen vehicle were in the residence. The doors to the car were not locked. None of the occupants of the home heard anything suspicious during the night. There were no possible suspects and the home was not equipped with a video surveillance system.

A man discovered someone had rummaged through his glove box in the middle of the night. He reviewed on site video and discovered that three vehicles loitered on his street that night. The three cars acted as a unit with the first and third cars acting as lookouts. An occupant from the middle car could be seen running out and opening the complainant’s car door. He then turned on the interior light and rummaged around the center console. He ran out of the car towards the road and out of camera view. The man found nothing missing from his vehicle at the time. No fingerprints were found. The video will be turned in for evidence.

A man was arrested after reports of a red Mustang driving on sidewalks at a high rate of speed. Deputies located the car parked on the sidewalk of Midnight Pass. A man was observed staggering around the vehicle. As the deputy approached, the suspect got in the car and started driving forward. Assuming the driver was impaired, the deputy activated his emergency lights and stopped the vehicle.

The driver spoke with slurred speech and smelled of alcohol. He stated he was going to pick up his girlfriend and admitted to drinking “a little.” After saying he was getting his license and registration, he turned away from the deputy, put his car in drive and sped away heading north. Another deputy arrived on scene and gave chase to the defendant who was traveling at speeds of approximately 80 MPH. After a distance of .8 miles, the defendant pulled over. While it was apparent that the driver was under the influence, the driver refused to participate in field sobriety exercises. The man, who told deputies he was in the “Mexican Mafia” and that he wanted his trunk contents to remain confidential, was arrested.

A large crowd was gathered outside a Village bar to witness a fight between two males. Club bouncers were separating the fighters as the deputies arrived to the scene. They observed the subjects on the ground, struggling with the bouncers. The subjects were put into handcuffs and removed from the crowd for their own safety and the safety of the deputies. Multiple members of the crowd attempted to prevent the deputies from resolving the fight. One subject had a laceration on his arm but refused medical assistance. The other subject had no injuries. Each claimed the other had started the fight for no apparent reason. Due to a lack of witness cooperation, a primary aggressor could not be determined. Both subjects stated they did not wish to prosecute.

A woman reported someone stole several of her travertine tile pavers. She stated the pavers were delivered in an unopened crate and placed in her front yard.  Several workers were on her property doing housework and maintenance. The crew left the house and advised the pavers were still there. When they returned the next morning, they noticed the crate had been broken open. There were approximately fifty white travertine pavers missing from the crate. On site security cameras were not working at the time of the incident. There is no suspect information. The value of the pavers was approximately $2000.

A man filed a report regarding a bike theft. He said acquaintances of his girlfriend had briefly lived next door to him. He said last month the female admitted she and her boyfriend had stolen his $750 Cannondale bike and sold it. The man also reported a burglary to his second residence at the same time and by the same people. He said he had not reported the crimes earlier because he had been in discussion with the suspects and hoped to get his property back without law enforcement involvement. That had proved not to be the case.

What’s New Beyond the Bridges: April