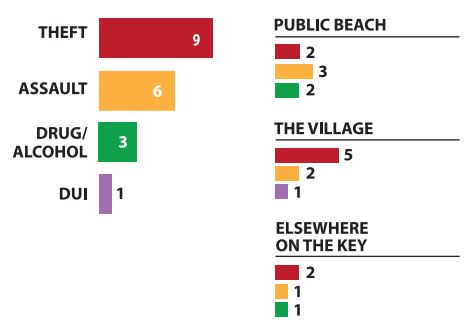 A woman visiting from Indiana reported the theft of two bicycles. She stated she had rented the bikes for her daughters who had ridden them to the community pool and left them out front. When they returned, the bikes were gone. The rental company was requiring the woman to pay for the stolen bikes. There are security cameras in the area. The footage will be reviewed and submitted if the incident was captured. The beach cruisers were valued at $225 and $220.

A man reported a battery had taken place. A deputy arrived and found the man nude inside of the apartment. The coffee table was flipped over and miscellaneous household items were on the floor. The man stated he had been on a date with a woman when an argument led to a physical altercation. The man said the woman bit him on the ankle and hit him with her hands. A bite mark was seen on his right ankle and a 5-inch scratch was seen on his arm. The man refused medical attention. He believed his wallet was missing from the home and while searching for it; a bag of marijuana was found and submitted into evidence. The man denied the bag was his and it was submitted as found property It was determined that the couple was not in a relationship and the man signed a waiver of prosecution. When the woman was contacted by phone, she first told the deputy she had never been at the man’s apartment. She then changed her story and said she had been there but was now out on a date and had no additional information.

A man reported his guest had witnessed a vehicle burglary. The woman advised she saw two male teenagers in dark clothing near the victim’s vehicle. She stated she saw them run west on Moonmist. She heard the subjects enter an unknown vehicle and leave the area. The owner of the vehicle was contacted and asked if anything appeared to be missing. A bag of quarters ($3) was the only item she believed was gone. The officer observed a cell phone charger on the ground. The victim stated that it had been in the vehicle.

An employee of a Village Market reported a theft. A male juvenile was in the beer isle of the store. The employee observed the suspect open a twelve pack of Corona beer and start to remove the beer cans. When he saw that he was being watched, he attempted to leave the area. The employee stopped the suspect and called 911. The incident was captured on the store security camera system. The suspect was very apologetic and remorseful for his actions. The complainant signed a waiver of prosecution and a trespass warning for the suspect who can never return to the store.

A deputy made contact with a teenage boy as he walked on the beach. A large Spring Break crowd was being dispersed. The boy was bleeding from a laceration to his nose. He declined when asked if he would like an ambulance. He stated participants of the crowd were going their separate ways when he made a comment in reference to his disapproval of the Villanova basketball team. At that time, numerous unknown subjects began attacking him and striking him. The deputy attempted to contact the boy’s parents but was informed that they were in Mexico and he was staying at a hotel with a friend’s parents. The deputy followed the victim to his hotel room and spoke with that parent who stated he would follow up with the victim’s parents.

Two eighteen-year-old women were arrested for shoplifting at a village clothing store. An employee noticed that the number of items a customer brought to the counter did not match the number she had brought into the dressing room minus the number she had put into the clothing not wanted bin. The employee checked the dressing room and found security tags were removed and found hidden in the trash. One of the women had fled out of the store when the employee approached the other. The woman opened her backpack and revealed some of the stolen clothing to the employee. A magnet was also present. The woman who had left returned to the store. A check of the trash can outside the store revealed the other clothing items taken. The women admitted they had gone to the store together with the purpose of stealing clothing. The magnet was present to defeat security devices. The cost of the items taken was $530.50

A 19-year-old man was located unconscious with a laceration to his upper lip. Approximately 400 individuals partying surrounded him. Aide was rendered until the victim regained consciousness. Once he was alert, he was brought to the main beach pavilion to be evaluated by EMS. He was cleared and released from the scene. During an interview, he said he drank about 5 beers and didn’t remember anything from the altercation. He believes he was “jumped” by random people. No property was taken from him. The victim is from out of state and staying alone at a nearby hotel. He had no friends witness the incident.

A woman reported an unknown person stole her beach chair ($20), beach bag ($40), and Georgia driver’s license ($45) while she took a 15-minute walk along the beach. Also taken were her keys and $14 in cash. There were no witnesses or suspects.