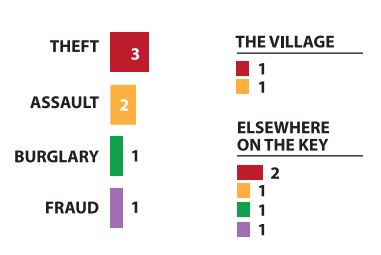 A woman reported nearly $20,400 worth of fine jewelry was stolen from her home. She explained she had returned to her condo from up north to find water on her kitchen counter. The condo was secure and there were no signs of forced entry. A half bottle of wine and three partially empty bottles of cranberry juice were present. These items were not there when she went back up north last summer. She advised she had unpacked and placed her two bags of Jewelry on the bedroom counter when she returned on 11/15. On 11/19, the woman reported the jewelry was missing. She at first thought she had misplaced the jewelry, but after searching for a day, called law enforcement. No signs of forced entry were present; no other areas of the condo appeared disturbed. The bottles had been disposed of and fingerprints could not be taken from door handles due to lack of surfaces handled. The condo management team could not be reached at the time and the victim was advised to change the locks and consider an interior camera system.

A woman reported her ex-husband came to her home late at night and asked for money. The discussion was held in a sunroom while sitting on a sofa. When the woman refused to give the money the defendant became upset and threatened to burn the victim’s sofa. The defendant proceeded to put a lit cigarette onto the sofa cushion and burned a hole in it. (Estimated cost to repair $500) The victim called the defendant’s family to come get him but they refused. The defendant was upset and became physical and grabbed the woman’s wrists and upper arms leaving bruises. He also struck her with an elbow to chest causing a bruise before leaving the area.  The woman’s injuries were photographed. She stated that the defendant has a drug problem and that she is concerned for her safety.

A kayak valued at approximately $800 was stolen overnight from a residential dock. The kayak, which was not locked up to anything when it was taken, was a 10-foot, green plastic, sit-inside, Sun Dolphin “Aruba”.

A man reported his ring was stolen. He was out to dinner when he went into the bathroom. Before he washed his hands, he took his ring off and laid it on the counter. He exited the bathroom and shortly after, realized he did not have his ring. He returned to the bathroom and it was gone. Employees of the restaurant said no one found or turned in the ring. The gold, thick men’s ring, with small diamonds was valued at approximately $3000.

An officer was on routine patrol in front of a Village nightclub when he was approached by an Uber driver who stated that a man was passed out on the sidewalk across the street. The deputy located the man passed out on the sidewalk. As he approached the man, he noticed his business card lying on the floor next to him.  It stated he was a Staff Sargent in the US Air Force. The deputy woke the man and asked if he could call him a cab and get him a ride home and the man spit on the deputy. When asked if he knew who he was, the Staff sergeant replied, ”Yea I see you’re a cop”. The deputy reiterated that he was there to help him and offered him a cab. At that time the defendant reached up and put the deputy in a headlock and hit him once in the face. The deputy pulled out his Taser and discharged it, striking the defendant. Paramedics responded to the scene, removed the prongs and medically cleared the defendant. The defendant was placed under arrest. It was noted that the defendant smelled of alcohol, had slurred speech could barely stand without the assistance of deputies.

A woman filed an identity theft report at the headquarters desk. As a result of a credit report check, she discovered credit inquiries from Credit One Bank, Three inquiries from Cap One NA and SYNCB/Wal-Mart, none of which were generated by her. Unknown suspects used her personal information to create the credit checks.

A woman reported that sometime while she was out of town, between July and August, an extension ladder was stolen from outside her residence. She stated it was in her yard but doesn’t know exactly when it was taken. She stores it outside because of constant work done on the landscaping in her yard. It was valued at approximately $400.