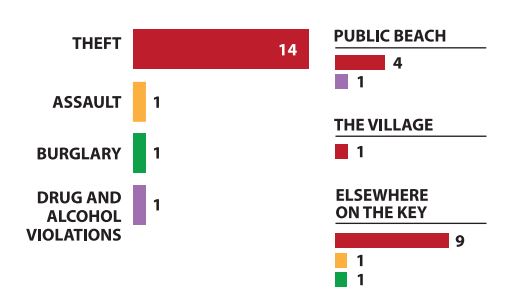 A woman reported several items of jewelry were missing from the closet of her home. She stated she had previously allowed her friend and her friend’s new fiancé stay in the apartment during June, July and August. A check of pawned items under the new fiancé’s name revealed nine items of jewelry fitting her descriptions pawned at a Sarasota shop on 6/28. He returned on 7/9 with four more items. Another item was pawned at a different shop on 7/16. The victim identified all the items. None could be recovered due to their being sold by the pawn dealers to be melted down. All pawn slips were recovered and fingerprints on the slips were the defendant’s. He later admitted to the crimes during an interview and claimed he did it in order to pay his father’s medical bills. He was arrested and charged with Grand Theft.

A man reported his mom was the victim of theft. The son is the power-of-attorney over her finances. Upon review he noticed large sums of money had been withdrawn from her account since July 2018. He asked his mom if she knew who could be withdrawing the money. She then realized that two of her credit cards were missing. The bank was contacted and the cards were cancelled. She stated a person had befriended her and she believes he may have taken the cards and been using them. The complainant completed a witness statement.

A woman reported that after leaving her purse in her car while spending time at the public beach, she was notified that someone had attempted to use her American Express to charge $2000 at a Best Buy. The woman had left her purse on the floor behind the front passenger seat and parked in the front row of the lot. There were no signs of forced entry and the woman unknowingly left the beach and headed to a Venice restaurant. While there, she received a call from her credit card company that someone was trying to use her card at the Best Buy in Port Charlotte. The woman checked her wallet and realized several of her cards were missing. While cancelling her cards she discovered various charges had already been made on her cards. The unknown suspect(s) had already charged over $5000 at various area Best Buys in under two hours. There were no suspects, although three prints were lifted from her car and submitted. The woman believes her husband might have hit the wrong button on the key fob and thought he locked the car.

A man reported unknown person(s) had stolen his paddleboard during the night. It was stored in a community storage area outside his home on Midnight Pass. The board had been secured in the storage area by a cable lock. The lock had been cut. There were no surveillance cameras in the area to capture the incident. The board was valued at $900.

An employee of a Village convenience store reported a theft. The employee had gone into the restroom while at work. Upon leaving the restroom, he was startled by a customer heading into the restroom just as he was leaving. The employee realized he had left his phone in the restroom and mentioned it to the customer as he entered the bathroom. When the customer left and the employee was able to go back in to retrieve his phone it was gone. The victim confronted the customer who left the store on foot. Deputies tracked down the phone to an area of the village. The phone was found nearby in the bushes. The suspect was questioned but denied all accusations. Prints were lifted from the phone and placed into evidence. The Samsung phone was valued at $125. The suspect was told he would be guilty of trespassing if he returned to the store.

A rental agent reported a burglary to a rental condo by an unknown person. The unit had been unoccupied at the time. An unknown subject entered the unit by removing a window (not broken) and entering a bedroom. The bed was obviously slept in and was discovered by renters upon moving in. Nothing else appeared to be taken or disturbed. It was noted that there were heavy intermittent rain showers in the area at the time of the incident. A deputy retrieved a hat left behind by the subject.

A group of individuals flagged down a deputy on patrol near the Sunday drum circle. The group had placed their belongings in a friend’s backpack and left it unattended for approximately 30 minutes while they attended the drum circle. When they came back to get it, the backpack was gone. The missing items included; 2 Samsung Galaxy phones ($600 each), IPhone 5SE($200), wallet with credit cards and $200 cash, and a Samsung Galaxy S7 Edge ($900). There were no suspects or witnesses. The victims were advised to contact their phone carriers and attempt to ping a location of the phones.

A woman reported her IPhone 7 was stolen from a bar. She had set her phone down on a ledge next to an ATM. She used the ATM and walked away. Within 5 minutes she realized she had left the phone and went back to retrieve it. The phone was already gone. Multiple employees stated no one had turned in a phone. The find my IPhone app on her MacBook showed the phone as offline. The victim was encouraged to keep checking the app for a location and check back with the bar. The phone was valued at $300.

Best of the Beach Club: 70 years and counting