New trolley operator to come on board 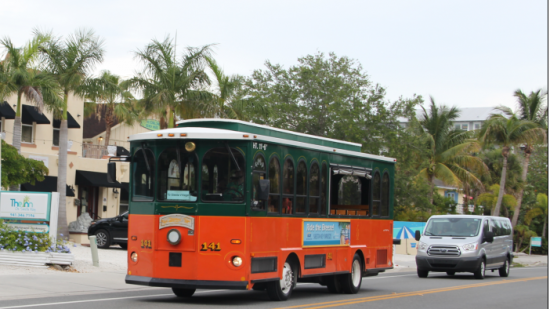 The Siesta Key Breeze will have a new operator as of Aug. 29.

On July 10, as part of their Consent Agenda of routine business items, the county commissioners approved a contract with C.P.R. Medical Transportation LLC of Washington, D.C., for the continued operation of the trolley.

The bid amount totaled $3,934,178 for three years, according to a memo from Rob Lewis, interim director of Sarasota County Area Transit (SCAT). The contract may be renewed for up to two additional one-year periods.

On Feb. 28, 2017, the board approved a contract with Ride Right Transit for six months, with options to renew for another six-month period and then month-to-month extensions for no more than six additional months, Lewis pointed out. As staff waited on a new solicitation for the service to be put out for bid, he added, the term contract with Ride Right was extended through Aug. 28.

On March 30, the county advertised for bids. Ride Right — which is based in Lake St. Louis, Mo. — and C.P.R. Medical Transportation were the only two companies that responded, based on a document included in the July 10 commission meeting packet.

After reviewing the responses, Lewis wrote in his memo, the county Procurement Official signed a Notice of Recommended Award on May 3, identifying C.P.R. Medical Transportation as the “lowest responsive and responsible bidder,” as the county’s terminology goes in procurement matters.

In his memo, Lewis also pointed to the success of the Siesta Key Breeze. In March of this year, he wrote, the trolley recorded its highest ridership level since it was launched on March 20, 2017: The Breeze had a total of 36,195 passengers.

Charlene Ross, the transit projects coordinator for the Florida Department of Transportation (FDOT), wrote SCAT staff a letter on May 3, concurring with the proposal to award the bid to C.P.R. Medical Transportation.

On May 8, the County Commission voted unanimously to approve a new agreement with FDOT to fund a portion of the trolley’s operating expenses through Dec. 31, 2019, Lewis noted.

When SCAT contacted to ask about the June ridership figure for the Breeze, Kendra Keiderling reported that it was 20,044. Keiderling is SCAT’s marketing, outreach and customer service supervisor.

She was among SCAT personnel who greeted Siesta business owners and residents who gathered on April 9 to mark the celebration of the Breeze’s 250,000th passenger.

During the County Commission’s regular meeting on July 11, Commissioner Alan Maio — who represents Siesta as part of his territory — pointed out that the ridership for the first full year of the Breeze’s service actually was higher than original reports indicated. Because of what he called “an unexpected computer glitch,” the number was off by 9,000, he said.

Discussion, off island parking spots for the trolley

The Breeze’s operations were just one of many topics on July 11 when the commissioners reviewed the latest updates from the county’s Parks, Recreation and Natural Resources Department (PRNR) regarding ways to reduce traffic congestion on the Key.

During a half-day workshop later this year, the commissioners plan to tackle the paid-parking issue in-depth.

In the meantime, on July 11, Commissioner Alan Maio expressed some consternation when Carolyn Brown, director of the Parks, Recreation and Natural Resources Department, reviewed efforts of her staff to try to work out proposals with owners of shopping centers near Siesta, so people one day could park their cars and then take a SCAT bus or the trolley to the beach. (Funding — perhaps from paid parking at the beach — would enable the Siesta Key Breeze to extend its route off the island, commissioners have pointed out on numerous occasions.)

“It’s been whispered to me,” Maio said, that perhaps owners of the shopping centers fear they will be penalized by the county in certain ways if they agree to set aside from 20 to 50 spaces for people taking mass transit service to the Key.

Maio explained that the county Zoning Code requires shopping centers to have one parking space for every 250 square feet of retail space. He added that he has heard that if the owners reserve some of their spaces for SCAT or Breeze customers, they feel county staff will keep them from expanding their facilities, if they desire, because they will not have the required number of parking spaces.

Some also fear they would end up having to deal with Code Enforcement staff over violations, he noted.

Addressing Brown, Maio said, “If, in fact, that is true, go to them and say, ‘this is an accommodation to your community. This is you helping the very community that patronizes [your businesses].’”

He added that she also could tell them, “‘You have a loudmouthed commissioner who is horrified that you turned us down.’” Assure them that Code Enforcement officers would not show up, Maio told Brown, if the shopping center owners “are trying to help us on this.”

Chair Nancy Detert chided Maio afterward, reminding him that she had called for an abbreviated discussion that day, given all the items on the board’s agenda. The need for plenty of time for discussions was why she suggested the workshop, she pointed out.

Additionally, during the time they did spend on the beach parking issues, Commissioner Michael Moran made it clear — as he has with other matters — that he believes the private sector ultimately will  provide the best means of alleviating the traffic congestion on the Key. For example, he said, Uber recently bought an electric bicycle company and is expanding its services to cities such as Washington, D.C.; Austin, Texas; and Chicago. The average user of the service is traveling 2.6 miles on one of the bikes, he pointed out.

“The private sector moves at the speed of light sometimes,” Moran said, “when we’re running in mud.”

A longer-range consideration regarding Siesta parking

Early in the July 11 County Commission discussion about easing traffic congestion on the Key, Chair Nancy Detert expressed a preference for delaying a proposed workshop on the topic until after the Florida Department of Transportation (FDOT) completes the Barrier Island Study involving Siesta. The County Commission approved that study earlier this year as a request among its priorities for the Sarasota/Manatee Metropolitan Planning Organization (MPO). The MPO added it to the list to forward to FDOT.

However, Carolyn Brown, director of the county’s Parks, Recreation and Natural Resources Department, explained, “The funding has not been allocated [for that study].” It is anticipated, she said, that the research will be funded in FDOT’s Five Year Work Program for FY2019/2020 through FY2023/2024.

Brown indicated that results of that study “would include recommendations for how to alleviate traffic and parking challenges on Siesta Key.”

The FDOT project would be similar to one the department has undertaken for the Town of Longboat Key and the City of Sarasota.

“I noticed that,” Detert added.

“We can’t, in my humble opinion, wait for that timeline,” Maio said.