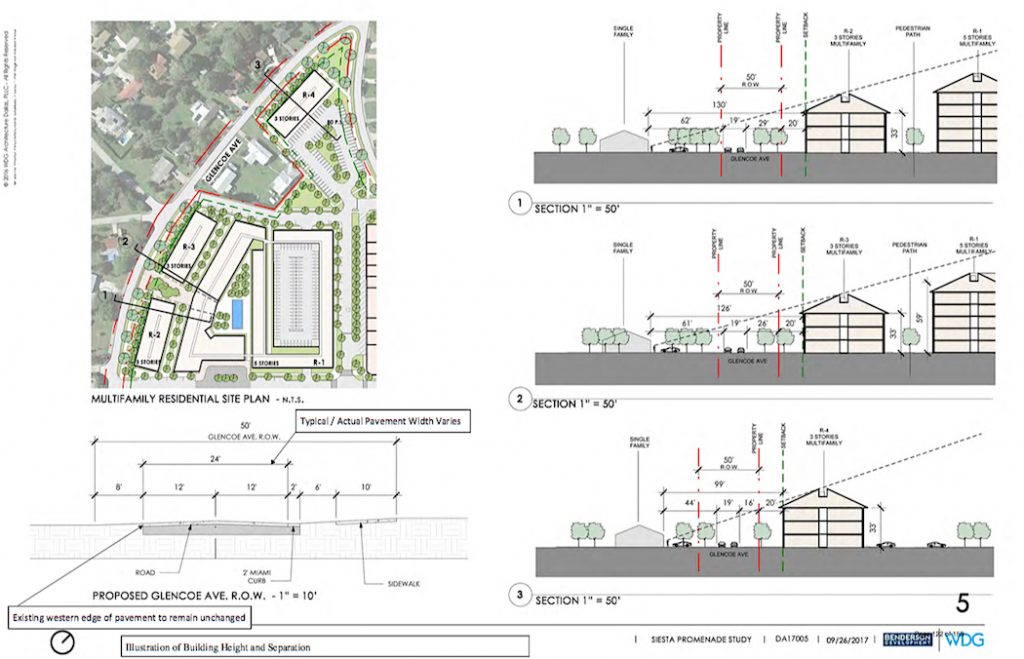 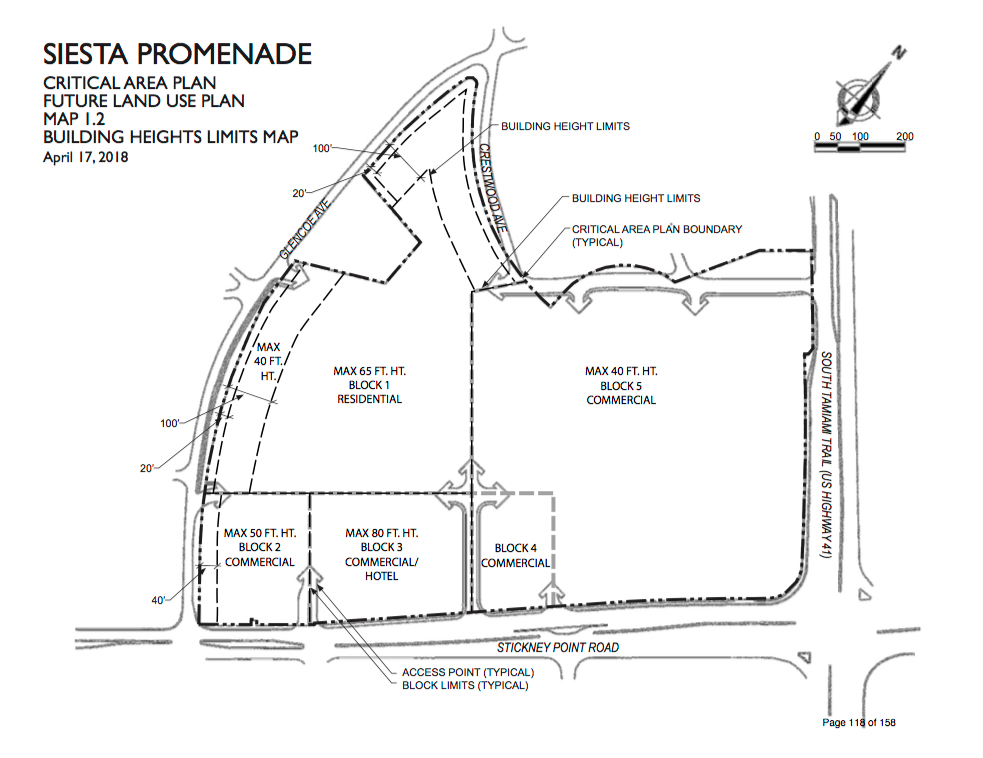 As Sarasota County staff has worked on its formal review of Benderson Development Co.’s Siesta Promenade application, neighbors around the site have continued to voice their opposition to the proposed density of the project.

Additionally, Sura Kochman, a leader of the Pine Shores Neighborhood Alliance, has begun to emphasize a new issue of concern: Based on her discussions with county Planning and Development Services Department staff, she says, each person who wishes to speak during public hearings on the project will have just the traditional 5 minutes to cover the array of facets related to the project. Not only is Benderson Development seeking the rezoning of the approximately 23-acre site at the northwest corner of U.S. 41 and Stickney Point Road, but it also is seeking a Critical Area Plan (CAP) designation for Siesta Promenade. The latter would allow the firm density up to 25 dwelling units per acre, instead of the 13 per acre allowed in county property with Commercial zoning.

Benderson’s most recent revisions of its proposal for Siesta Promenade call for a 130-room hotel, 140,000 square feet of retail/office space and 414 multifamily residential units. A county fact sheet issued on July 18 noted that, based on the hotel and residences planned for the project, the proposed density would be 20.8 units per acre. The 130 hotel rooms count as half units, county staff has explained.

Third, the county’s Planning Commission and the County Commission must determine the final CAP boundary for Siesta Promenade. While Benderson has sought to keep a circle drawn just around its property, Kochman — who has years of planning expertise — has pointed out that CAP boundaries typically encompass surrounding parcels. An extension of the boundaries for Siesta Promenade, she has explained, would give other stakeholders the right to express their views about the final design of the project.

Finally, residents of Pine Shores Estates — who would be the closest neighbors of Siesta Promenade — have been focused on Benderson’s proposed street vacations for the development, which would affect their community. “Benderson wants to take parts of neighborhood/county streets to use for ingress/egress,” Kochman wrote in a recent update for people who have been following the progress of the proposed development.

Kochman emphasized in that update that Planning and Development Services has determined that even though Benderson’s application covers four separate issues, “THIS project is being considered as one unified project and all items will be combined in 1 report for the [Planning and County commissions’] consideration. Public testimony is now ONLY one, 5-minute opportunity. Also, because of the potential for a large number of speakers, the [boards] may reduce this time to ONLY 3 minutes for each person to cover ALL FOUR items.”

She added, “In my opinion, this is a violation of due process and is limiting the public’s opportunity to express their concerns about four distinct issues.”

During a telephone interview, Kochman asked, “How does [the Planning Division] decide how much people should be able to say?” referring to the plans for the public hearings. “The audacity to determine that the public doesn’t have the full right to speak … is absolutely mind-blowing!” she said.

In response to other questions, county Planner Steve Kirk — who has been given oversight of the project on behalf of the Planning and Development Services staff — wrote in an email that all facets of the Siesta Promenade application “will be scheduled for public hearing at the same date and time. I believe the Planning Commission and the [County Commission] have the option of opening one hearing and taking public comment on all applications, or opening separate hearings for each application.

Historically,” he continued, “both the Planning Commission and BCC have taken public comment on multiple applications at the same time when the applications are interrelated.”

The issue of combining a number of petitions during a single public hearing came up earlier this year, as the County Commission was considering Neal Communities’ proposal for its Grand Lakes development east of Interstate 75 and south of Clark Road. One resident concerned about the density of that project — which won board approval in July for up to 1,097 homes — sent a March 6 email to Deputy County Attorney Alan Roddy.

“The BCC [Board of County Commissioners] Rules of Procedure affords individuals the opportunity to speak for five minutes on the hearing subject at public hearings (unless modified by the BCC),” R.N. Collins pointed out. “Standard board procedure at simultaneous hearings, however, has been to limit each speaker to a total of five minutes,” he continued.

When Sarasota County Planning and Development Services staff announced in the latter half of July that it had begun the formal review of the Siesta Promenade application, it explained that the process would take about 45 days. Then, the first public hearing would be scheduled before the Planning Commission — likely 30 days after the completion of the formal review. The final hearing, before the County Commission, would be expected to follow within about 45 days, staff added.

Kirk also said in the Aug. 7 email, “No public hearing dates have been scheduled.”

Benderson Development did schedule its required Neighborhood Workshop on Aug. 23.

Yet another concern has bubbled up again for Pine Shores residents, as Benderson Development seeks final approval of Siesta Promenade.

In reviewing the latest county staff compilation of Benderson’s applications for Siesta Promenade, Kochman found a document — dated April 17 — that showed the planned heights of buildings on the site. The hotel would have a maximum of 80 feet, for example, while one residential block next to Pine Shores Estates has been marked up to 40 feet in height and the block adjacent to it is listed at a maximum of 65 feet.

Further, a commercial block across one street from part of Pine Shores Estates would stand up to 50 feet tall.

In her recent update to interested persons, she wrote, with emphasis in some sections, “There are three, 40-foot apartment buildings; two, 65-foot apartment buildings; one, 50-foot retail-office-restaurant building as well as one, 80-foot hotel/restaurant/retail [structure]; plus six, 35-foot additional retail/restaurant/office buildings being proposed. A total of 13 buildings. Buildings of these heights would be towering over single-family dwellings in the neighborhood,” she stressed.