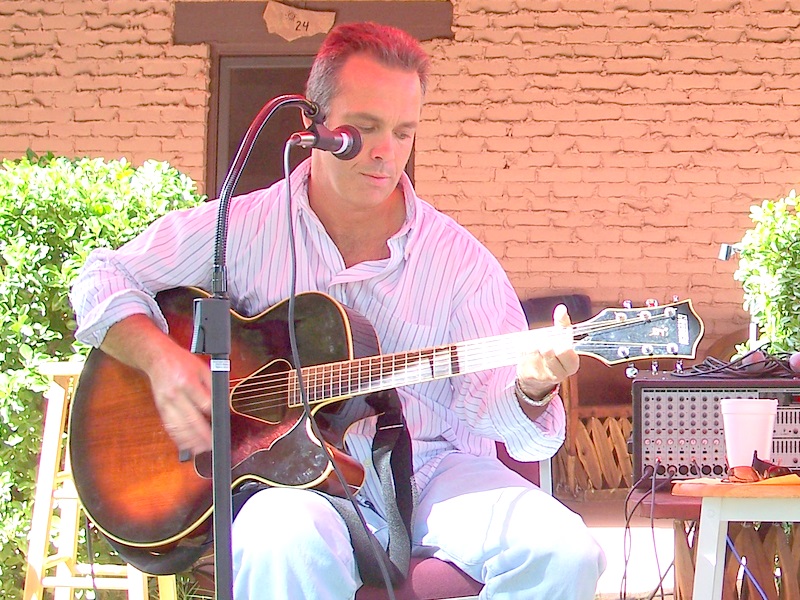 What is it about the New Year that fills us with such hope and optimism? There’s just something about releasing all the heavy baggage of the previous year and turning our gaze forward to a fresh start that somehow makes everything seem possible. One man who knows full well the joy of a new opportunity is musician Chris Connolly; he had a spiritual experience … sort of a divine intervention … in healing from addiction. Refocused now on his ongoing spiritual journey and his music, 2019 is spread out before him like a smorgasbord of wonderful learnings and choices. He describes his performance music (for when it’s just him and his classic ’65 Gretsch up on stage) as “a variety of upbeat and easy classic rock and jazz.” Which certainly seems appropriate considering the choices he’s made in life.

Born in the Bronx, Chris settled here in Florida after a lot of moving around. He’d lived out west for a while in Arizona and Texas, spent some time in Colorado, and also in Washington State. When as part of his healing he drifted down to Florida, that was that, he never left; the vacation turned into residency in a new state and it just seemed meant to be. That was five years ago and appears to have been a good decision as life fell into place as smoothly as if the move had been carefully planned.

Chris’s musical career also fell into place. His mom had gotten piano lessons for him when he was a young boy and then … like many teenagers … he discovered rock and roll and switched to guitar. The instrument was a gift … for a birthday or Christmas, he can’t recall which … but he took to it right away and is totally self-taught.

Once settled here in Florida he quickly met and made friends with several of the local musicians, one of whom asked him to come play lead guitar for him. This turned out to be an unexpected break in a rather strange way: as time went by his friend was not able to make the gigs, leaving Chris to take them over. As a result his friend’s agent contacted Chris and offered more opportunities to play. And just like that, Chris Connolly had a new home state and a very satisfying new career that was his alone. He savored his new surroundings and friendships, often sitting in at gigs and jamming with the guys he met. By now, some places were becoming especially comfortable favorites of his.

One particular room where he feels very at home and has had successful repeat engagements is the Siesta Key Wine Bar in Siesta Village (5138 Ocean Boulevard), which is locally owned and operated by the Gamble family. Chris is proud to have been tapped as their musician of choice for an upcoming special event this month: The Wine Bar has undergone an impressive major renovation and is gearing up to celebrate with neighbor businesses (Local Chill Ice Cream, Swell Things, and the new Island House restaurant) in a ribbon cutting party. The event is scheduled to be held on Wednesday, January 9, from 5 to 7 p.m., and yes, Chris Connolly will be the featured entertainer for this early evening group event, after which the celebration continues in the Wine Room Bar.

Asked about his own preferences in music, Chris says he really loves a lot of different styles and genres, but finds himself particularly drawn to the “more complex forms,” chief among his favorites being jazz/rock fusion. Considering that he’s lived a pretty varied and complex life, it makes a lot of sense. But when playing for others, he thoroughly enjoys performing music that makes the audience feel happy and uplifted. “And I love audience participation,” he says. He’d also like it if some of his fellow musicians who enjoy performing this style of music to feel free to drop in at his gigs and sit in with him.

2019 looks to be a year in which Chris Connolly’s approach to music and his life will be in synch: it’s all good.