When Sarasota’s infamous noise ordinance killed southwest Florida’s thriving music scene, it drove away some of our most talented performers. Those who stubbornly stayed and dug in were unwilling to throw away their Florida friends, fans, family, and lifestyle for more promising music scenes in other areas. As once-lively clubs suffered right along with the players, what remained was a sort of “survival of the fittest” that left standing only those with more to offer than mere talent… not to sell talent short, but in a tough market it’s simply not enough. Talent without business sense and discipline won’t keep the gigs coming and the rent paid.

Mark Waelti, half of the duo RPM, readily acknowledges that it’s been discipline as much as talent that kept him and band mate Randy Marsh in solid bookings for 32 consecutive years. And yes, they did start out when they were mere children. <grin> They had the talent part down before they even met and were, in fact, working with others when they met at what was then the biggest, hottest club in Sarasota: the Sawmill Inn. That room’s long gone now (as are Mrs. O’Leary’s in Gulf Gate and so many other where they played in the early 80’s), yet RPM just keeps going strong, constantly picking up new venues while remaining loyal to those they’ve played for many years. On Siesta Key that means their 18th year at Gilligan’s in Siesta Village (Tuesdays and Thursdays, 6 to 10 p.m.) while  just off  the south bridge of Siesta you’ll find them at the Boatyard (Wednesdays, 5 to 9 p.m.).

But back in the 80’s Randy was soloing and Mark was working in a band. They sat in with each other now and then, played and sang well together, so when circumstances changed they just naturally began officially working together and called their duo RPM. When I asked Mark if he’d ever had any inkling that he and Randy would still be going strong with RPM 32 years later he laughed “Oh heck no!” But they are, and I wondered what had made that possible. Mark says that time really does fly when you’re having fun, and that they have been even though it’s also hard work. Before they knew it they were at The Players Theater with their fans celebrating 20 years together, and then in October of 2016 at the Venice Theater marking 30 years.

In an area where musicians are often struggling to find work, RPM consistently plays six nights a week, is booked a year ahead, and is constantly turning down offers. If they could clone themselves, these guys could play enough gigs to rule the music scene in all three counties of our tri-county area. Whether playing clubs, corporate parties, or beach bars, RPM is always a crowd pleaser, partly because they have an amazing repertoire and have never worked from that traditional set list taped to the back of their guitars. They both said that they play “whatever people want to hear right then.” Sometimes it’s somewhat venue-specific, other times it may be driven by the mood of the moment, or influenced by the season. Whatever is called for, they’re ready, and even regular fans never get bored because they never know what they’ll hear next. It may be Paul Simon, Jimmy Buffett, James Taylor, Willie Nelson, Johnny Cash, Zac Brown, and lots of the best songs you’ve heard over the past few decades. And maybe even some you haven’t; Randy is no small talent in the writing department. His originals are every bit as polished and professional as that of the most talented national artists, including those just mentioned. With all this it is no surprise they’ve made five CDs. 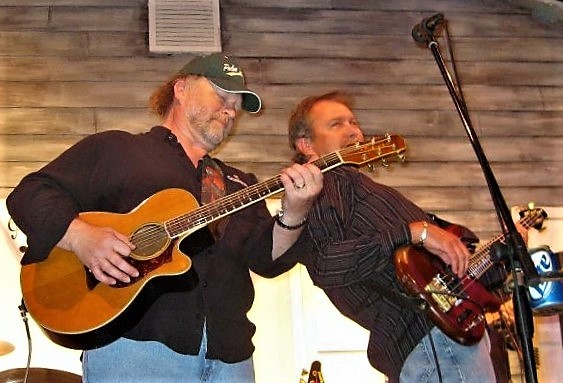 These opposites not only attract but work very well together. Randy gets immediate credit as “the musical side;” he works out the arrangements, keeps the equipment in shape and covers that part of RPMs work. Mark, who for five years had a management company called Wa-Hu Productions, covers bookings and business. He says he thinks the fact that “Randy and I never get in each others’ way … and have never borrowed money from each other!” has contributed to their longevity as a duo. On occasion it stretches to include additional players Michael Finley on drums, Tim Towel on electric guitar and mandolin, and on rare but welcome occasions Billy Day joins them with keyboards; this expanded version is billed as The RPM Band. Their success, he feels, comes from not only a mutual respect for each other and the additional players they work with but for the audience and the club owners as well.

Doing this well for this long and still enjoying it is no easy feat, but it’s a rare treat for area audiences to know that any time they go to hear RPM it’s going to be great music performed professionally and happily by their friends of more than three decades. That is hard to beat.

Charmaine Engelsman-Robins is a Chicago-born, award-winning writer of screenplays and articles, including a 10 year stint writing for the Sarasota Herald Tribune. She has lived in SW FL most of her life and, as an animal rescuer, has occasionally been forced to support this work with temporary straight jobs that she lists on a secret “resume” titled “My Little List of Things I Never Want To Have To Do Again.” She won’t have to if you keep reading her articles, and she thanks you all very much for saving her from that horrible fate.

Tribute to a Drumming Warrior