Twinkle Schascle Ursula Yochim’s big, long name matches her big personality, big smile, big voice, and big heart. What instantly endears her to crowds, turns strangers into fans, and fans into friends, is that in addition to the astounding talent she brings to the stage, she brings a warm, positive vibe to the world. She genuinely cares about everyone and is probably the most accessible talent any audience ever embraced.

Her “flower child of the 70s” appearance is not persona; it’s who she is… the visual confirmation of the person inside. Everything that was good about the 60s and 70s lives on not only in Twinkle’s music but in her heart with eternal optimism and the belief that everyone has the capacity for good. She hasn’t lived a charmed life of airy-fairy naiveté, and openly speaks of her struggle with alcoholism. Add the challenging times of taking on a major record label that wanted to change her, all the familiar challenges of young love and motherhood (and now grandmotherhood, hard as that may be to fathom), and you find an extraordinary talent inside a woman  who is everyone’s gal pal, bff, sister, girlfriend, family member. Maybe what most makes her a star is the seamless combination of her extraordinary talent coupled with her “I’m just a beach girl” comfortable ease with herself. She’s a real person whose accessibility to and love for her fans endears her to them every bit as much as her talent does.

When her Warner Brothers album “Haunted by Real Life “* was released in summer of 1991 (under the artist name Schascle) a gorgeous full page ad of the album cover adorned industry mag Billboard. Warner sent a crew to Florida to make a video, so at the old Crosley Mansion, Twink and top local players did her original tune “Can’t Get Love With Money.”**  VH1 immediately put it into heavy rotation and a heady period of guest-VJ-ing (remember when music channels played music?) and meeting many of her musical idols followed. Adoring fans who had cheered her from the start felt like the journey was over; the local girl had made good and everyone was thrilled for her.

But life is never that easy. This girl who began singing in bars and clubs before she was even old enough to be legally admitted to those rooms was now a young woman who still had a long road ahead of her, and much of it was rocky. Along with dealing in the world of less-than-nice business people, presumptuous club owners, and dishonest managers, she also carried the troubles of any normal person … and alcohol was an especially destructive problem for someone who worked surrounded by booze and fans who showed their love by constantly sending drinks to the stage for her. What is a monumental challenge for any regular “nine-to-five then home-for-dinner” human being becomes magnified many times when your life is spent in the public eye and bars. It was tough.

Behind the smiling face and soaring voice and filmy flowered shirts, a battle royal was raging every moment of every day. Twinkle doesn’t look the least bit like a tough person, but her determination to get and stay sober while working in such close approximation to her worst enemy (alcohol), could have easily undone a lesser spirit; her determination to refocus on the life she believed in was indomitable, and with great effort, she did it.

Today living in a family compound in rural southwest Florida, Twinkle says that “the peace of this sanctuary, and the energy of playing gigs in the city, is my perfect balance.” Soaking up the love and nourishment of family and friends gives her the strength to get out there and knock you off your seat when she moves in on a mike. One minute she may be cracking audiences up by singing to a band member “… put your left foot on my right shoulder…” and when he pretends to be trying to manage that maneuver gets her dismissive “not NOW, fool!” A few minutes later her rendition of Dylan’s “Knockin’ on Heaven’s Door” has big burly guys in the audience spellbound, transfixed and teary. When everyone’s warmed up and ready to rock, she hauls out the heavy stuff (like “My Hate is Real.”***) From the silly to the soul wrenching, R&B to rock, blues screaming to soulful crooning, Twinkle owns whatever she sings. 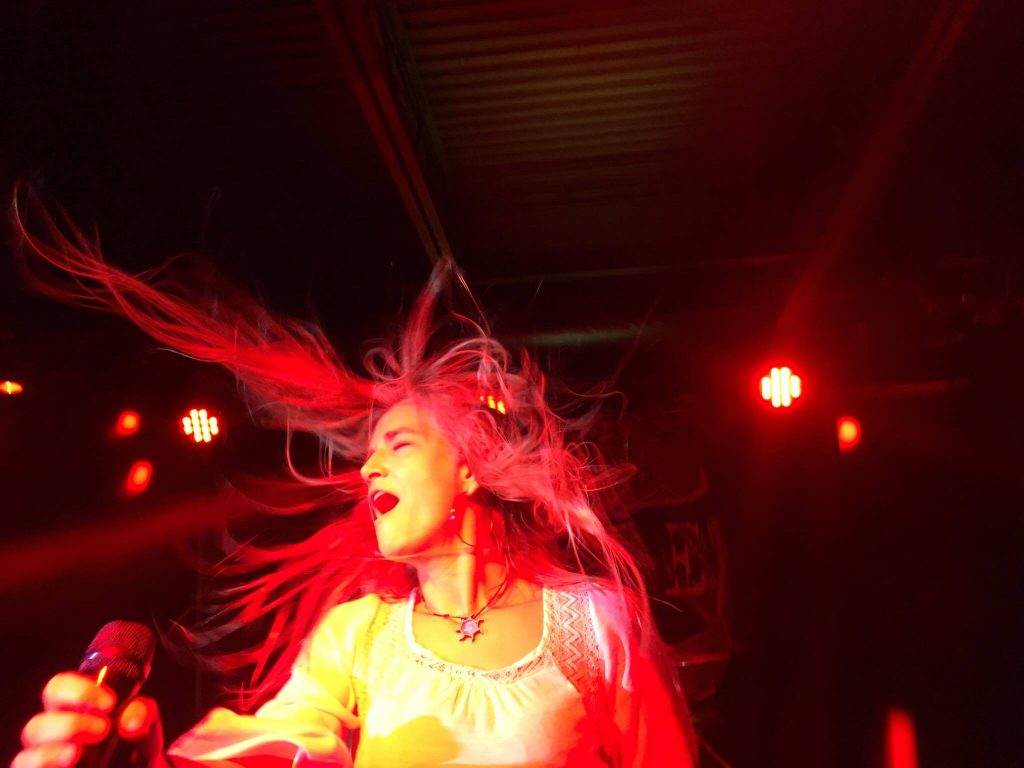 A lot of the credit for the seemingly perfect sound is shared by Twinkle with her aptly named group Rock Soul Radio (because they are, after all, a rock band): drummer Benny Puckett, guitar player Lenny Brooks, bass player (and, in an interesting side-story, her not-discovered-till-mid-life blood brother) Tony LeClerc. Twink notes that Tony does double-duty by handling the booking (941.565.5648) and says none of them could do this without the able assistance of crew members Scotty Thames, Tracy English, and Benton Byrd.

Fresh off a European tour (which included an accompanying entourage of 30 fans) the big news in the band’s immediate future is a fate-driven recording date, the origins and execution of which we’ll have to share another day because it’s a fascinating “it could only happen to Twinkle” serendipitous story that can’t be done justice in this space.